Skyrim and the absence of wargaming.

In the final weekend of the Christmas holiday, over the New Years weekend, I finally managed to get my gaming computer up and running again. It was not that I didn't know, there was just no time to play around and find out which parts needed replacing. My friend had been looking after it for almost 18 months and eventually we tested it and found out that the processor was shot.

I found a reasonable processor, more powerful than the original and plugged in. Of course, I had no internet though, as on the 30th December, when I thought it would get connected, I realised there had been a miscommunication and I was going to be waiting until the 16th Jan. New years plans were done for as my wife tends to go to bed early on New years and I play games online (sad? Maybe, but actually enjoyable). On 1st Jan, I asked my new neighbour if I could borrow his internet and he gloriously accepted my proposal. I began making 2.5 years worth of updates to Windows and various games.

This weekend just gone I deleted all of my Skyrim mods and began fresh. I have turned it into a more realistic RPG where I have to take care of other basic needs, stay out of the cold for long periods, and avoid dying. I have made a new character who is a bow and dagger carrying huntsman. Over this weekend I managed to amass enough money to buy a house in Whiterun (the first city you get into on the main quest line) and am now pausing to decide what to do. I have a fixed abode now, which is great, but I want to spend most of my time in the wild, hunting animals and killing bandits.

As such, my model making has suffered. I had originally had plans to paint. I guess starting at a new school and getting to know the system, students and writing reports already has taken a lot of my spare time. Such is life.

Here is an old character killing a dragon. 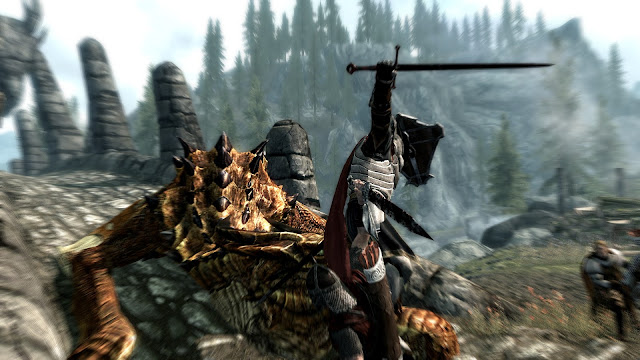 6mm Sci Fi
I am pleased with the progress of my 6mm Sci Fi project. I love the scale. I love the miniatures. I love the rules I have. The space and cost saving elements of this scale have dramatically increased my desire and ability to continue my hobby in a certain direction this year. If I were still trying to force out some buildings for 20mm WW2 gaming, I would be struggling. This year I have created many different miniatures for differing factions.

Worldbuilding is also something I have been doing more actively as I want something for my miniatures to fight over. I also want them to be people to care about and connect with. I have a couple of note books with sketches and ideas for different campaigns and story arcs for certain characters (Rhoro et al.).

6mm WW2
This began in September. I have so far only painted a few German soldiers who remain unbased. I haven't really touched them since then, but I do hope to get them off the bench before Easter this year.

20mm WW2
I have done nothing this year, save not putting them away in the attic with the house move. My intention is to take them to my new school and use them to help begin a wargaming club.

PC Gaming.
This used to be a large part of my life, but my gaming rig has not been switched on for 2.5 years. I just got it fixed and connected to the internet. As I type this I am upgrading to Windows 10 with the hope to get it working to game a little. For the past three Christmases I have loaded up various old games on my 8 year old laptop and played a little. It became a tradition almost. This year is the final year of that, because now I have space and a working gaming rig, I intend to play a few more "dad" games in the evenings when I don't have time to paint. "Dad" games are games I can dip in an out of. Games I can load up, shoot things for 20 minutes, then turn off. As such I will be making an appearance over on Planetside 2 and probably World of Tanks after a 3 or 4 year hiatus.

Boardgaming
I had a large resurgence of this hobby over last Christmas. This year has been on the disappointing side. I intend to play more, but who knows if I will. I will be taking certain games (Pirates of the Spanish Main, Star Wars Miniatures, Star Wars Pocketmodels) to school to use for my wargaming club. Who knows when I will actually teach?


Overall I am happy with the time I have managed to devote to my hobbies this year. I just look forward to next year and will see where things go. I will make another post tomorrow about my plans for the coming year.
Posted by James at 10:58 pm 2 comments: