See parts one and two for more information.

Tedrion City is besieged. The roads are locked down by PAC forces, the jungle too impassable for large scale escape. The troops of the Western Alliance are faced with defending to the last man, starving to death, or attempting to break out. The Alliance commanders have promised a supply drop to an airfield near the PAC lines. If it can be secured, supplies and reinforcements may be able to be dropped in to surprise the PAC attackers. It falls to a unit of Alliance regulars to attempt to secure this airfield. 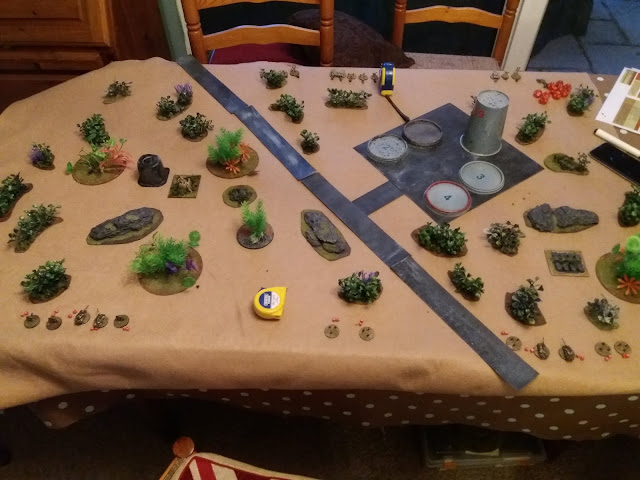 The control tower of the airfield on the right is an objective. Another objective is the backup generator over on the left. 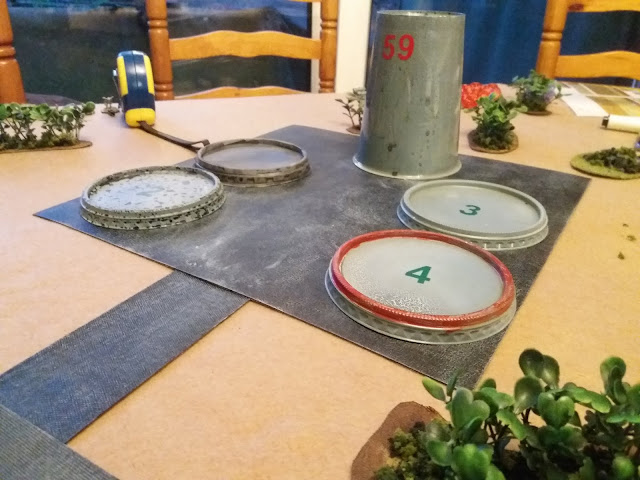 The airfield with it's four landing pads that needs to be secured. 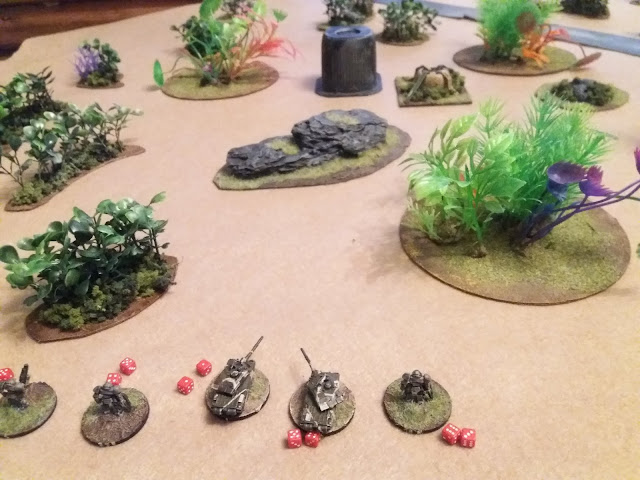 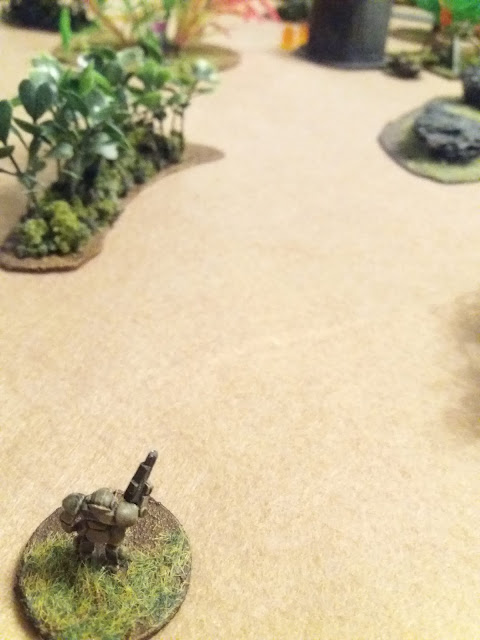 The Alliance mech fires on the advancing PAC mech dealing severe damage to its armour. First blood in this engagement is drawn. 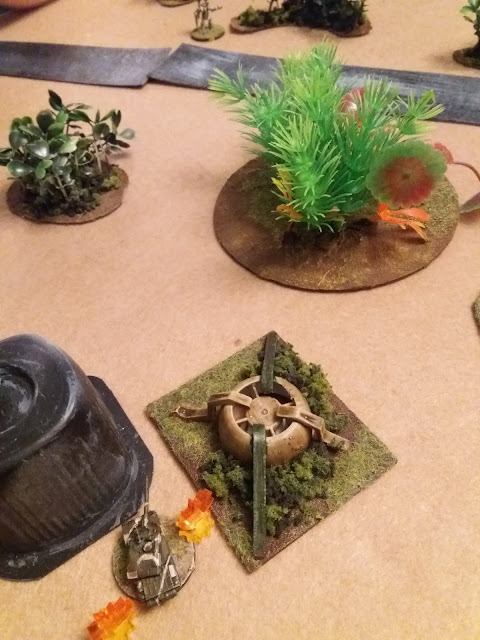 Further engagements around the generator. The fighting on the left flank is getting heavier and drawing in more of the Alliance mecha and tanks. 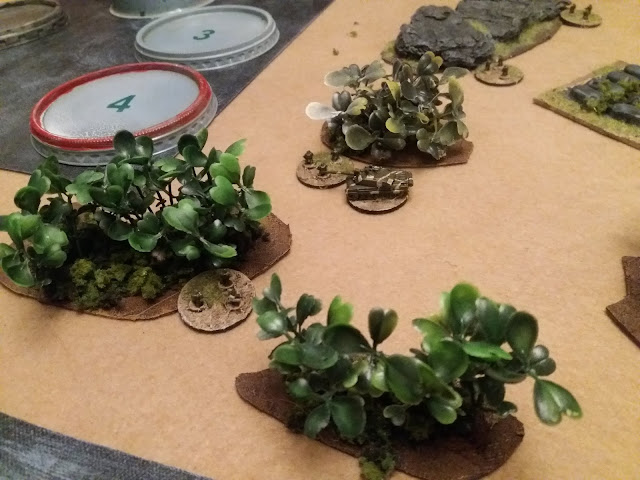 Alliance infantry and armour advance on the airfield, setting up a battle line to wait for their mecha to clean up at the generator. 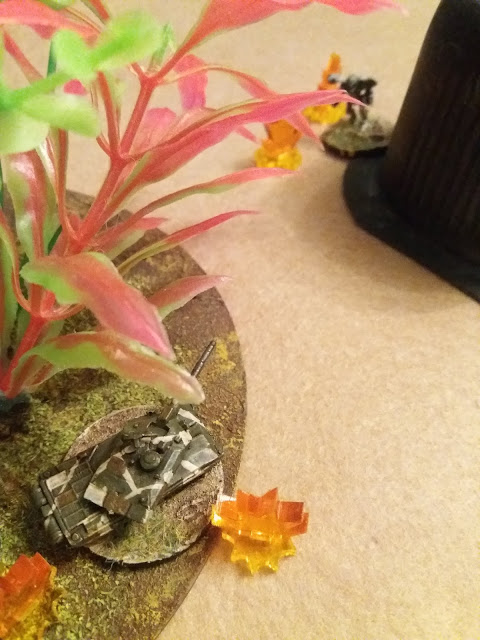 More heavy fighting at the generator leads to the destruction of the PAC mech, blowing to pieces and damaging the generator. 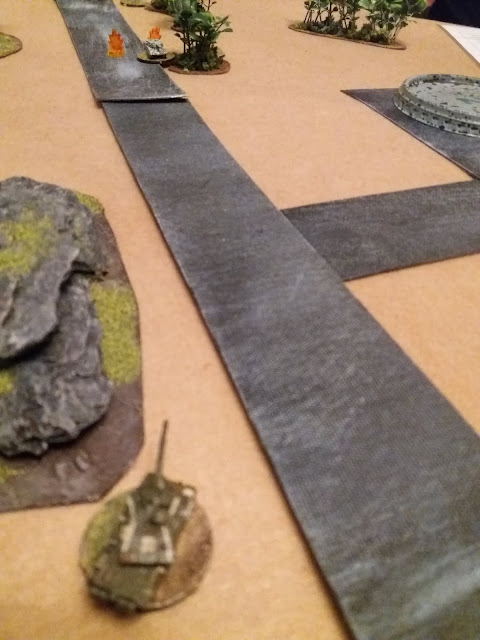 Advancing up the central road, a PAC tank falls under heavy fire from Alliance armour. The fighting over the generator is heating up and draws more armour from the Alliance in, leaving the infantry heavy battle line to go on the defensive. 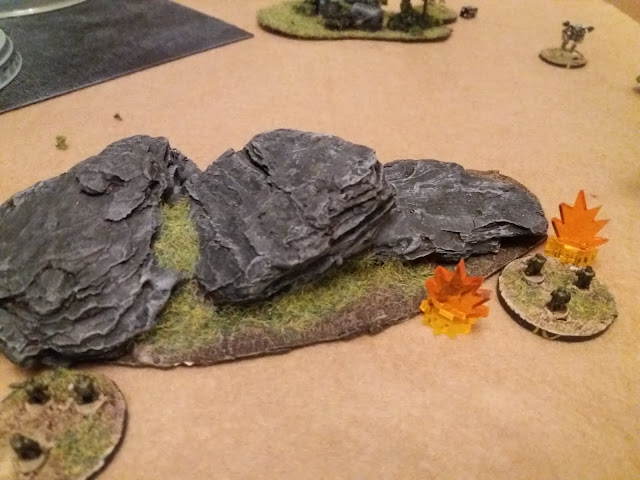 Unfortunately for the Alliance, some PAC mecha advance along their flank and begin rolling it up, shattering dug in infantry and destroying armour. The remaining units retreat across the road towards the generator where the Alliance mecha and armour have mauled the PAC attackers.

Exhausted from the fighting each side begins digging in on opposite sides of the road to await reinforcements. If they come.

This is the second game of Horizon Wars I have ever played against an adult human. It was great fun, although I found it difficult to stick to the rules entirely as I am used to fudging things to help the narrative of the battle when I play solo.

I played my brother who is visiting from the States and he had been interested in trying my 6mm sci fi wargaming. It was a success and hopefully a seed has been planted.

I didn't take as many photos as normal because it seemed like a faff interrupting the game.
Posted by James at 7:37 pm