I don't have enough hedgerows/bocage. I have a handful of garden hedges, neatly trimmed, nice to look at. But I don't have anything I can cover a table with to represent Normandy, or anywhere with hedgerows lining the roads. This has been a serious problem for me, as it has stopped my ability to host my own games. I feel that if I can cover a table in hedges, I can at least have some sort of skirmish out in the fields. I could then add in some houses, as and when I complete them.

So, over the past few days, I have been experimenting. Here are a few of my failed projects:

This is the sponge of one of those bricks I picked up. I cut it roughly, stuck it to some card, and painted it two colours. The result was very disappointing. I see very little potential here, so left it alone. 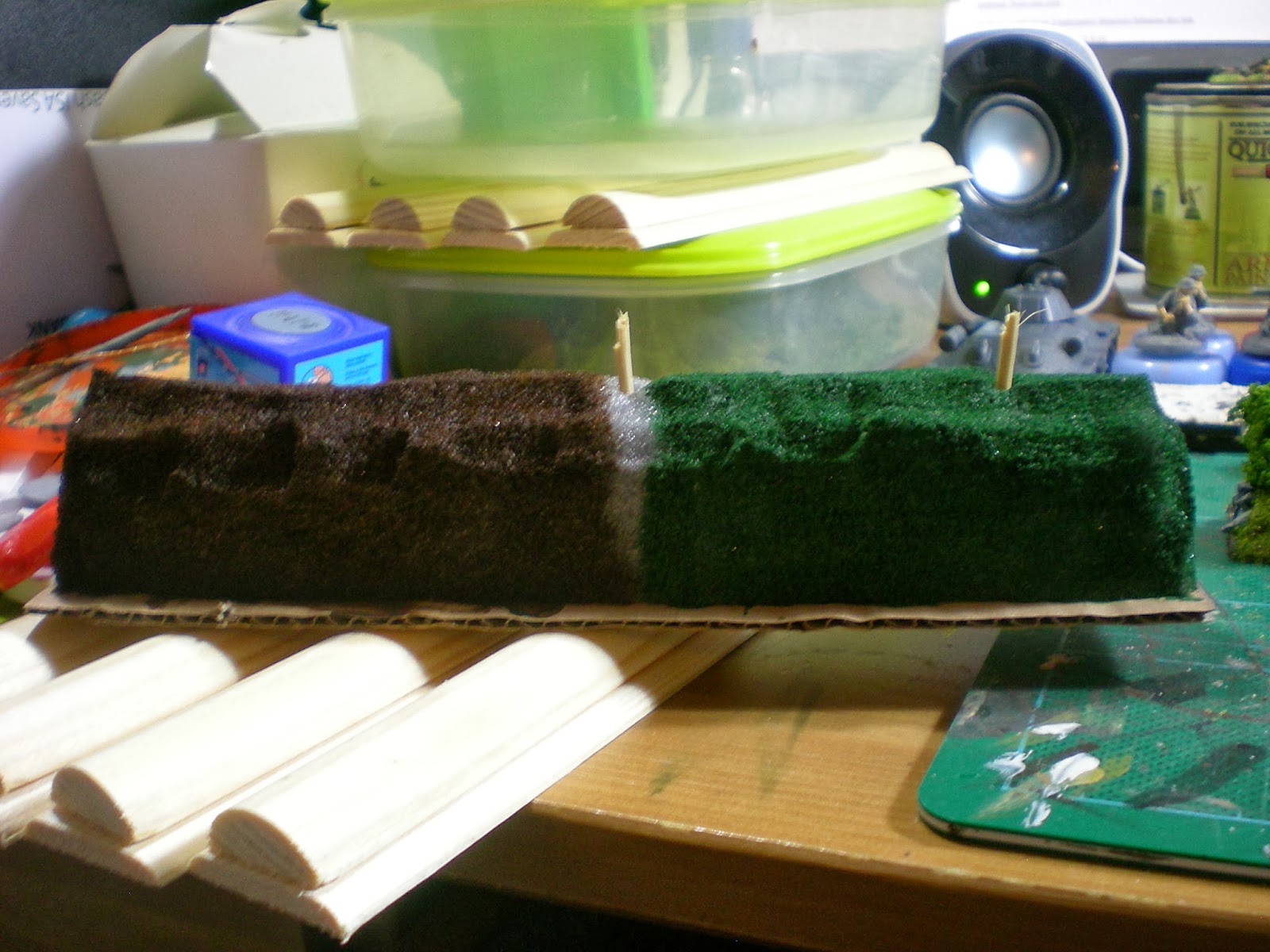 This is the first layer of cat litter, stuck onto card. The watered down glue warped the card. Had I based them on wood, or plastic, it may have had more of a future. But as is, I won't be taking this design any further. There was a similar one, with layers of card, but that was also disappointing. 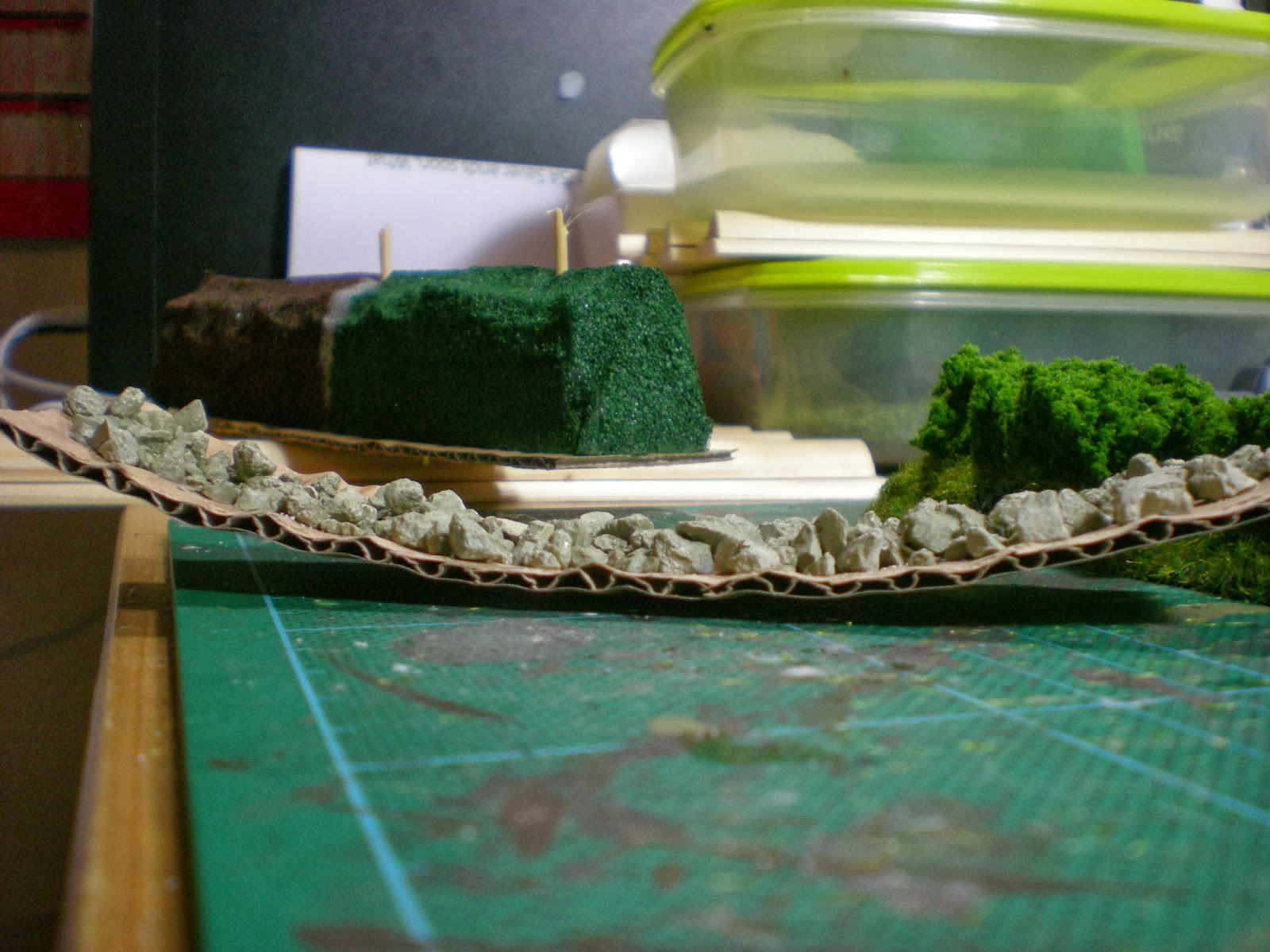 Inspired by this blog post, I decided to try something more substantial. I ran down to B&Q, and picked up some wood. I got some 8mm half doweling, along with, what I believe is D wood. I don't know. I bought 2.4 metres of the stuff, chopped them up, glued them together with PVA. 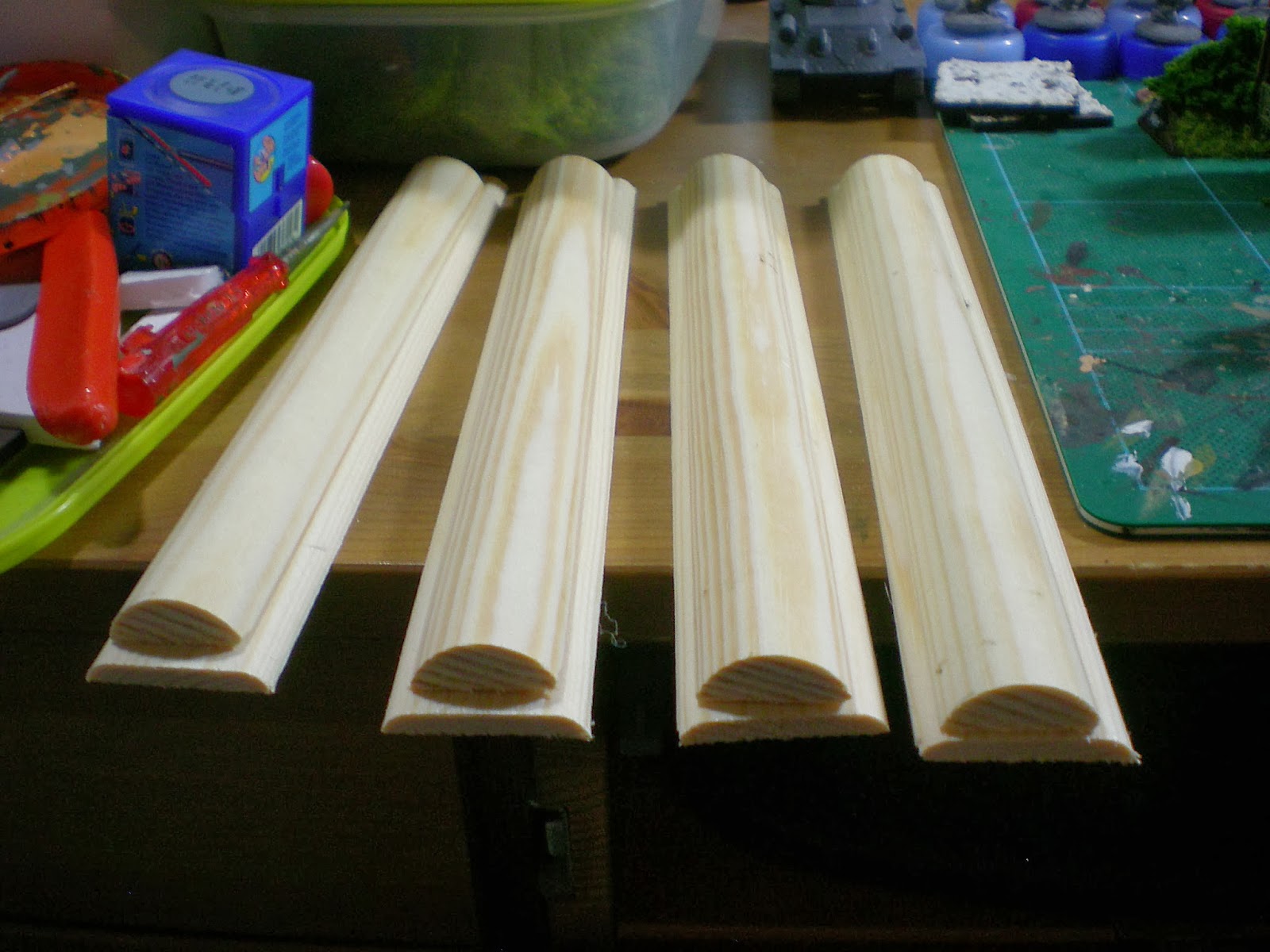 On the first two, I just stuck some clumps of cat litter, sprayed them with my hideous, black primer spray (designed for cars...). I quite like the finished product. BUT on the next one, I have attached clumps of cat litter, then coated the whole thing in bird sand. I will be spraying it black in the morning. 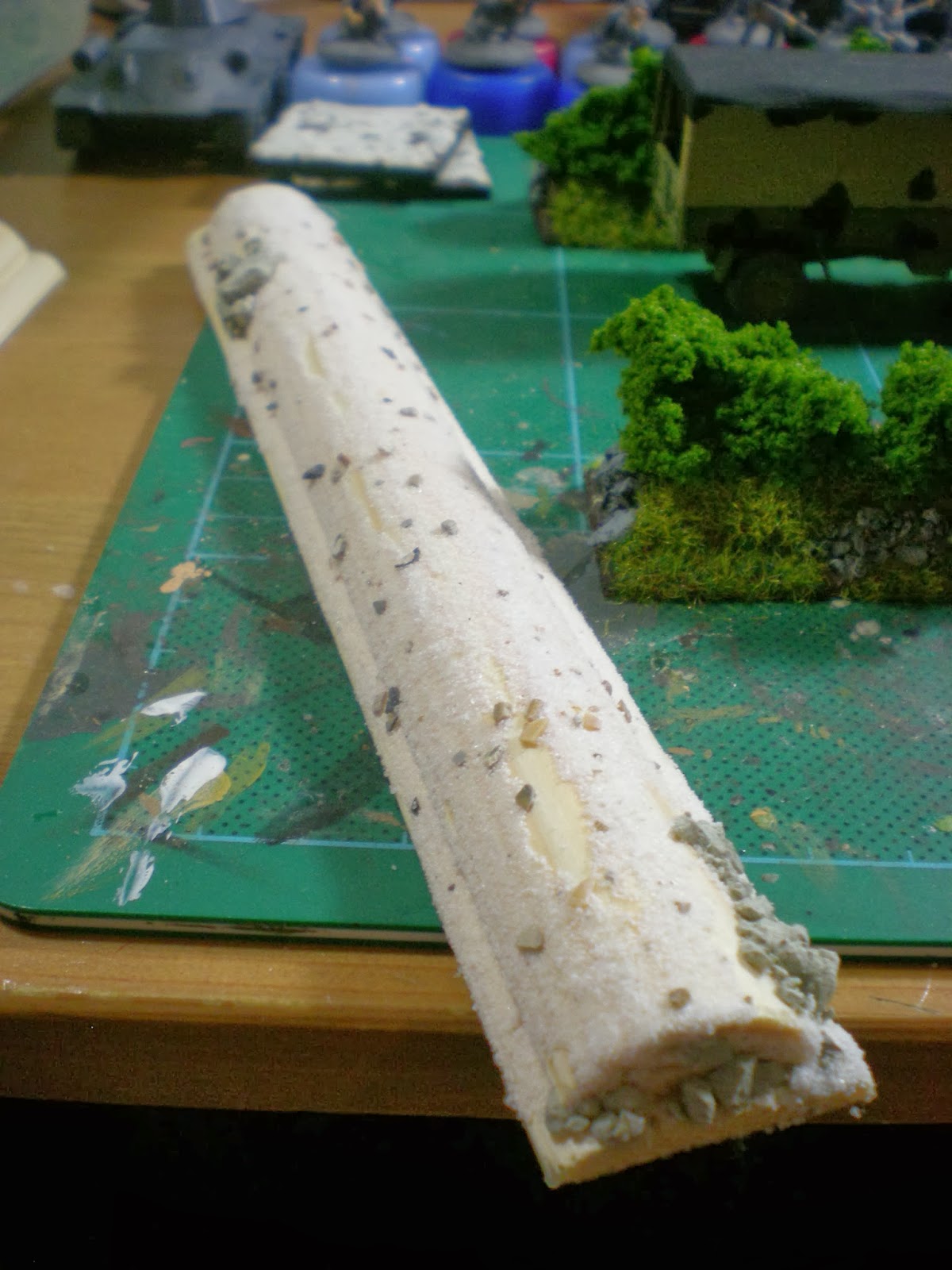 These are the two with no bird sand. I dry brushed the cat litter a light grey, painted the whole thing brown, covered it in static grass, and used some woodlands scenic foliage clumps on top. 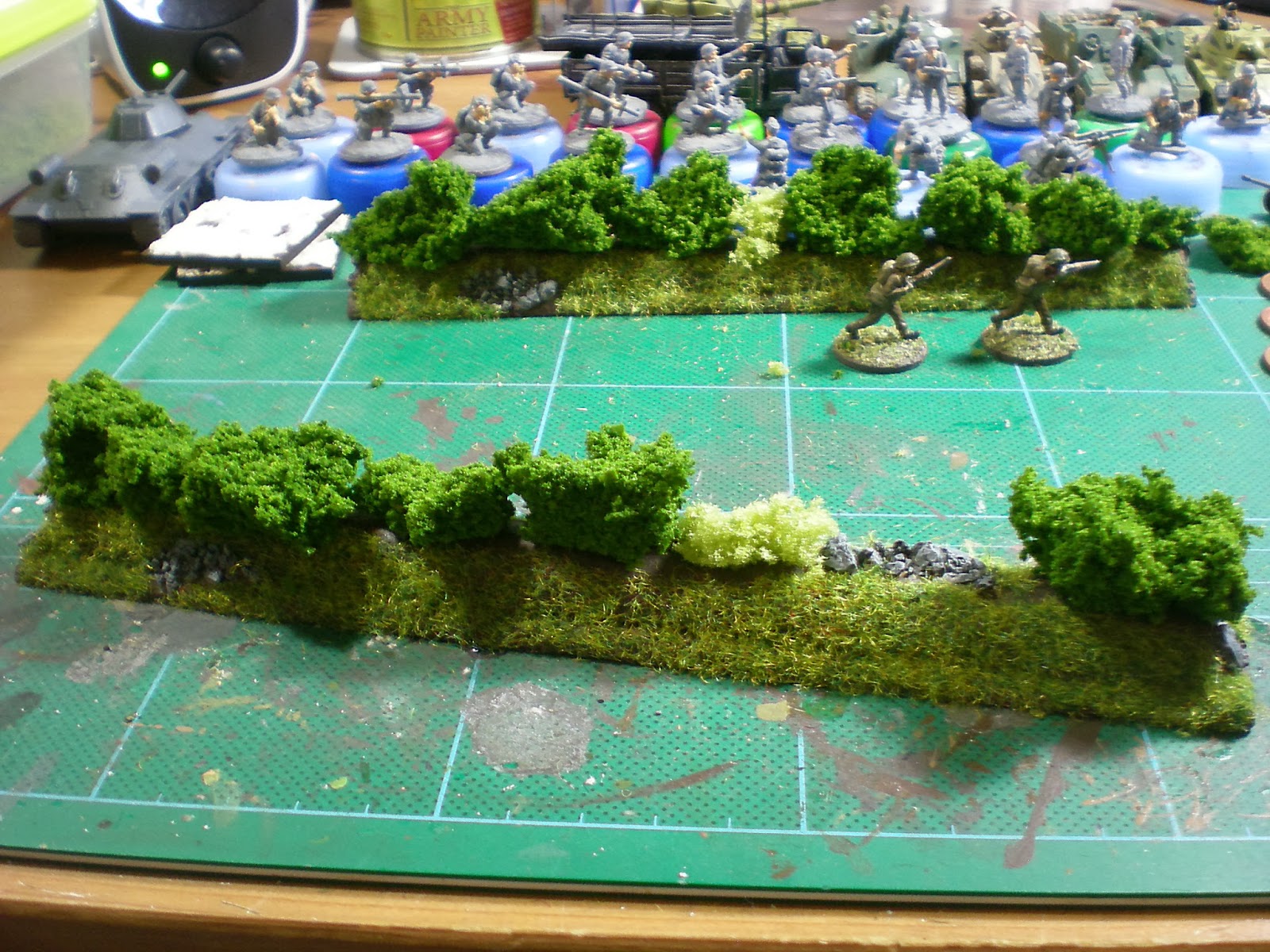 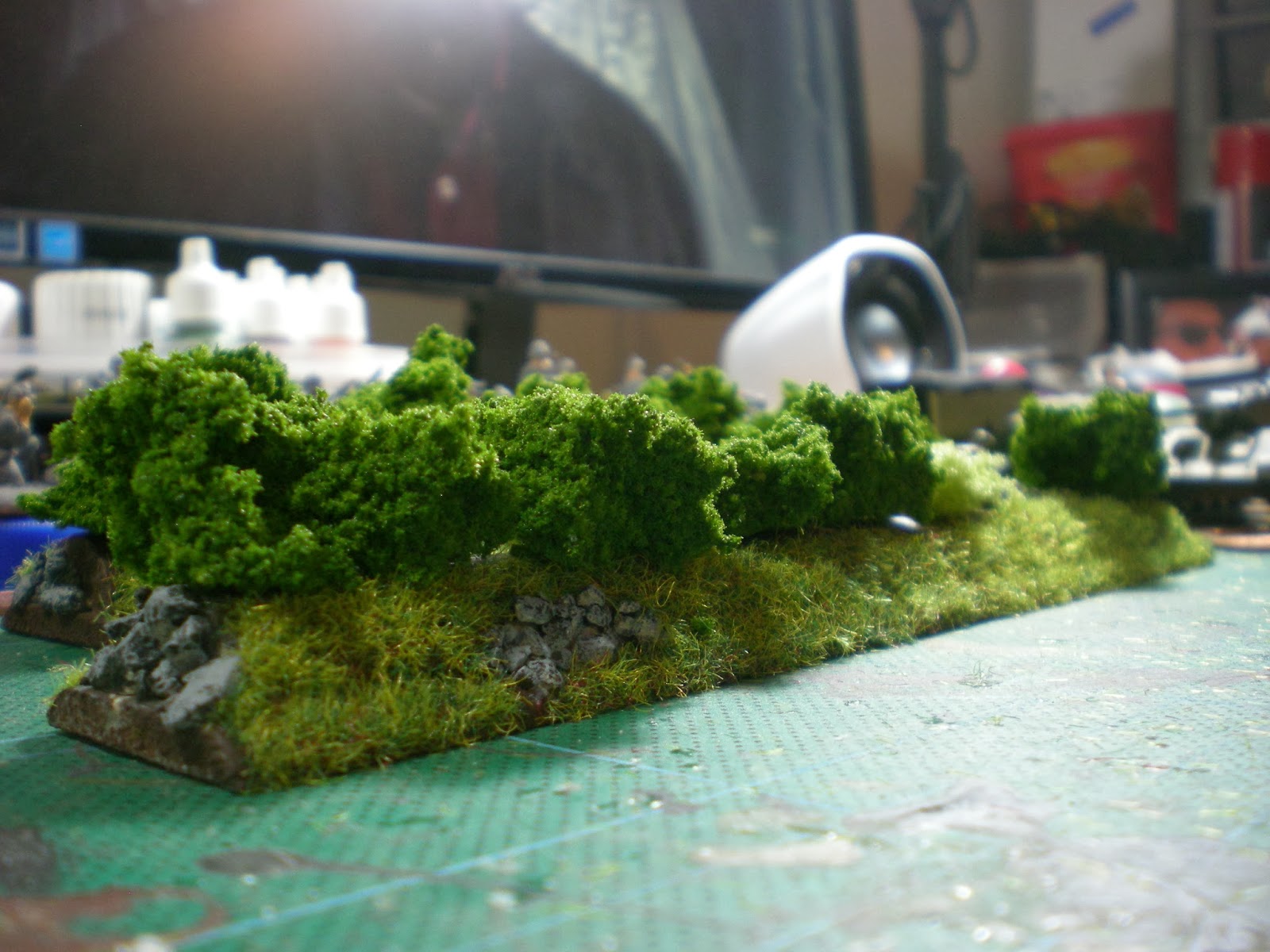 I am very, very pleased with the result. I have found my hedgerows! The plan now is to see how the bird sanded one looks with less grass on it. I want to dry brush it lighter colours and leave some bare patches.

But as it stands, I will be using this as my future recipe. By the end of tomorrow, I will likely have put together just under eight feet of hedgerows/bocage. Ideally I want at least twenty feet. I will probably end up getting two more lots of 2.4 metre sections and just throw it all together by the end of the week.