Hidden in the jungles of Neu Europa lies a research centre. The locals know it exists, but also know that one doesn't go wandering in the jungle there. The colonization efforts on Neu Europa were spearheaded by HySys GMBH, and it lies in a system that is contested by the UCS and the Collective of Systems, which can lead to interesting situations. 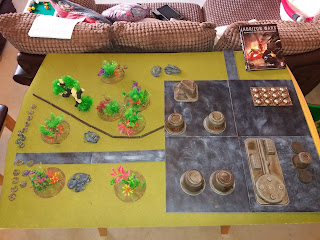 A distress signal is emitted. It is picked up by the both the UCS and the Collective. Each government wants to gain a foothold in this system so send forces to investigate. 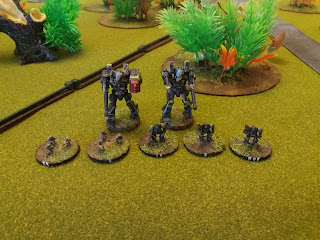 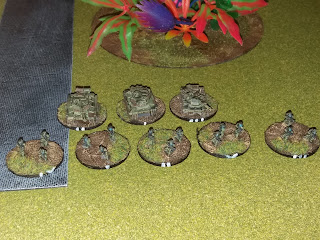 UCS forces consist of 5 elements of heavy infantry and 3 heavy tanks. The tanks can move faster, but do not want to get too far ahead of the infantry. They will advance up the road from the West, hoping to stop the Collective securing the facility. 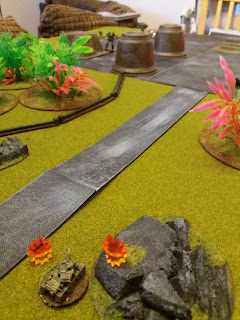 After advancing, the beast mech takes the opportunity to fire on an advancing tank. Shots explode around the tank, but nothing hits true. All buttoned up inside, the commander orders his crew to return fire. 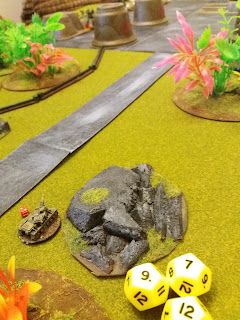 Returning fire the gunner manages to score a direct hit, severely damaging the defense capabilities of the mech. Lucky shot, or experienced crew? 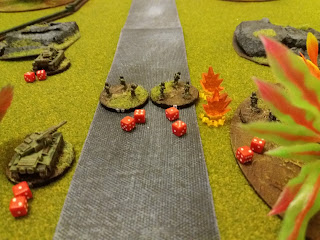 Fire rains in on the advancing infantry, who should have probably taken better cover. Learning from their mistake, they scurry off the road and decide to sneak up the right flank, but not before first squad take some casualties. 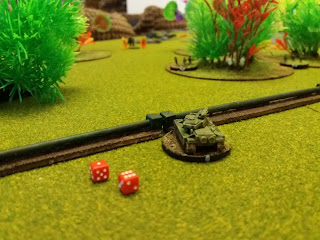 Commander Rowner advances and opens fire on the flanking Collective mechs doing critical damage to the movement servos of the lead mech. 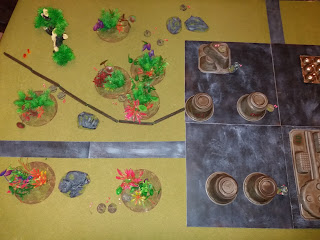 The Collective are beginning to dig in and fortify their defense of the research facility. The UCS force is slowly advancing, picking away at the defenders. 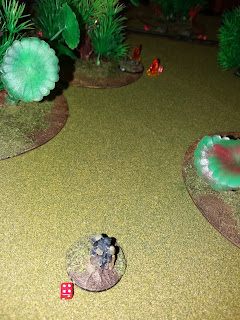 The flanking mech tries to suppress the advancing infantry, and manages to inflict some casualties, but nothing they can't bounce back from. 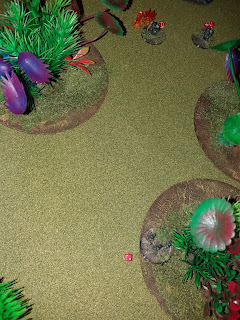 In fact, they bounce back straight away, chipping away at the armour of the mech. The mechs need to lay down more fire to disrupt this advance! 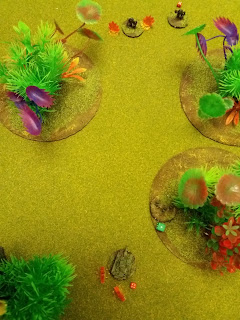 Unfortunately for the mechs the UCS armour begin to advance to blast away at them with their pulse cannon. Fire is exchanged but the Collective mechs definitely get the worst of the interaction. 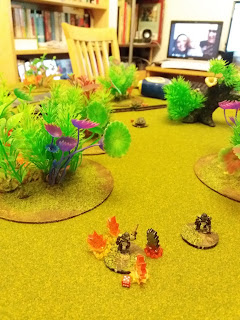 In fact, with one of the mechs blowing apart into a cloud of gases, scrap and body parts the lead mech begins a furious radio exchange to decide whether they should carry on their flanking maneuver. 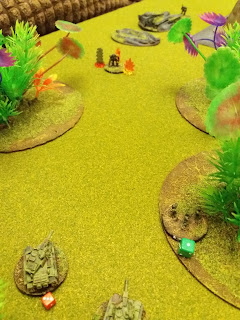 Before a decision can even be made Commander Rowner advances and earns his crew another kill ring around their cannon. Today is turning out to be a walk in the park for the UCS armour. Command will be pleased. 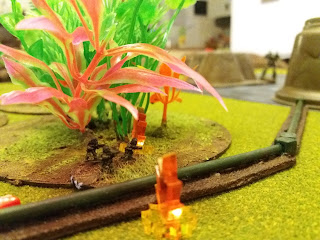 Squad IV take cover in the jungle foliage as the squad garrisoned in the building open fire. They suffer some casualties, but are still combat effective. 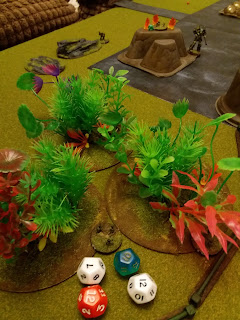 Second squad covers their buddies, in the hope to provide a distraction. Well they manage, and absolutely obliterate the Collective infantry in the building. 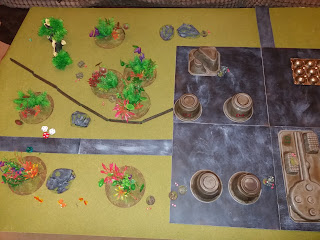 The Collective are worried and need to rethink their game plan. The commander sends out orders to fight to the glorious death and delay the UCS long enough to allow Collective reinforcements to arrive. 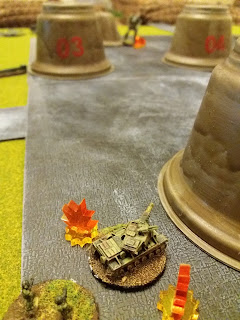 UCS armour on the right flank exchanges fire with the beast mech. 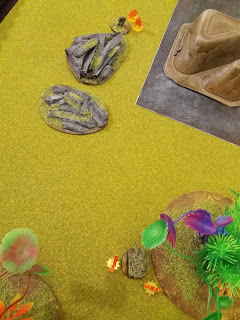 The last remaining flanking mech prepares for a valiant last stand, planning to take as many of the infidel with him as possible. 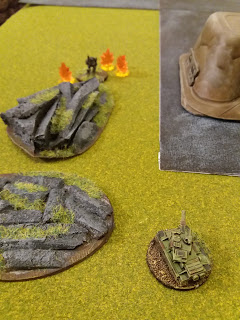 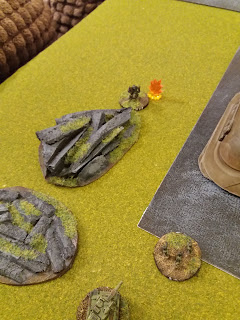 Intense firefighting occurs, but he holds fast, bogging down the left flank of the UCS forces. 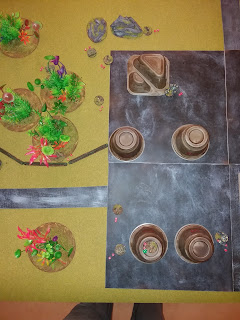 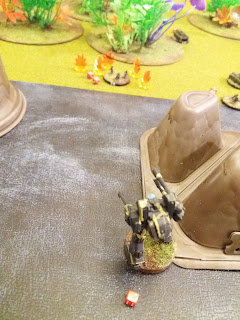 Seizing the initiative, the beast opens fire on the advancing infantry, almost entirely destroying them. The few survivors hug the ground and hope for a chance to retaliate...or just survive the battle. 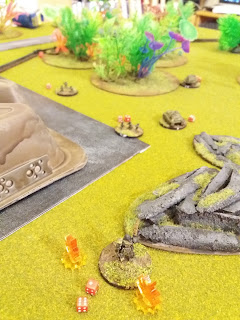 Praising God the driver of the last mech dies under a hail of glorious fire. In his final thoughts he hopes to be met in the afterlife by his ancestors, praising his glorious death defending the faith. 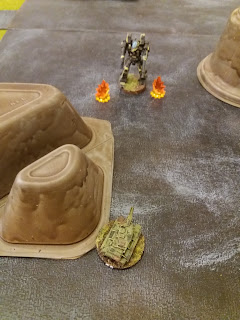 With the flanking mech destroyed the armour can advance up and attempt to destroy the beast. Damage is done to the leg servos, but nothing too devastating. 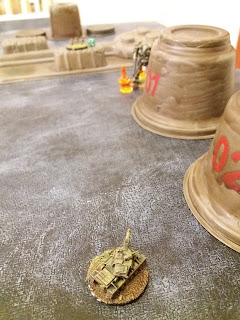 Armour advances up the right to lay the command mech under fire. Damage is done, but not much. These mechs are hard to take down! 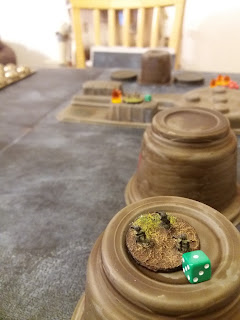 Dug in infantry exchange fire. Collective troops taking the worst of the fire and break, fleeing the battlefield. 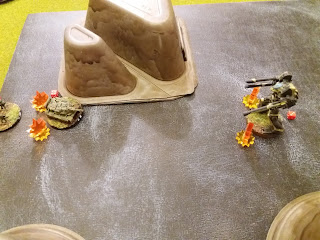 The last stand of the beast as he is slowly whittled down, giving as good as he gets, but not quite managing to destroy anything. 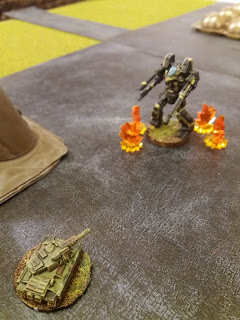 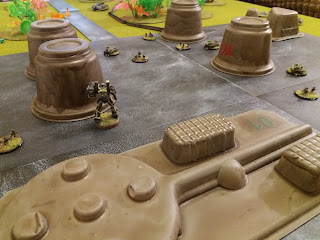 Surrounded, the commander weighs his options. Today is not the day to meet his ancestors. Maybe he can be allowed to live on a UCS backwater planet, and keep out of the way? His ancestors will understand...he hopes.

The UCS set about securing the research facility and investigating what happened. Why the distress call? Where are the research staff, or even HySys security forces?
Posted by James at 9:10 pm