Horizon Wars with a real person.

Tonight I played my first game of Horizon Wars with a real person (who found me via the blog!). We agreed to play a small game to test the rules some more and went with a 3x2 urban setting with the objective for the attacker to hold the large complex just below the centre. He had to hold it for an entire turn after the turn in which he occupied it.

I didn't take many photos because I didn't want to hold up play and as we were just messing around a bit. 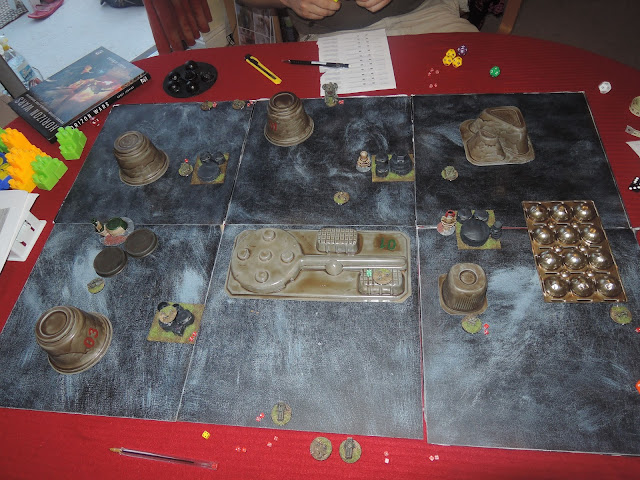 The game went pretty smoothly and we had the basic movement, attack and defence mechanics under our belts very quickly. There was one point I charged infantry who were inside the building with another unit of infantry. I wasn't sure what the rules are about charging a unit that is in a building? I couldn't find anything specific about it in the rules. We also had a situation where an F-0 unit was charging...not sure if that was allowed. Will put these on the rules thread over at The Wargames Website. We also had a tank charge at infantry who were inside and just justified it as the tank shooting through openings.

I can see the benefits of playing on a larger table, because we got into combat quite quickly, and it was just so easy to apply all damage to movement. By the end, at least one of the heavy tanks was just a bunker. The shooting mechanics are great though, and it feels like once you close the range all of a sudden you start dealing large amounts of damage.
I look forward to playing again, maybe not in an urban setting this time. I intend to do some more terrain building over the coming days. I want some generic vegetation, and I will also be building forest CD features.
Posted by James at 10:51 pm