I managed to get to Colours 2016 today. This is my first show in a few years, I think Salute 2014 was my last. I went armed with a modest budget and with two goals in mind. I was either going to pick up some spacecraft to begin my dabble into space fleet combat, or I was going to get a couple of starting forces for 6mm World War 2, and a handful of buildings for them to fight over.

After walking around a couple of times, I decided to go with the WW2 in 6mm. I have read a few battle reports of A Sergeant's War, and feel like I could even finally dust off my unused copy of Battlegroup: Overlord. Which miniatures to use, however? I knew that Heroics and Ros were there, as was Baccus 6mm. Well, I couldn't see any WW2 at Baccus, so moved on, spent ages looking at the catalog at H&R, then took away an order form and sat down to munch on my sandwich. I had arrived later than planned due to traffic on the M3 and the rain.

I ordered some US and Panzergrenadiers, some support weapon packs and some vehicles and AT guns. The total came to £17.20, which ain't too shabby for getting two opposing forces. Upon reflection, I probably could have even skipped the £5 I spent on the support weapons, because they might not be totally necessary. Anyhow, the gentleman at H&R said to come back in half an hour, so I wondered around. GZG didn't bring any 6mm, but had some lovely spaceships. Brigade Models was there with some stunning painted spacecraft. I knew I had to keep it cheap though, so removed myself from temptation and went over for a chat at Baccus. Turns out they just didn't have the big packets ready for WW2. He did have some painted figures on display, and let me tell you they were gorgeous. I was sorely tempted to run over to H&R and cancel my order but one thing stopped me: Baccus has no vehicles for sale YET. He had a stunning Sherman prototype. I will, without a shadow of a doubt be purchasing some forces from Baccus as my next purchase (probably with Christmas money). I reckon I will get my Brits from them.

Anyhow, here is my stash: 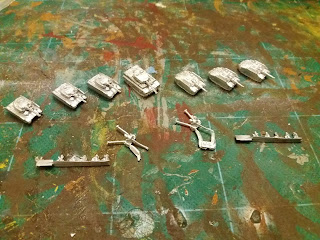 I intend to game Normandy onwards on the western front. As such I thought some Panzer IVHs would be useful, as would some StuG IIIs. Inspired by the film Fury, and just generally wanting a monster, I got a Tiger I. Some PaK 40s were also necessary. 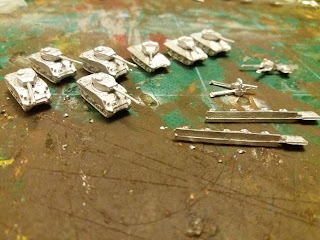 For the US forces I decided that I would need some M10s, some 57mm AT guns and some Shermans. The plan was to get M4A3 Shermans and one Sherman 76, but they all appear to be Sherman 76s. I am not complaining...just means I will need to make some more purchases as time goes on. 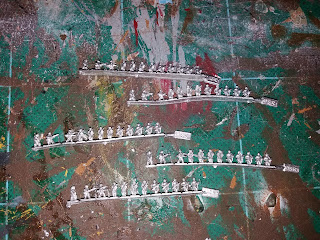 These are the US infantry. I paid £2.50 for 48 infantry, but have ended up with just over 50. They look good, there is some flash in the legs, but they are fine. I would have liked some more firing poses, but I am not too fussy. 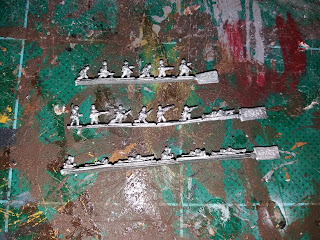 The gentleman threw in a few extra strips of Panzergrenadiers, so I have ended up with something like 70 infantry. They are gorgeous and have plenty of lovely poses. I am very, very pleased with these. 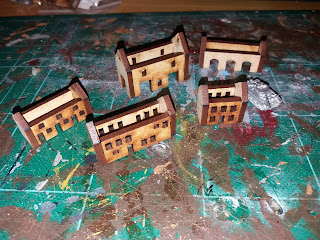 I needed some things to fight over, I can make forest areas, I have hedges and can scale some down, but I have no buildings. 3 packets of buildings for £10 over at Rapier Miniatures was a no brainer. I bought some barns and two sets of farm buildings. They will be good for either having a farm, or making a little village to fight over. I am pleased with them, although they look tiny. They are, however, probably accurate, and if I were to ignore bases, there is plenty of room to move around in inside.


I am glad I went. I felt a little out of place there for some reason, but came away with a new venture for my hobby. I have plenty of Sci Fi miniatures, and have campaigns going on with them, but I like the idea of a march on Berlin. Anyhow, with that I do most of my gaming solo, and went there alone, I just felt like I was very alone. It was strange. I felt like I couldn't watch any games, because who wants someone watching? And as much as I wanted to talk to Tony Francis of Brigade Models, I knew if I did, I would end up blowing my budget on Neo-Soviets.
Posted by James at 11:14 pm