Holding the Line - a 6mm AAR

Tonight I took the rules A Sergeant's War for another spin, mainly to test out a few things, namely AT fire and HE fire.
The Scenario: A few squads of US infantry are holding a defensive line near a farm while an under-strength German platoon probes to test the viability of a larger counterattack in this area. 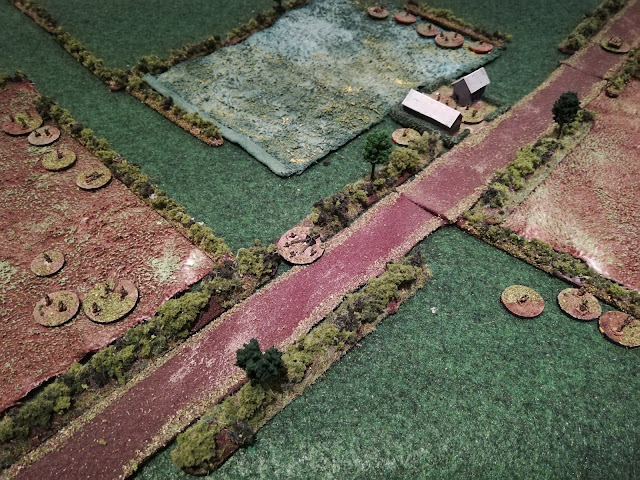 The US defensive line. The 57mm gun covering the road with a BAR team holding the farm buildings. Their plan would be to fall back to the bocage lines held by their comrades should an attack of any note come. The right flank is being held by another BAR team while the rear is held by the 30 cal and the rifle squads. The Germans would be advancing in a general line. 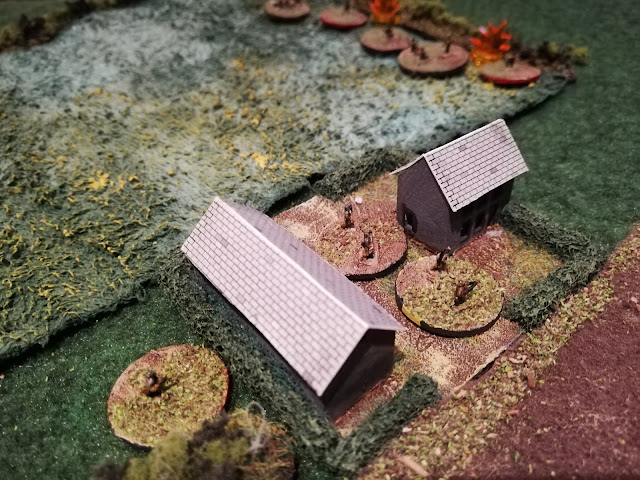 Jumping through the bocage a German rifle squad attracts some ineffective reactive fire from the BAR squad in the farm complex. Annoyingly this revealed their presence. Something I semi-ignored last game is spotting. But shooting basically gives the game away and by the opponent's next turn any enemy unit can shoot at you if they can get LOS. I think. 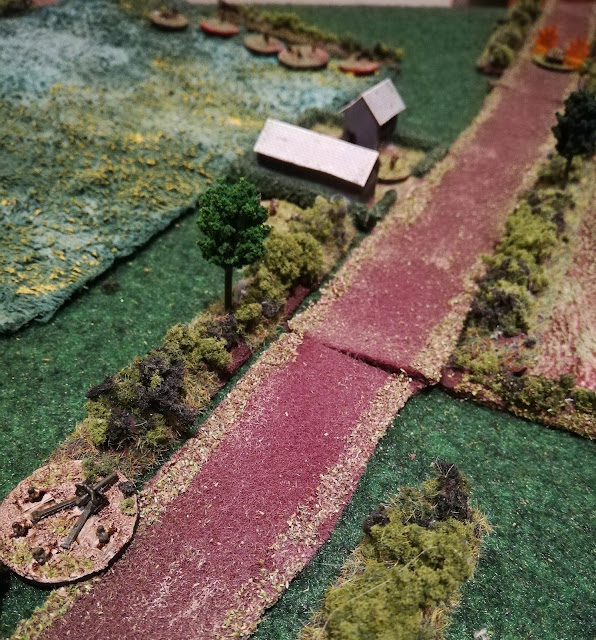 Seeing a StuG III cautiously advance up the road the AT gun crew decide to engage. As the shot screams off it is clear it hits true as the StuG shudders... 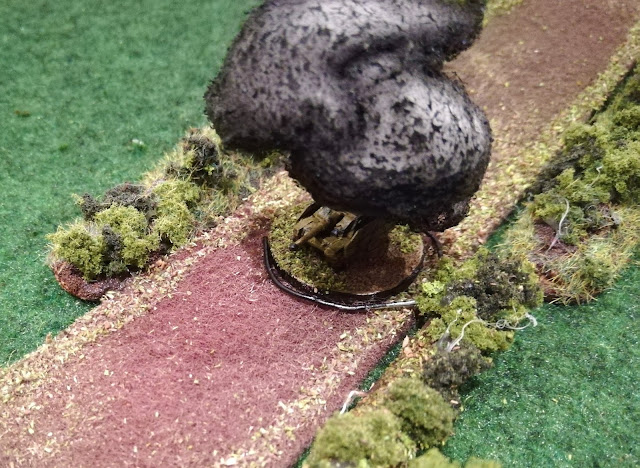 ...and begins to billow with smoke as rounds cook off inside. No crew make it out. I was almost disappointed that the first AT shot I have ever made with these rules hit and resulted in simple destruction. More likely would have been forcing morale checks from the crew. 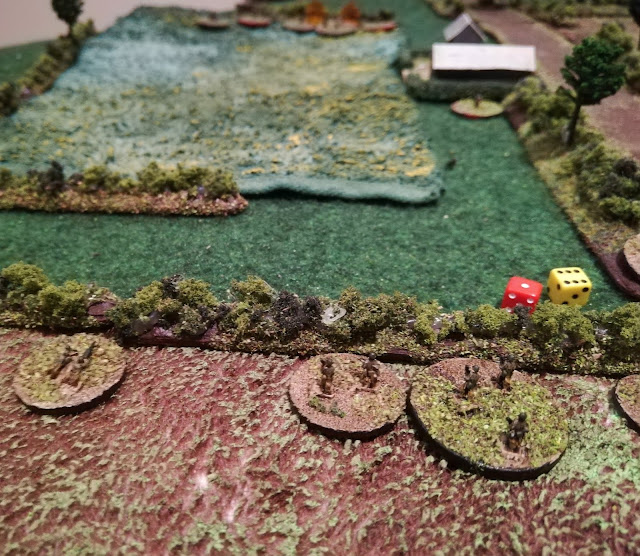 Seeing Germans in the open this rifle squad opens fire. The yellow is the hit die which was successful. The red die is the casualty roll, needing a 1 to cause a casualty, which they managed. 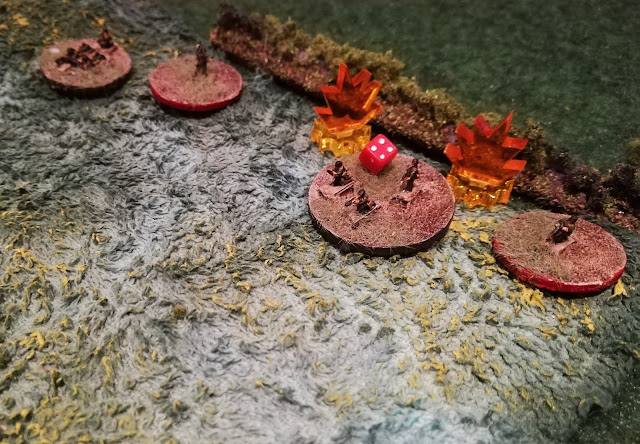 The squad throw themselves to the ground, check on their dead comrade and wait for a chance to return fire. One hit and one casualty mean this squad performs 2 morale checks. Actually it is three because they are caught in the open. Their morale value is 4 so they need to roll 4+ on each die to avoid getting pinned. They actually failed two morale rolls, but the leader allowed them to re-roll one of them, which was a success. This squad cannot move, but can fire with a heavy penalty. However, before the Germans start moving and shooting, all German units who have pin markers can try and rally to remove one pin each. 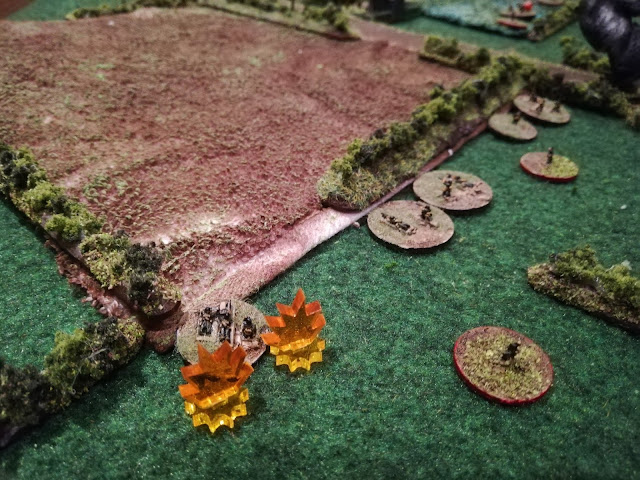 On the German left flank the MG34 team comes under fire from the defending BAR team, but the presence of their NCO helps steel them against getting pinned. 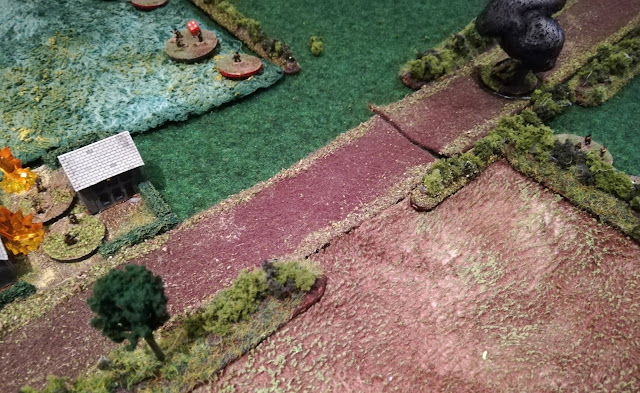 Advancing up into the corner of the bocage a German rifle squad fires on the BAR team holding the farm house. Again, the presence of their NCO encourages them. I had many more successful Leaders leading this game, although I think there were a couple of times when they actually got killed and I forgot. 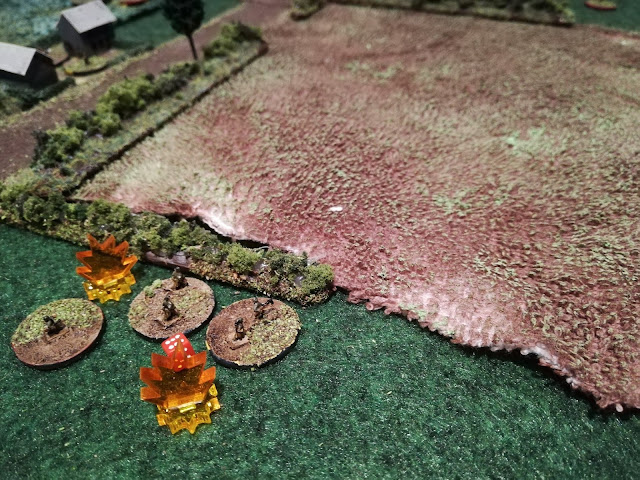 At time goes on and it appears to be turning into a stalemate the BAR team on the US right flank looks like it might break, allowing the Germans to roll up the flank. 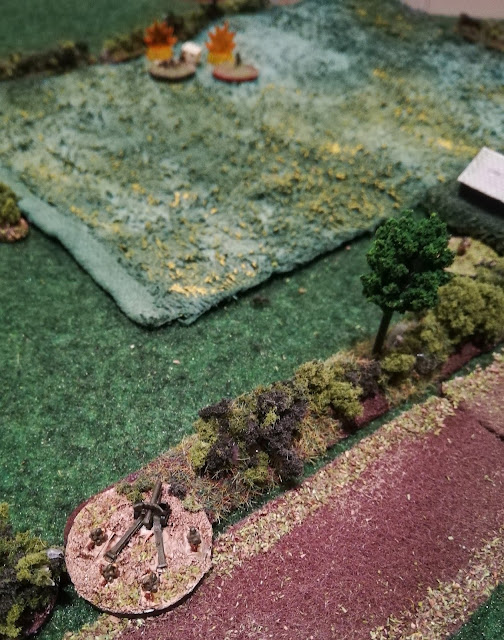 Taking a chance the 57mm gun opens fire with HE against the MG team in the field to devastating effect. Under such fire and being in the open, not even the presence of their grizzled NCO can stop them breaking and seeking cover behind some bocage. A 57mm gun is a light HE gun, meaning it has FP2, so I roll 2 dice, needing 3+ to hit in this case. The hits plus being caught in the open led to 3 morale tests, all of which failed, and the NCO re-roll achieved nothing. 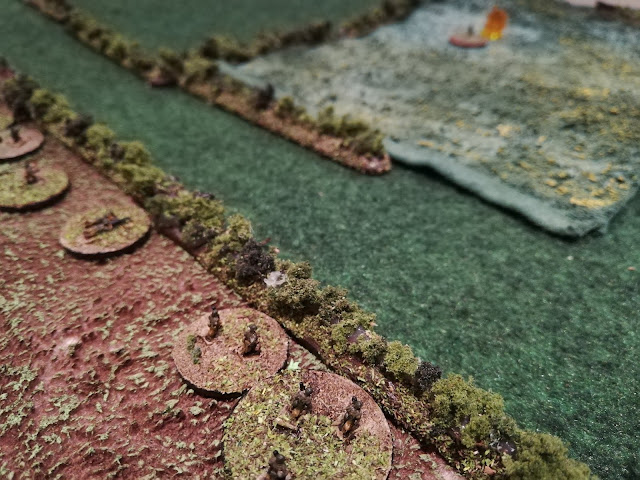 Rifle fire sends the NCO scurrying off for cover also. I may have misunderstood the rules, but it doesn't seem you can kill leaders. They can only die while leading? I may be totally way off though. 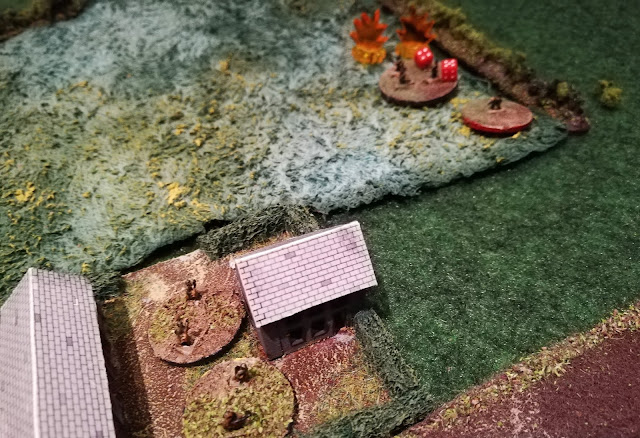 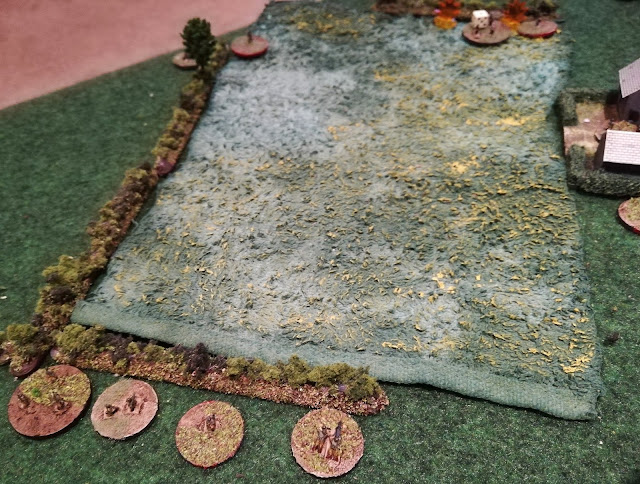 That is until the 30 cal team opens up, breaking them, forcing them to retreat behind the bocage and off the battlefield. I read more about broken units. They keep retreating unless there are no enemy within LOS. So they kept retreating. 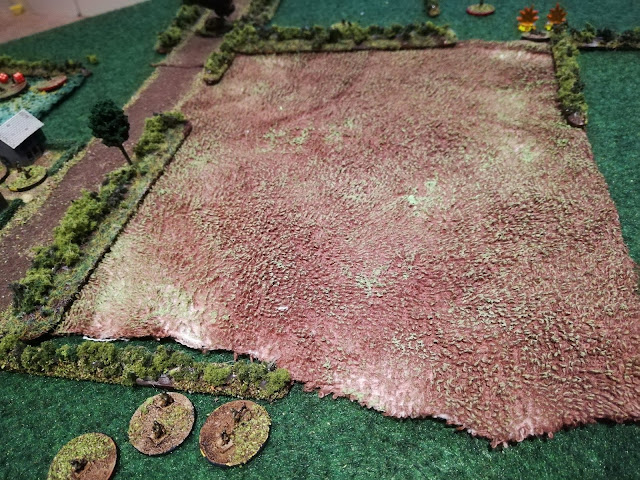 On the US right flank the MG34 team comes under more fire. 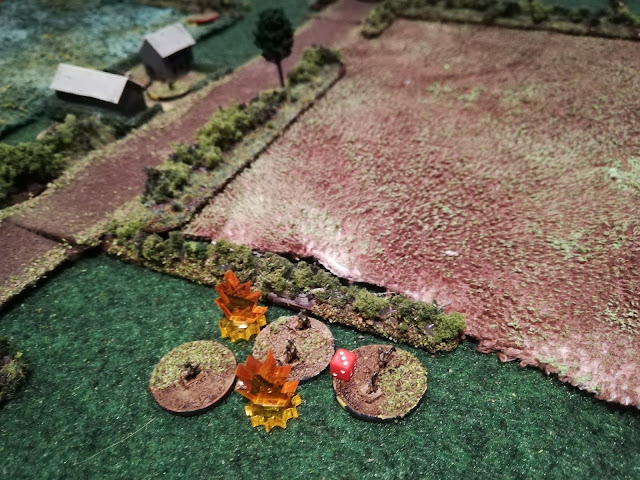 The BAR team on the right flank gets pinned again, but they keep rallying. 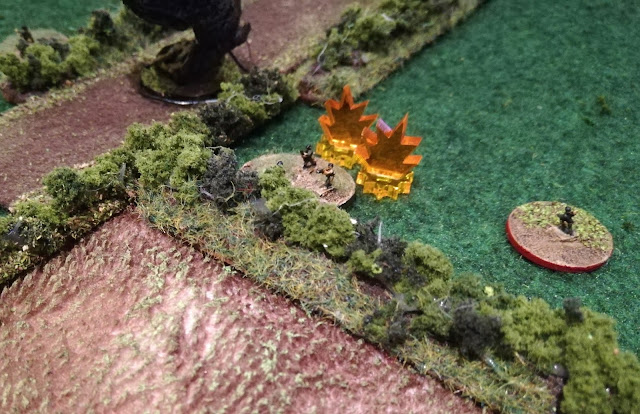 The German squad firing up the road take some HE fire from the 57mm gun. They rally though and pass the morale tests. 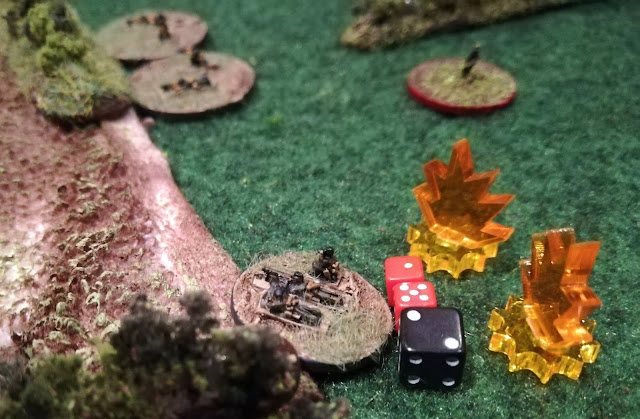 The MG34 team takes two casualties and becomes heavily pinned. They won't be doing much for a while. The unit is at less than 50% strength so the FP is halved. With 2 pins they cannot move or fire, but don't need to retreat. 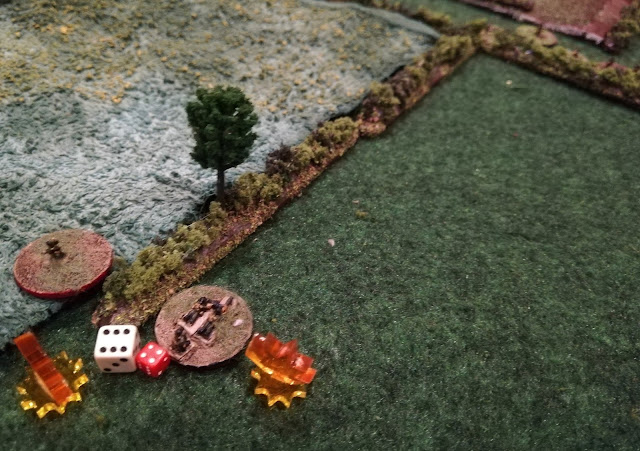 After rallying some the MG34 team on the other side of the fight breaks again and retreats away. At this point the remaining German NCOs begin withdrawing their men. This may not be the right place to poke through the US defenses.

This wasn't the best game in the world. I mainly wanted to experiment with AT and HE fire. I was thinking about having wave after wave of Germans coming, but decided it would get boring so kept to the first wave. The next game may be larger. I anxiously await my Heroics and Ros order with some Shermans and Stuarts. I want some actual allied armour.