Having set aside my 20mm WWII miniatures back towards the autumn of 2015, I had the itch again to play  WWII still. My aversion to basing multiple troops on one base has been overcome thanks to Horizon Wars, so I was looking around for rules to play WWII in.

I own Bolt Action, a couple of the Battlegroup books and Crossfire, have had some of these for a very long time. Crossfire and Battlegroup have never seen the table. Bolt Action has had two outings, once at my only appearance at the Winchester Wessex Gaming group (I think that is the name), where I used someone's 28mm figures. The other was against myself on my parents' dining room table, in 20mm. I enjoyed them, but have not played since. The only other WWII games I have had were Flying Lead, which have the benefit of being playable on a small table with only a handful of figures, which I enjoyed.

However, looking for other rules, I came across A Sergeant's War, looked at some AARs (played in 6mm) and decided to go for it. I then bought some Heroics and Ros miniatures at Colours in 2016, which have sat mostly unpainted in a box since. Being able to say I have two squads-ish of US infantry and two squads-ish of German infantry makes me extremely happy, and has fired my resolve to get back into WWII.

I have based them in a 3,2,1 format to help keep casualties counted without the need for tokens. I may paint the squad leaders' base rims a different colour to help them stand out more. The normal infantry will have black rims. 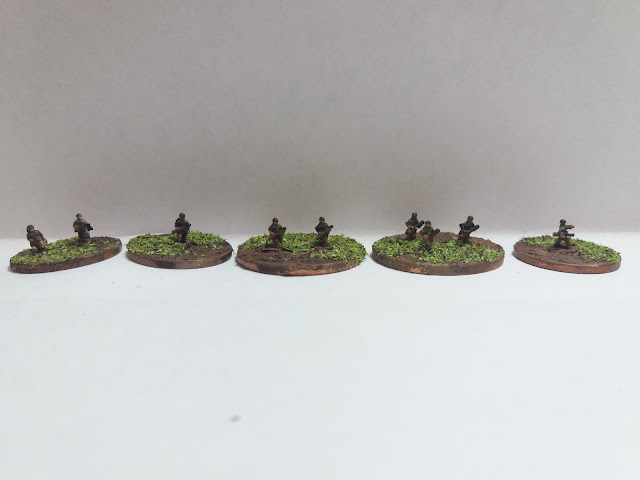 US Infantry squad with a BAR team. 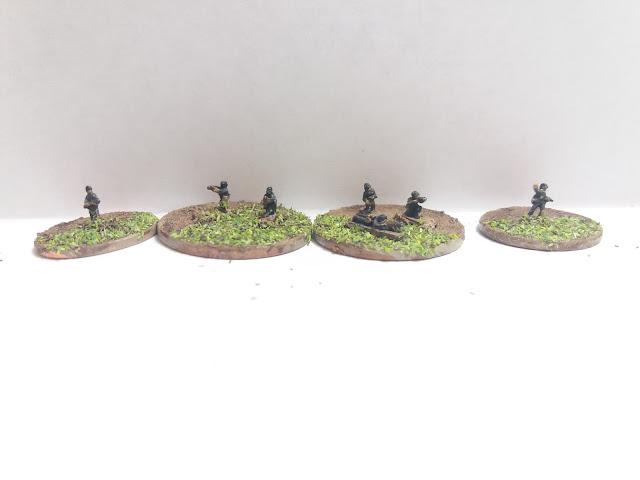 Up next to be based: a bunch of US infantry as I painted loads on the "sprue" (the term escapes me right now) and a few more Germans (mostly MG teams).