A few points before the AAR: this was the largest battle of Horizon Wars I have played in both army presence and also table (floor) size.


The cold war had lasted 50 years. The first war for independence had taken the United Commonwealth of Systems (UCS) by surprise, and the political fallout had been disastrous. There had been so much factional infighting and other small scale rebellions that the decision had been made to let the Collective of Independent Systems exist and just insulate the rest of the Commonwealth from the failure to defeat the Collective rebellion. Since then the UCS had been unable to penetrate the Collective and was unaware of what was going on there. All that could be done was fortify bordering system, and hope for the best.

The town of Wessington Springs on the planet Satomi. It sprung up on a natural hot, underwater spring and became a natural, renewable power supply town. Now, however, it is the chosen point for the reopening of hostilities for the Collective of Independent Systems as they try to move UCS control out of this particular solar system.

UCS forces rush to defend the town as Collective strike elements approach from the east. 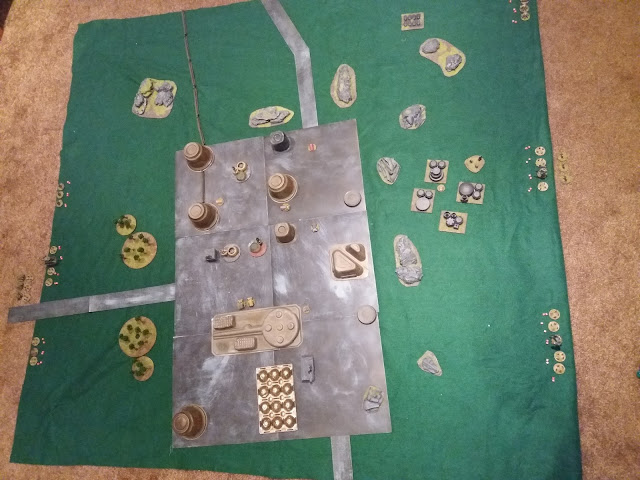 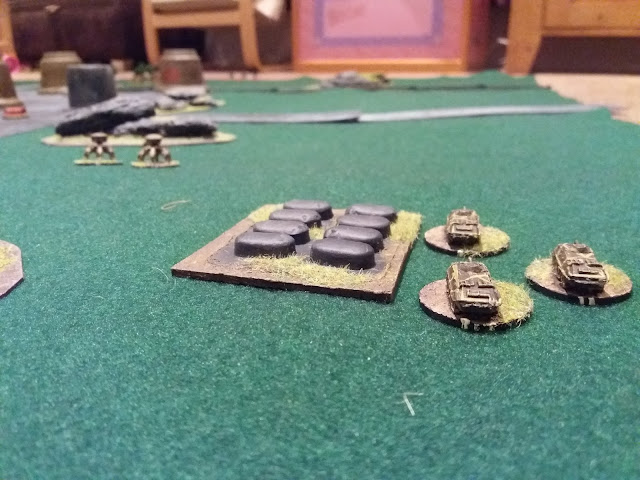 Collective Light cavalry and strike mechs speed along the north flank in an effort to circle around Wessington Springs. 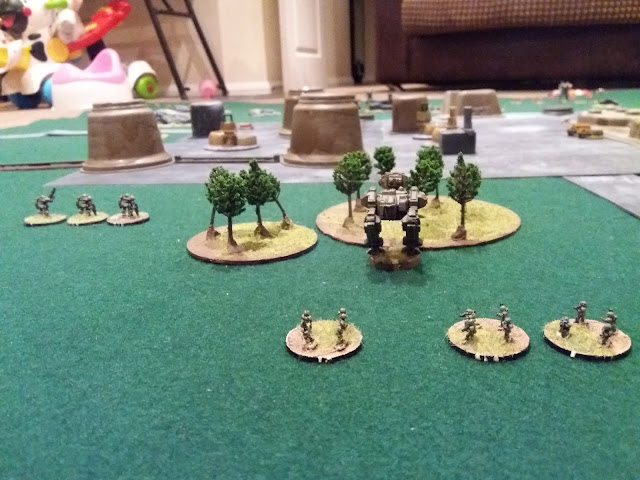 UCS infantry and command mech advance behind the woods. Experimental mechs advance on the north flank. 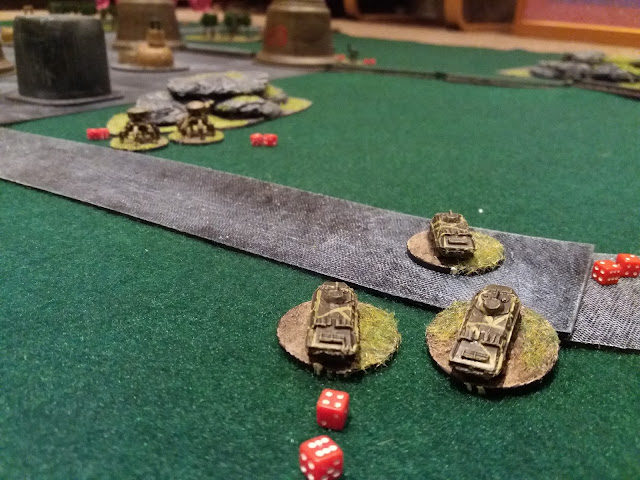 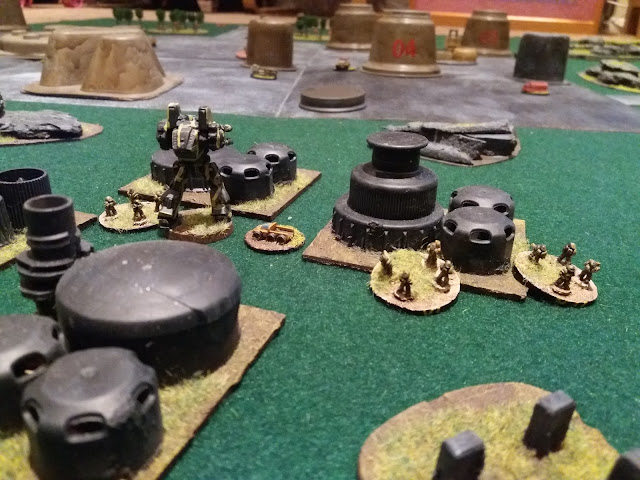 Collective command mech and infantry secure the outskirts of town. 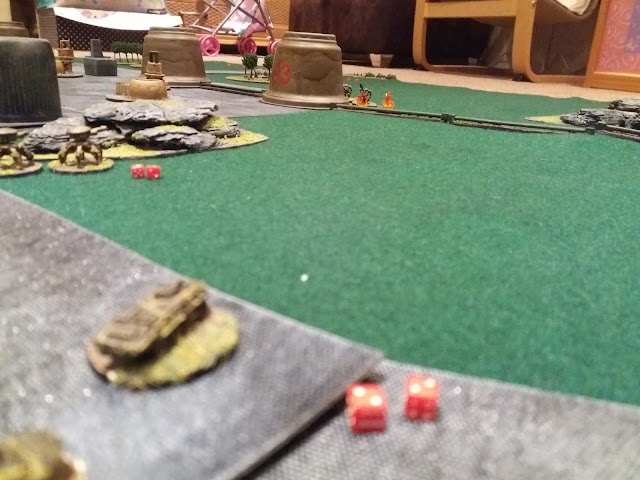 Spotting a mech out in the open, a Collective cavalry officer takes his chances, causing light damage. 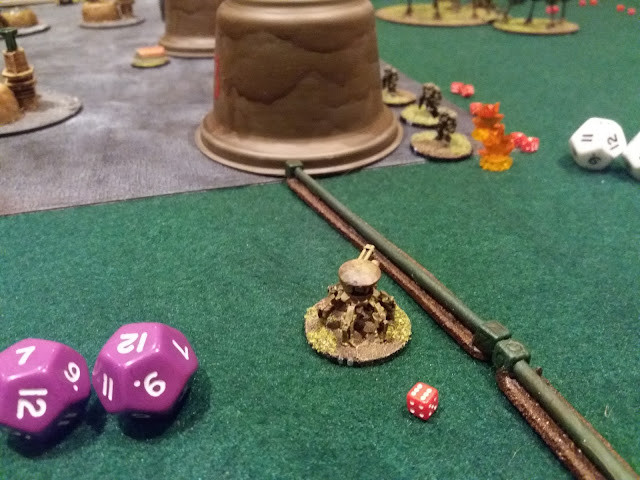 Inspired, a strike mech rushes forward and in a stroke of luck, discovers the gods are with him. The enemy mech is completely obliterated in a hail of armour piercing rounds. It looks like there might be a speedy breakthrough for the Collective. 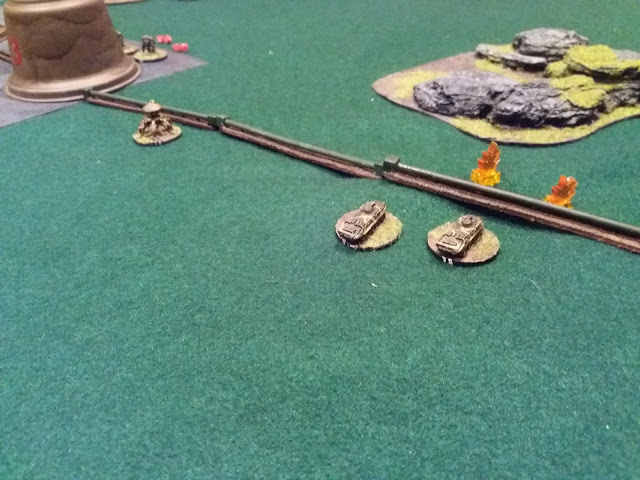 With the threat lessened, the light cavalry blast their way through the pipeline,  it can always be repaired later. 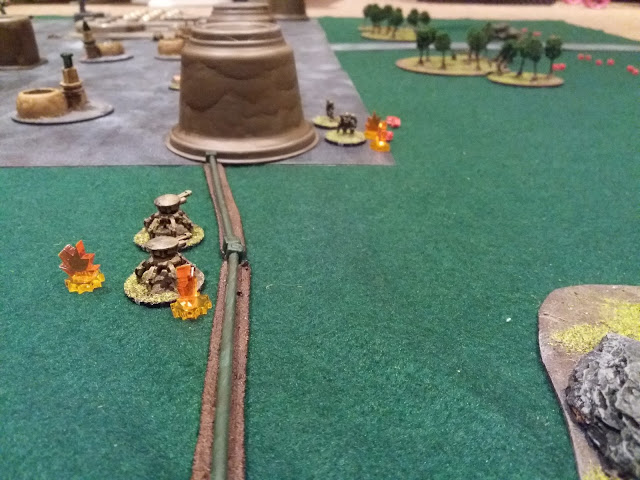 The second strike mech charges into the fray exchanging fire with the remaining UCS mechs. 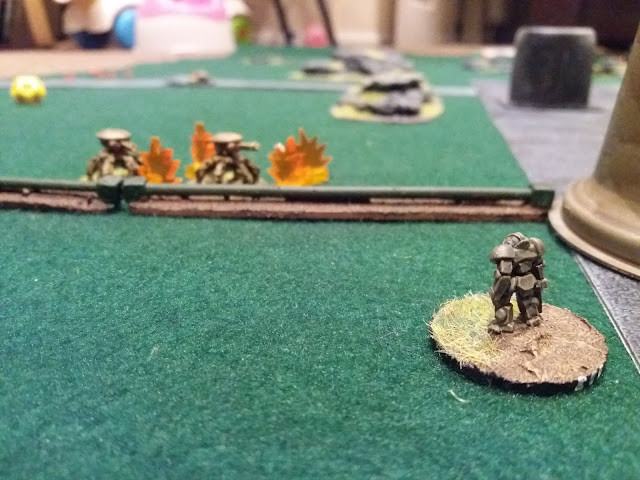 Taking the initiative, the UCS mech surprises the strike mech, destroying it in the process, leaving scrap metal and body parts strewn across the ground. 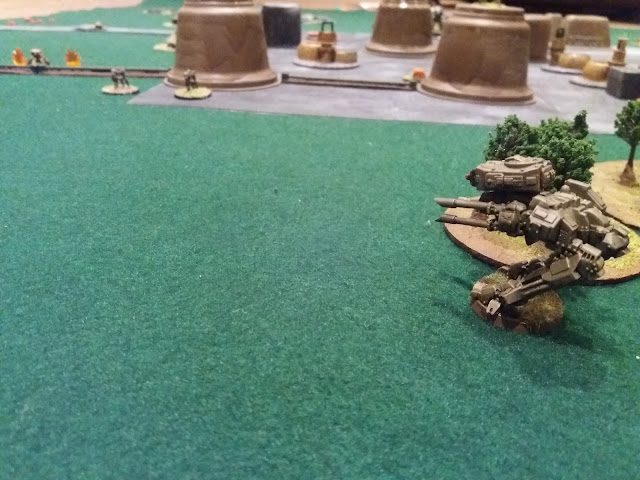 The command mech uses its powerful weapons to inflict more damage. The threatened north flank looks like it may hold. The Collective commander is beginning to worry. The potential breakthrough is looking less and less likely. 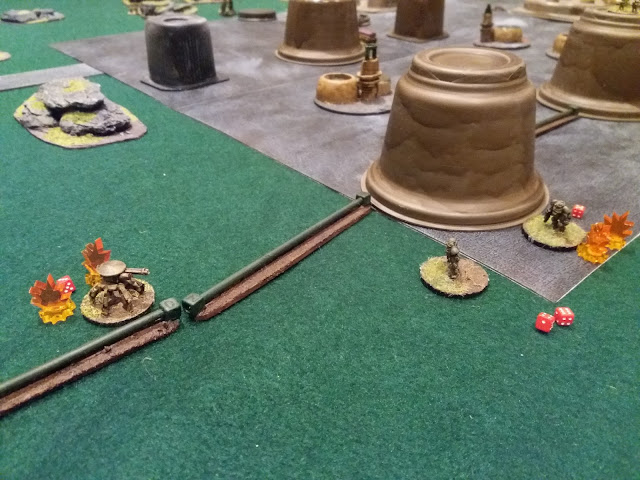 Rallying, one of the damaged UCS mechs engages in a firefight and destroys the remaining strike mech. 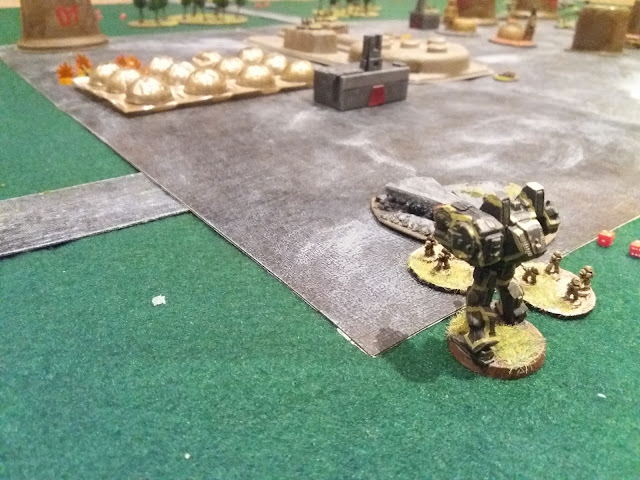 The Collective MLRS mech opens up with a salvo of rockets. Destruction and carnage reigns down on the infantry,  hugging any cover they can find. Enough men survive to fight on, but hey are weakened. 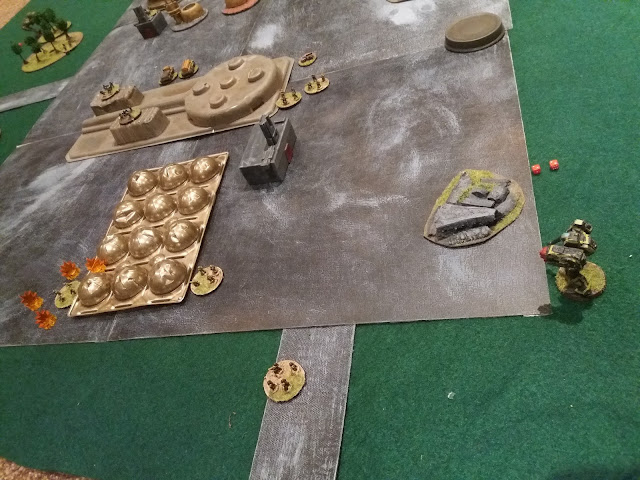 Weakened enough to become combat ineffective under a hail of fire from opposing infantry. Things are looking better for the Collective. 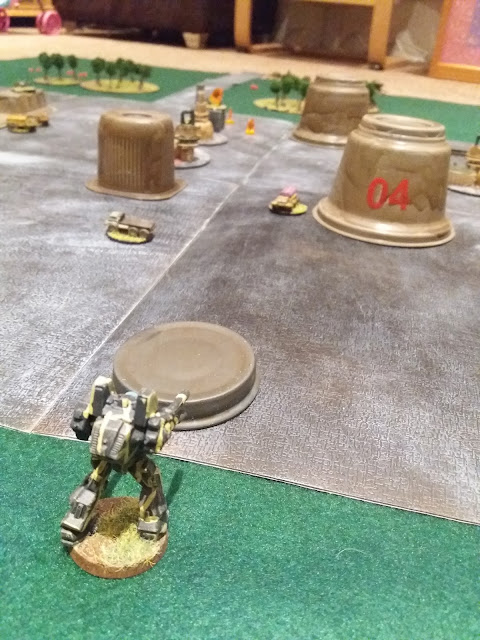 Losing the strike mechs was worrying, but the large mechs in the Collective centre are wiping out infantry units, meaning the UCS commander is having to stretch her forces out. 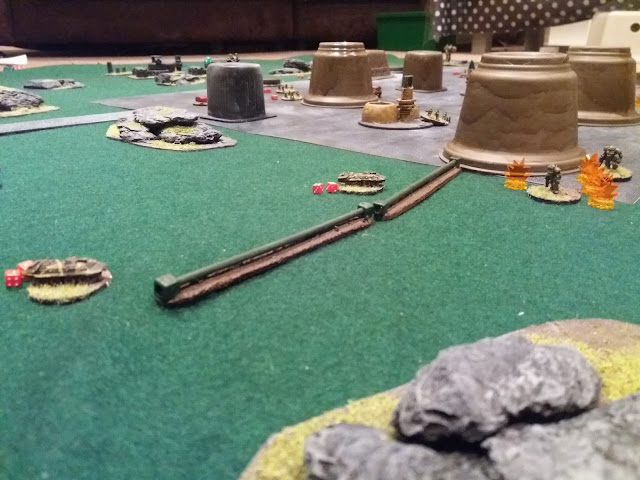 The tactical situation for the UCS continues to deteriorate when light cavalry engages and destroys another mech on the north flank. 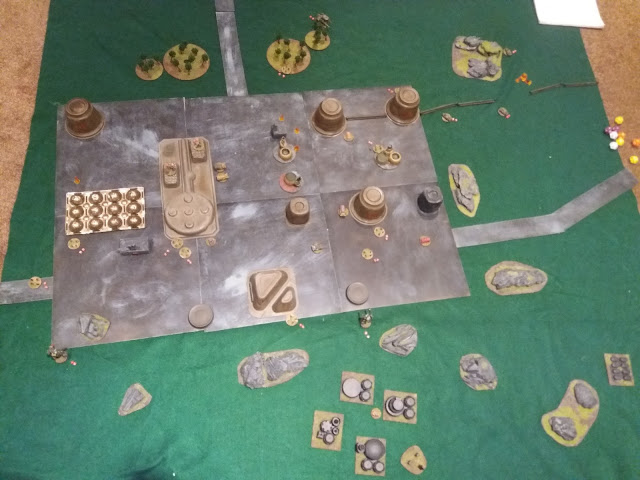 Aerial images show the UCS clinging to the edge of Wessington Springs, while Collective forces continue to encircle the town. Intercepted UCS transmissions indicate problems contacting their reserve elements. The Collective commander is currently feeling no need to call on his. 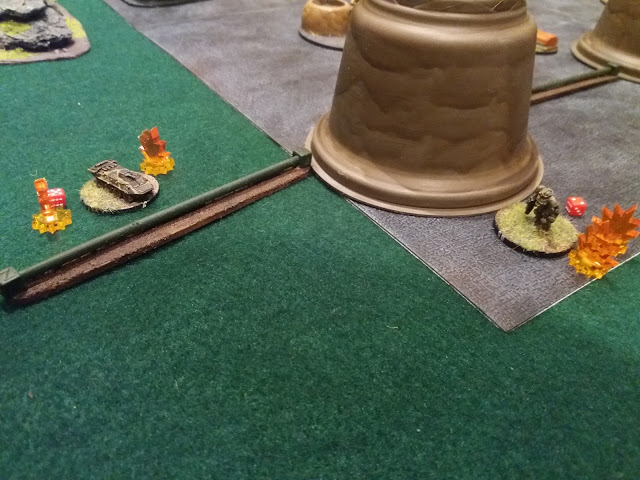 Gaining the initiative again, the UCS sends in their final mech in an attempt to stem the tide on the north flank. This gamble backfires and in the ensuing gun battle the mech is blown apart by a lucky shot to its ammunition storage. 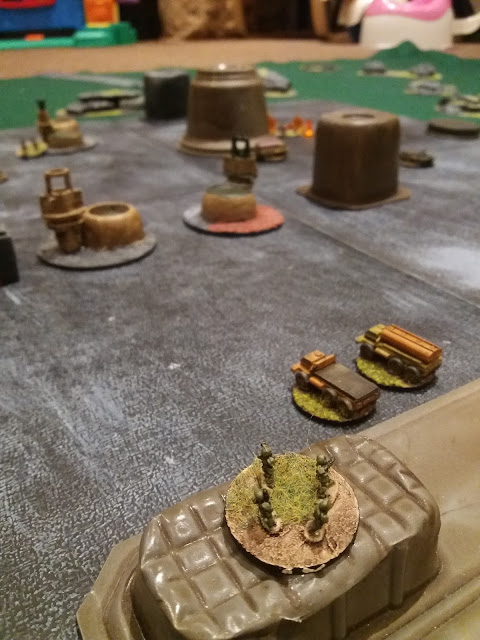 Garrisoned UCS infantry mange to get a bead on some Collective infantry in the open, unleash a hail of fire and completely destroy the unit. If their officer had survived, he would most certainly be facing a courts martial. 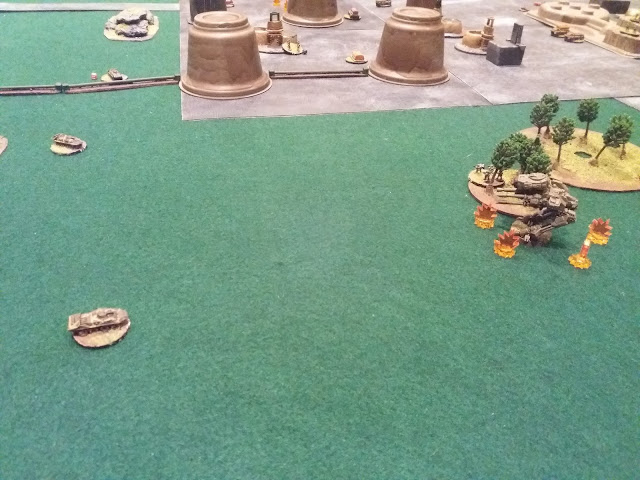 In retaliation the light cavalry close on the UCS command mech, peppering it with fire, blasting off bits and pieces, damaging it. 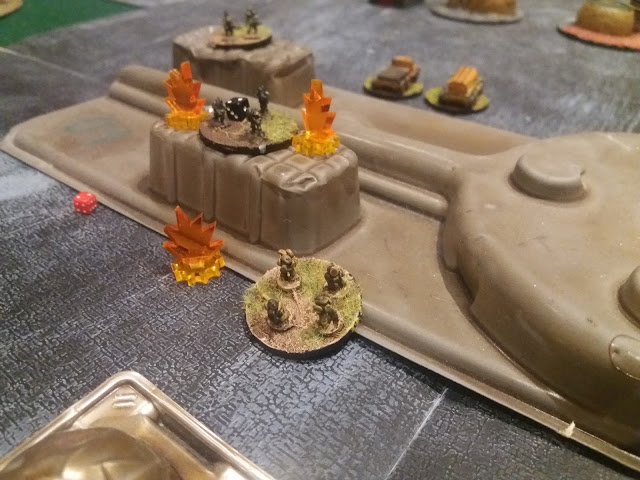 At the same time, Collective stormtroopers assault some UCS infantry who have garrisoned themselves in the power station. In and bloody battle fighting room to room the UCS survivors fall back but are not in a fit state to continue the battle. 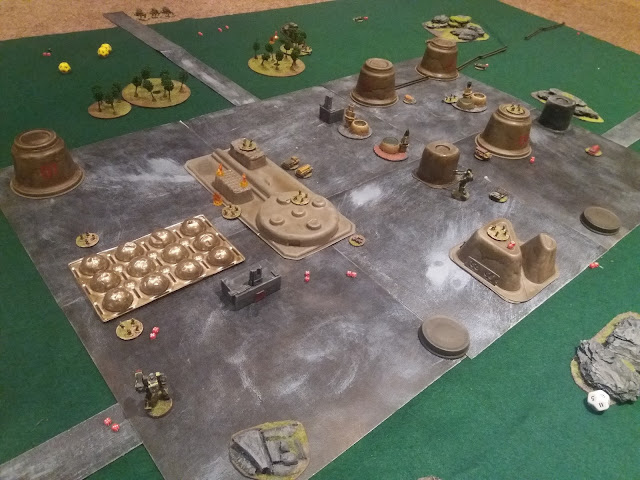 Unable to raise the reserves and with only two combat effective infantry units in Wessington, the UCS commander decides to fall back to fight another day.

The cold war was over. The UCS had underestimated the combat prowess of the rebels, and their ability to field large, conventional ground armies.

Wessington Springs sat in Collective hands, the battle for Satomi was underway, and the second independence war had begun.
Posted by James at 11:28 am