The Defense of New Charon pt. 1.

With reports from various sources being shared about some kind of extra planetary landings, a small detachment of the New Charon Militia (NCM) is sent to investigate. Scans show heat signatures moving towards a small enclave out in the Western Reaches. Prepared for any eventuality, the NCM force is under orders to report back before engaging. 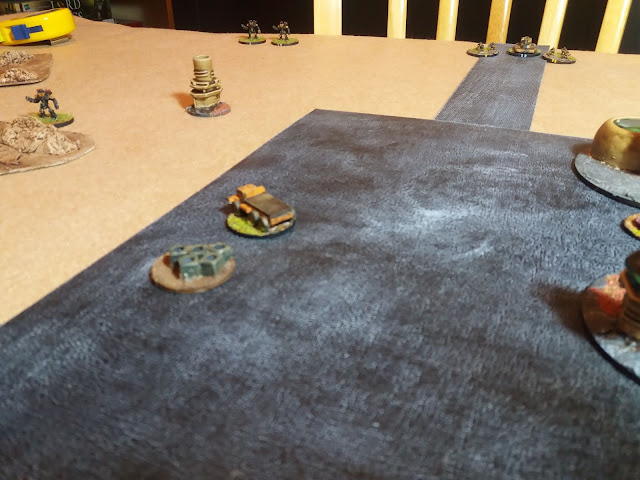 Armoured walkers and what appears to be a tank supported by infantry is spotted on the outskirts of the enclave. Reports are sent back to HQ, and the ROE is advanced from investigate to free fire. Whoever these people are, they are clearly not here on official business and there have been no military training exercises agreed by any of the local militias or government forces. 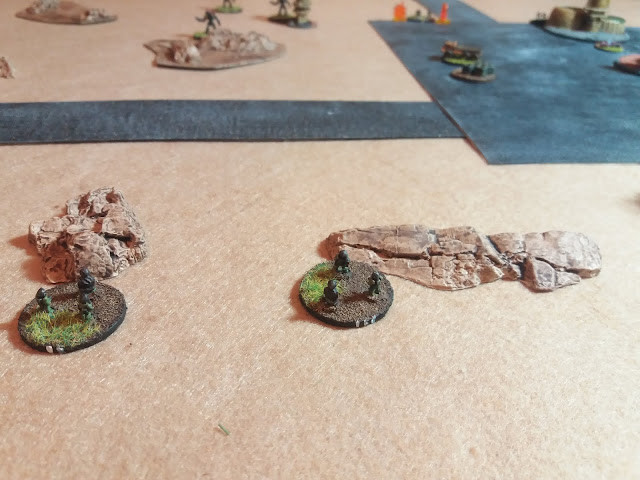 With the updated ROE two units of the NCM advance up to some rocky outrcrops and open fire on advancing infantry forcing them to scatter while taking casualties. 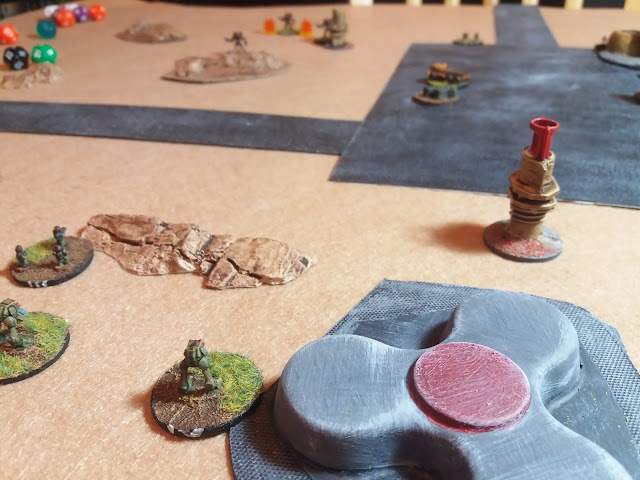 The Close Support Missile Platforms (CSMPs) advance behind the infantry laying down rocket fire, damaging an unidentified walker. These single man mechs are outdated but still pack a punch. 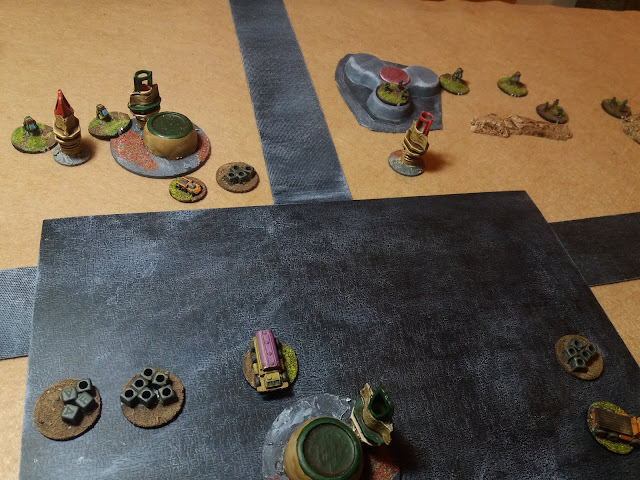 Menwhile the two remaining CSMPs advance on the right flank, while an infantry unit garrisons an outlying water storage plant. 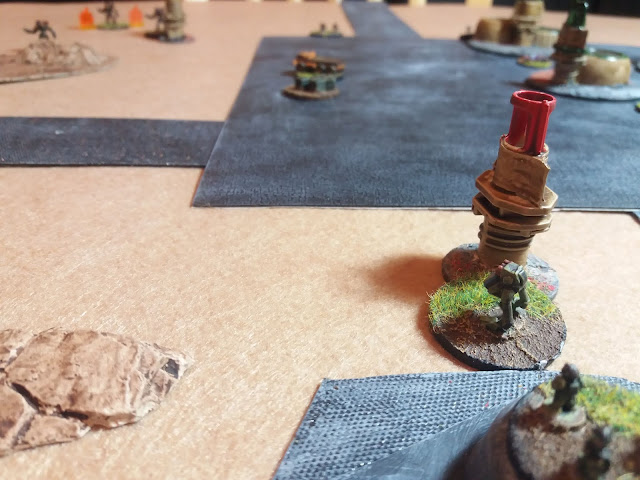 Seizing the initiative again one of the CSMPs delivers more damaging rocket fire, shaking the pilot of the opposing walker. 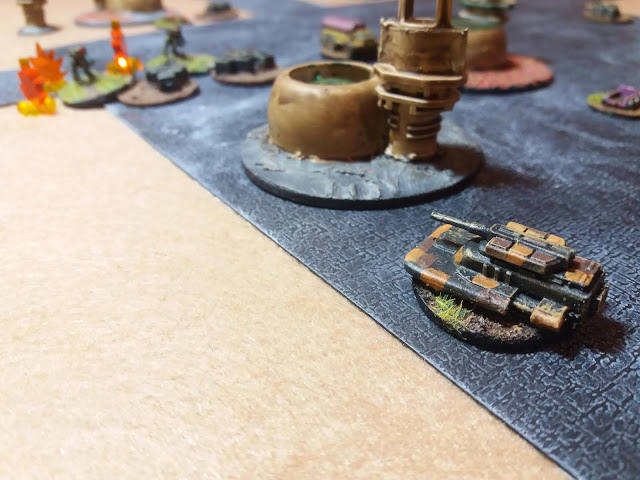 In response to advances on the NCM right flank, the unknown tank advances and unleashes withering shell fire, causing severe damage to one of the defending CSMPs. 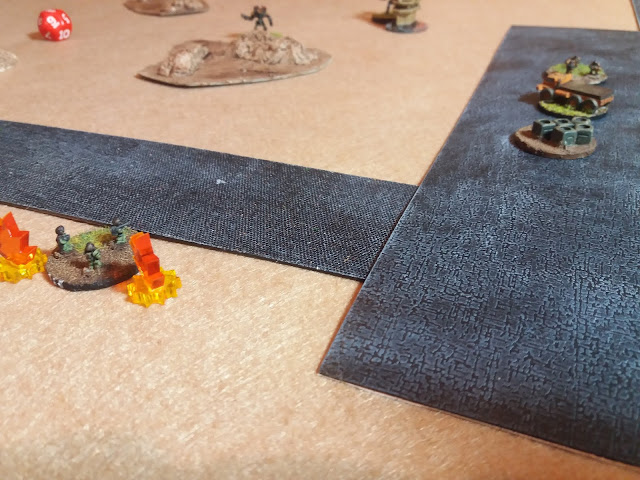 The strange armoured infantry advance up the centre of the enclave, throwing lead at the NCM infantry dug in along the roadside. Casualties begin to mount. 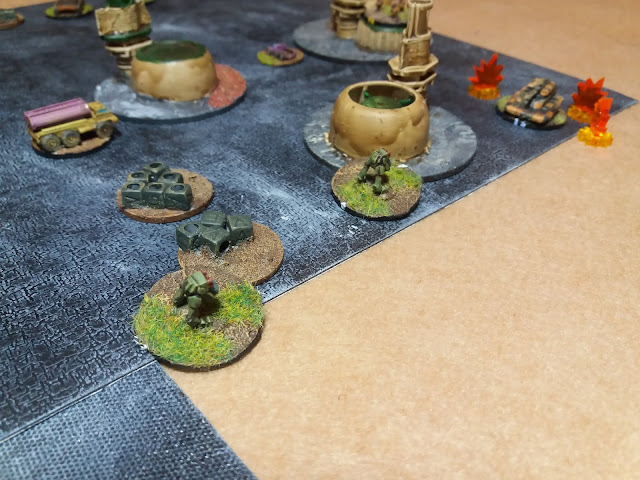 To avoid getting bogged down the CSMPs charge the enemy tank, causing severe damage with their rockets. However, it keeps fighting on. 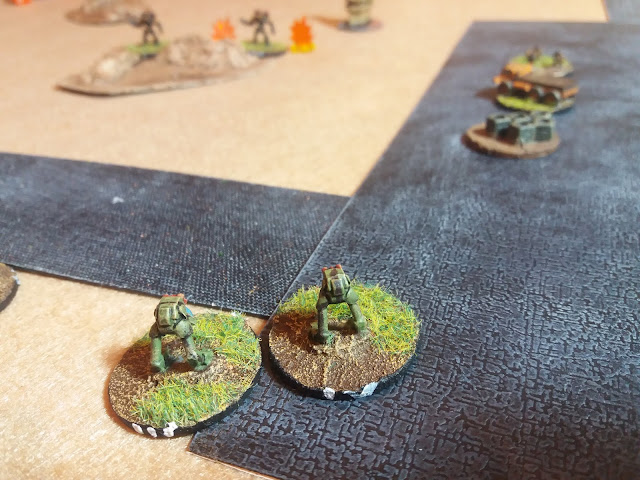 In the centre the other two CSMPs unleash more rocket fire, utterly destroying one of the enemy walkers. 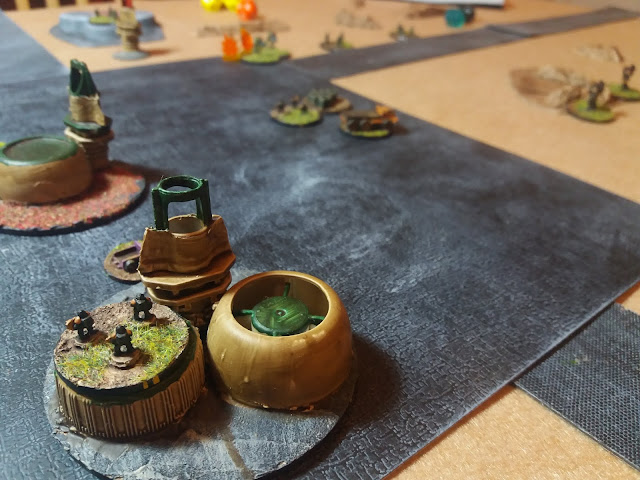 As a response the mysterious invaders open fire with the infantry who are garrisoning the enclave central hub and the surviving walkers. One CSMP is destroyed. 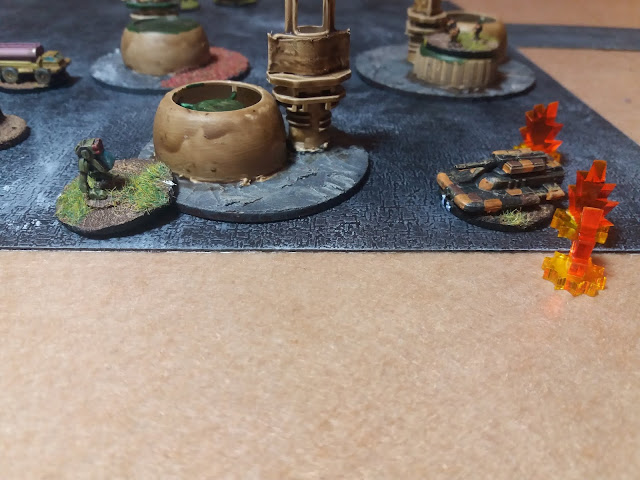 As if to avenge the death of his comrade, this New Charon CSMP pilot opens fire yet again on the enemy tank, causing a catastrophic failure of the ammunition storage system. With rounds cooking off inside, the crew attempt to abandon their tank and run for their lives. 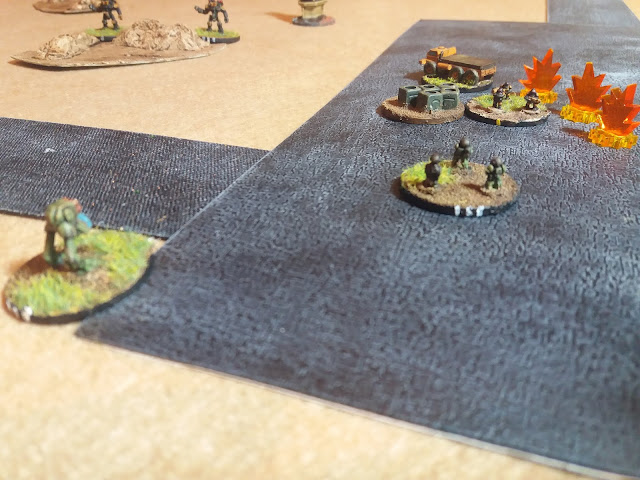 Inspired, New Charon Militia infantry advance, and with the support of the missiles from the CSMP they destroy the enemy infantry, killing them to a man. 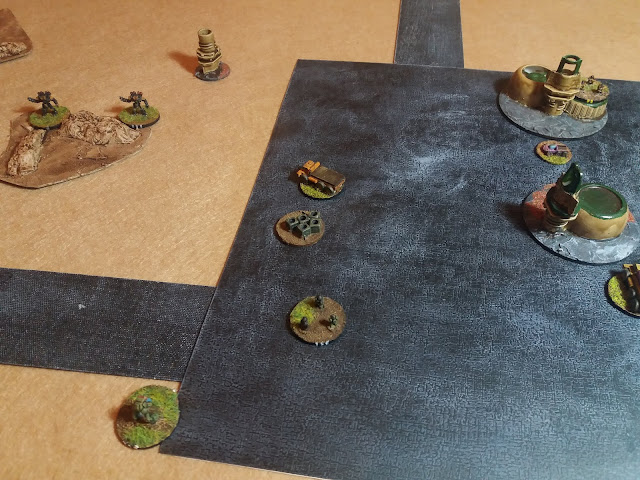 With their heavy armoured support gone, and having a large hole in their centre, the invaders call it a day and make a hasty retreat while under fire from the militia.

Picking through the wreckage, and bodies the NCM find that the men they were fighting all wearing ancient symbols from Old Earth. Their squad leader decides to leave it for the guys with big foreheads to sort out, meanwhile they will carry on to investigate what appears to be the original landing area of these mysterious invaders.

I really liked playing this short  game of Horizon Wars. I will carry this campaign on for a couple more games to just familiarize myself with the rules again, having not played since December. Maybe one day I will continue that campaign, the Battle for Satomi.

Something I tried with this game was using the Battlegroup WW2 rules system of pulling chits when damage is taken. Each chit has a number and if you pull numbers that add up to more than your breaking point, you lose the game. The mysterious invaders pulled a chit each time they lost a unit, and got 4,3,4, exceeding 10 thus ending the game.