Picking up this campaign again. Some time has passed. Sara is not on this mission while Ulrich and Corde have picked up a few other bodies just in case. To make it more solo friendly I have generated a simple AI, inspired by an AAR of Blood in Space over on ...

Here are the stats for the three heroes:

As the team approach within 8 inches of one of the event markers, it is flipped and something appears. 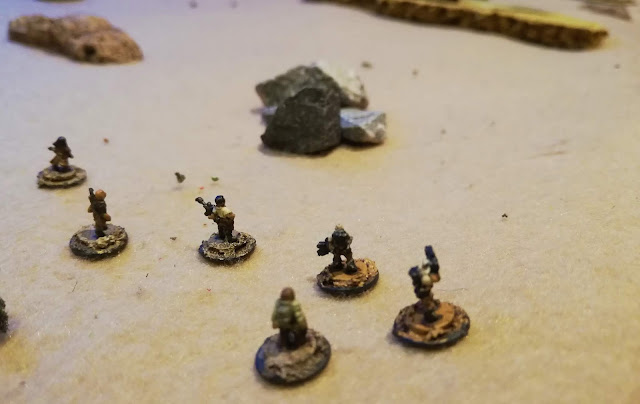 Exploring habitable planets pre-colonization was a good gig. Identifying suitable settlement areas, rich mineral deposits, arable land, or dangerous zones is an invaluable service and many corporations and governments will willingly outsource this job to nameless, faceless, expendable nobodys. Ulrich Nolan and Corde Tane are such nobodys. Scans from orbit had shown activity in this area, and as such it needed to be investigated. It could have been anything from local fauna, other exploration teams, pirates lying low or even an illicit colonization attempt. 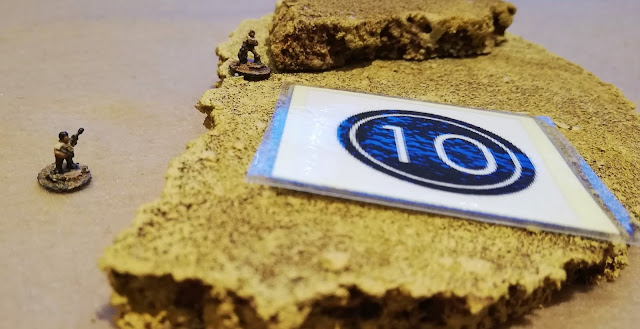 As Lief Weyer approaches the ridge he stumbles across a friendly face.
"What are you doing out ahead here?" he asks.
"Just scouting ahead," comes the reply. Happy for an extra body Weyer calls over to Nolan to let him know what is happening. 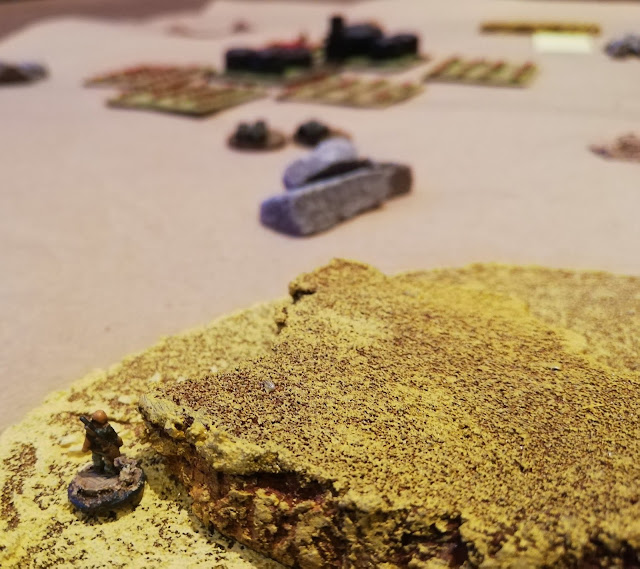 Ulrich Nolan crests the ridge and sees fields and buildings in the distance. This shouldn't be here. Deon b is an uninhabited planet and this place looks like it is more than just a pirate hideout. 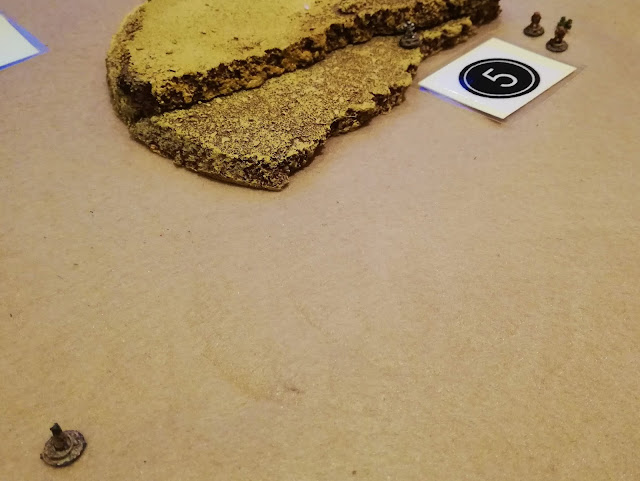 Corde Tane approaches another ridge and is ambushed by a few unknown gunmen. These armour-clad strangers might prove to be dangerous. Thank goodness for always being prepared. 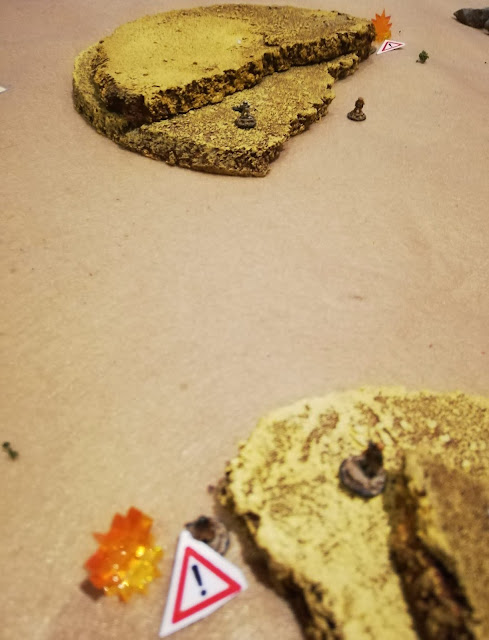 A fierce firefight ensues in which one of the armoured men dives for cover, as does Corde. Bullets fly, dust is kicked up. This exploration job might prove to be one of the more difficult ones. 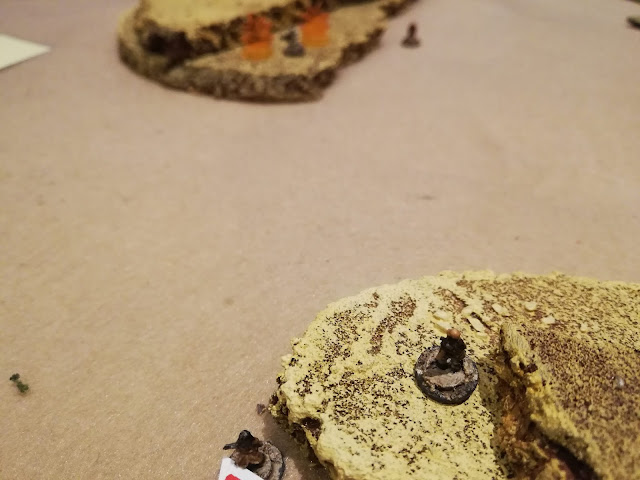 Ulrich unloads a few rounds at what looks like the leader, missing him miserably. 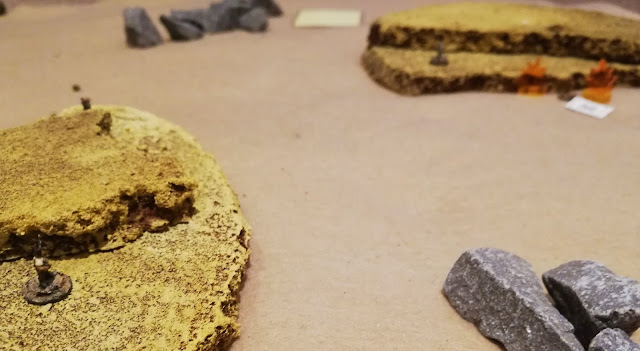 Weyer opens fire on one of the enemy goons, killing him. One less problem to worry about. 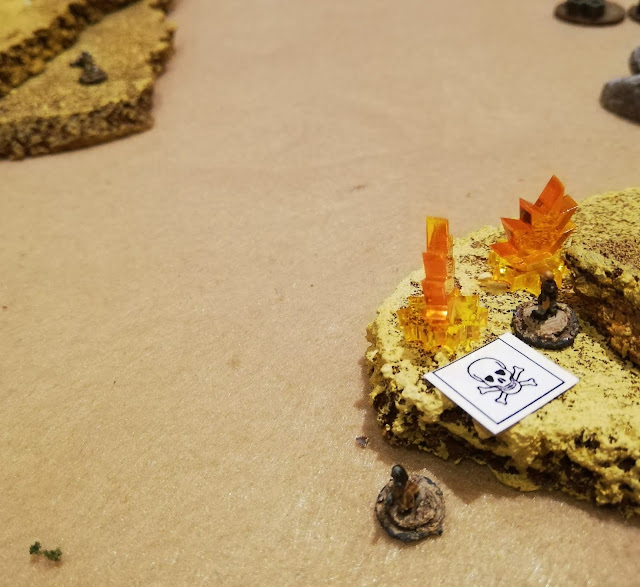 Popping his head up to get a good shot, Ulrich comes under more fire, takes a few hits and goes down bleeding heavily. Luckily he is able to stem the bleeding but is unable to continue the fight. 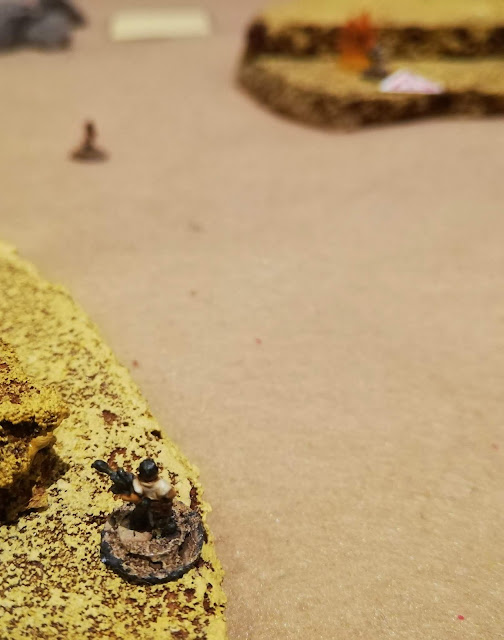 More fierce firefighting. Tane and Weyer doing their level best to keep the gunmen pinned down. Their fellows advance on the settlement in an attempt to find out what is going on.

While advancing towards the village another obstacle is found. This obstacle takes the form of a large, teethy, clawy beast. Definitely not one for the faint hearted! How is this going to impact things. 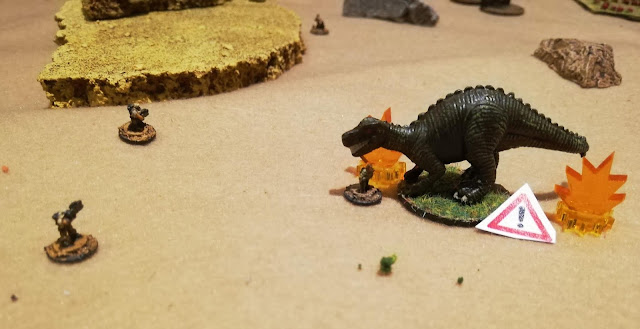 Thundering towards the grunts the beast attacks. It takes many hits, bullets finding their way through it's thick hide, but they don't seem to have much impact. Slowing this monster only slightly. 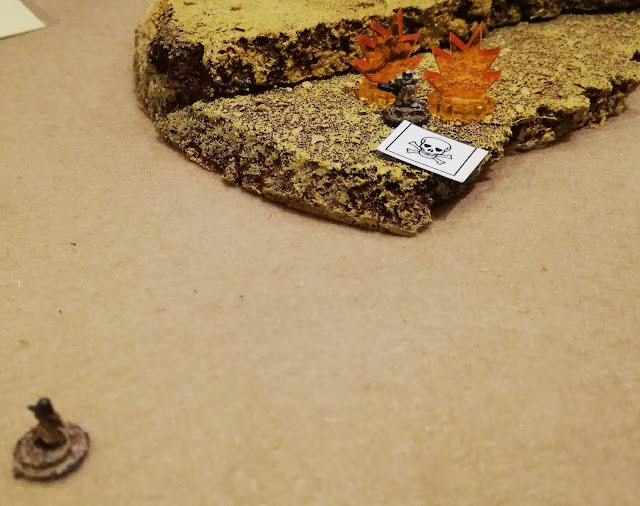 Corde manages to finally take down the leader, tearing his armoured torso to shreds with her shotgun.

Unfortunately three more mysterious gunmen appear. These uniformed miscreants look like they are on the payroll of a much more organised institution. Who could they be? 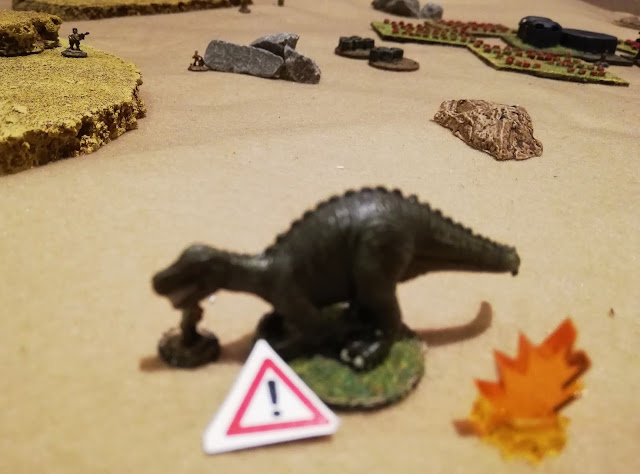 Weyer managed to keep the monster pinned, damaging the hide even further. 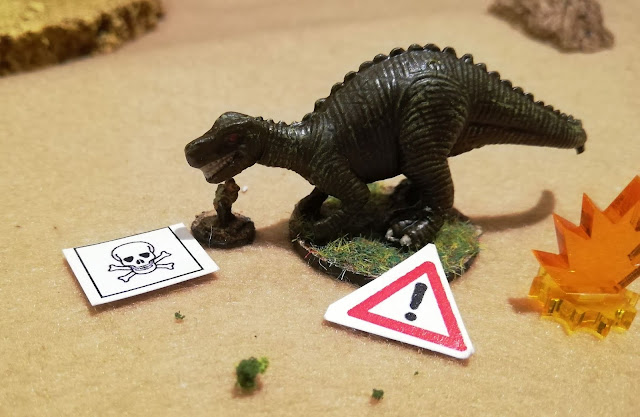 One of Nolan's team goes down in a hail of claws and teeth. There is little left of him to send back home. Weyer starts to think of the letter that will need to be written. 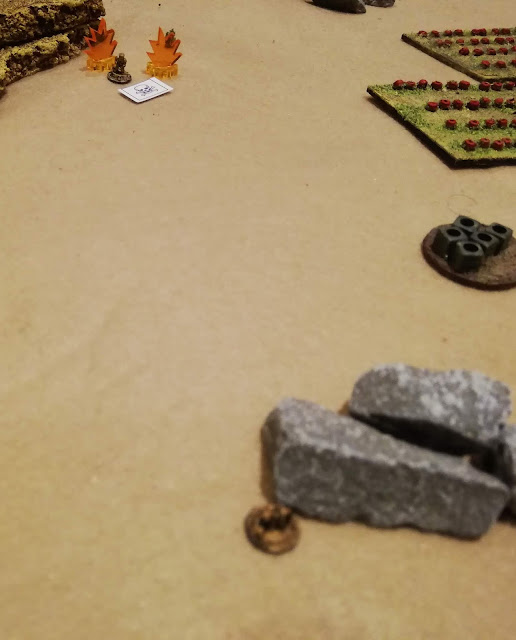 Grunt vs grunt. The last of the original gunmen is finally killed. 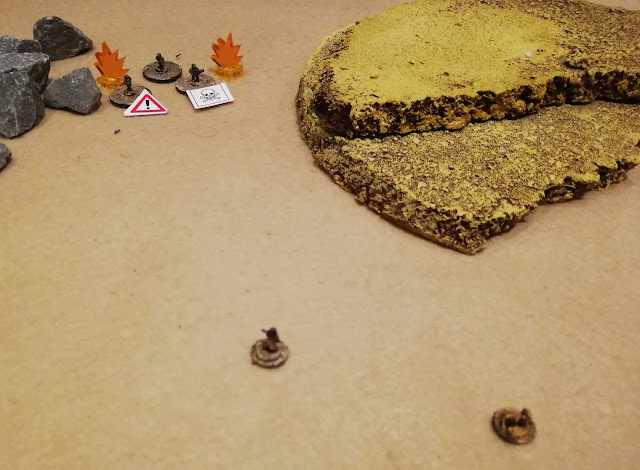 Corde and her companion pin and kill the new imposters. Keeping up this hail of bullets isn't, however, sustainable. They need to move on and find out more about this settlement. 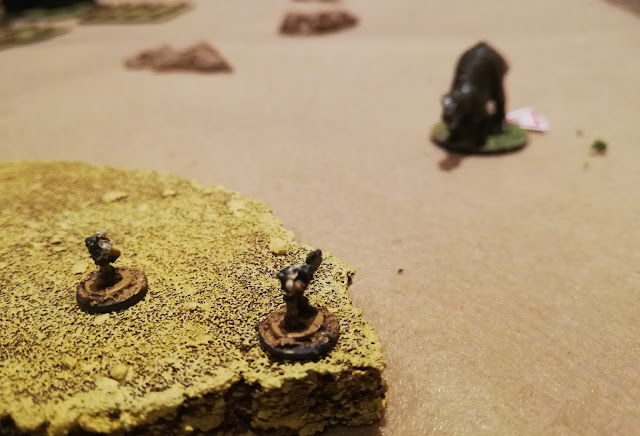 Backing up, the remaining grunts keep firing on the beast. 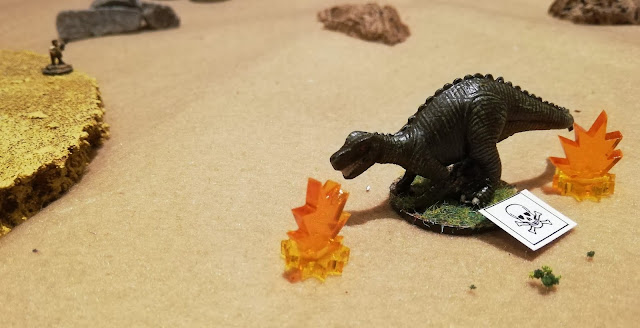 Finally, at long last, Weyer manages to take down the beast. It shrieks, hauntingly as it collapses. There might be something here. Something worth studying...or selling. 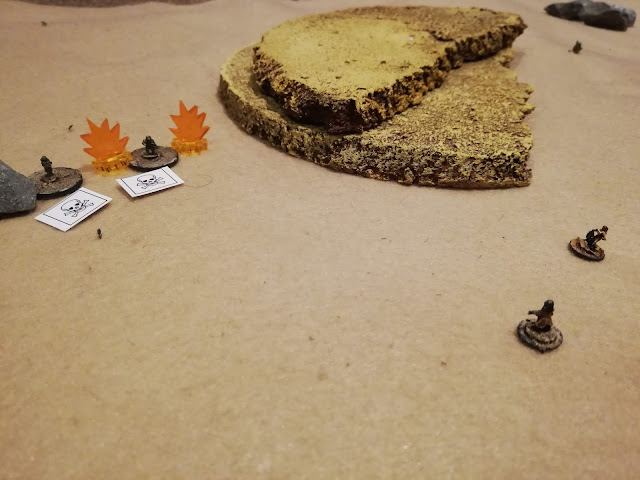 The last two gunmen go down in a hail of bullets. Their aim was poor, so maybe their employer had cheaped out on their gear and training, even though they looked formidable. 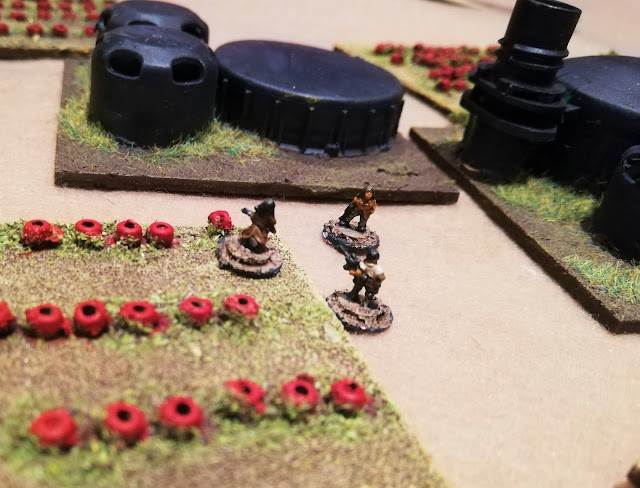 Corde and Lief enter the village and are met by a solitary figure.
"Who are you, and why are you here?" asks Corde.
"And what the hell was that giant creature?" adds Lief.
"Come inside" is the only response they get.

I loved the random event generator. It made me have to think less and be less worried about being biased in any way. I have missed playing Starport Scum.
Posted by James at 12:10 am