At last. I have finished some miniatures. Probably my first in two years. 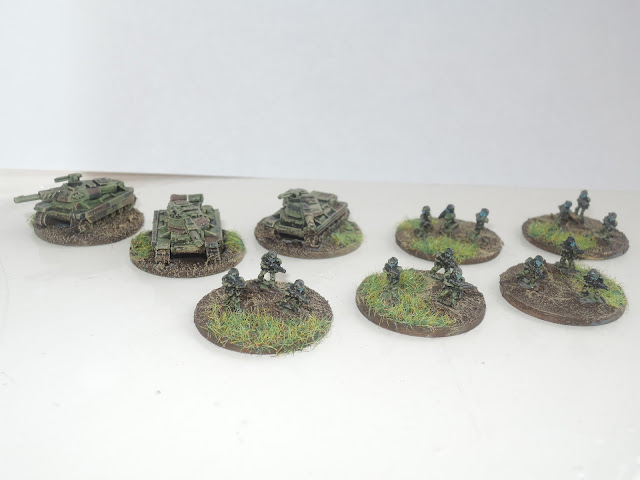 UCS (United Commonwealth of Systems) forces (although I might make the infantry belong to someone else because they are my favourite). These are the government forces. The UCS was originally formed by the Original Colonies to throw off the shackles of old Earth governments. Life on the colonies gave humanity a chance for a fresh start, to put aside their old prejudices and differences be it race, religion, creed. They successfully did this, and the power of Earth diminished, being left behind as a backwards world that while economically important, was not a key player in interstellar politics.

As time went on the UCS grew, and it was decided that their prejudice-free way of doing things should be "encouraged" on all of the colonies. This brought them into conflict with newer colonies who did not want to be under the rule of any interstellar government. It also leads to the occasional clash with the mega-corporations who have their own military wings and often govern clusters of their own colonies.

Above are the New Charon colonial militia. Equipped with outdated, yet reliable CSMP (Close Support Missile Platform) walkers, they are employed to keep peace and prevent incursion from government or corporate forces. However, if faced with a full scale invasion they would be swept away. New Charon is a colony established and governed by the Freehold, a group of quasi-religious humans who were looking to escape the bureaucracy and in-fighting of the UCS (United Commonwealth of Systems). 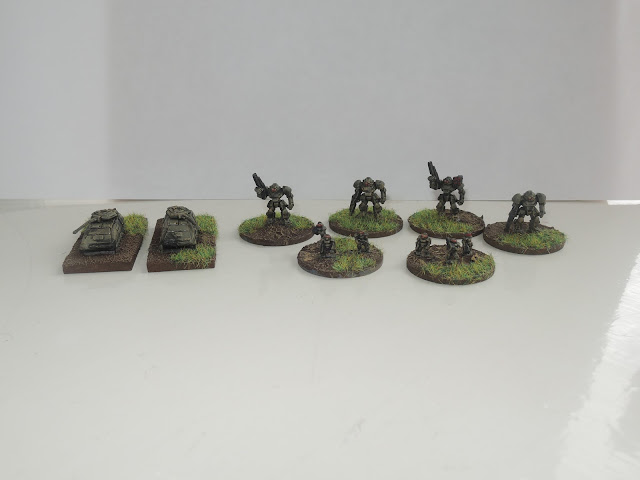 Again, these are Quansec Security forces. They are a part of the military wing of the North American mega-corporation who are often sent to pacify colonies and take possession of other economically viable colonies. They are generally well equipped with state of the are body armour and some new highly classified mechs. These mechs are so new and classified that their name is unknown, although their pilots have taken to calling them Jackals. 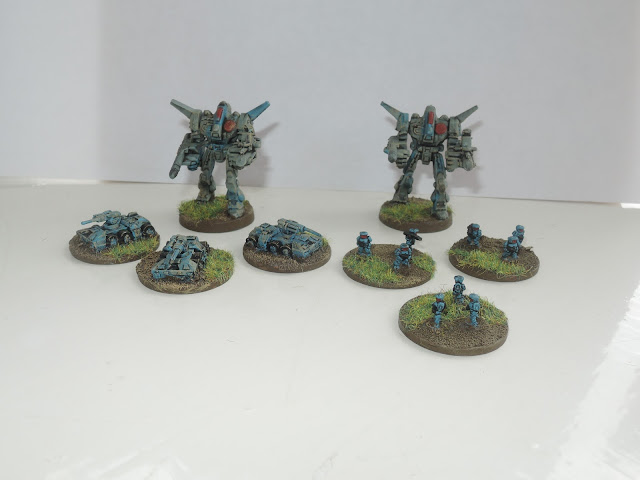 Hysys GMBH forces. Equipping themselves with large Zweibeinwaffensystem walkers (Zweibeins), their rapid response forces are designed to act as a deterrent against encroachment on Hysys colonies, or other interests. 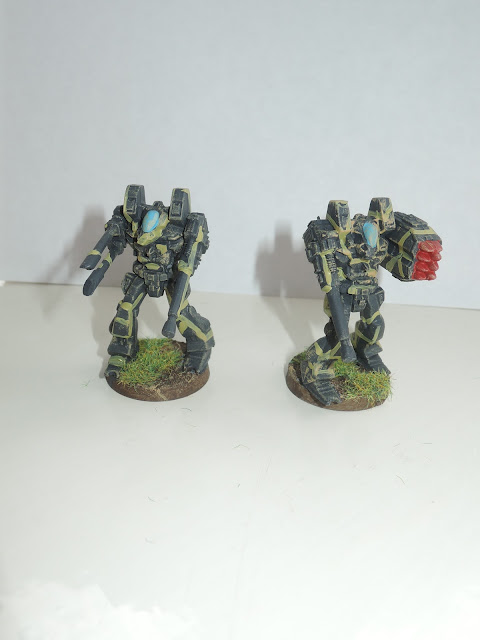 These large bipedal mechs are designed to punch a large hole in enemy lines. They are, however, very cost prohibitive and you will likely only find them in heavily populated, key systems. These two are Hysys designs, but are painted in the colours of the Collective. The Collective is a large group of systems who are in the process of trying to throw off the rule of the UCS. Unfortunately for the citizens of these colonies, the Collective is run by religious extremists, and as such life is not much better, and depending on the zealousness of the local leaders can be much, much worse than life under the bureaucratic juggernaut of the secular UCS.
Posted by James at 11:00 pm