In the initial excitement to expand the unknown, some planets were colonized that, as time went on, it became clear had little to no economic value. Even planets such as Helveka III, planets fairly similar to Earth in it's heyday, that would usually be a fantastic place to begin a colony, fell by the wayside. The Helveka system is too far out of the way to be part of a major trade route, and its natural resources are are too niche to support large scale colonization. In addition to these problems, the system lies near to the systems of the Collective, who attract the attention of the UCS, and also cause problems themselves. The only reason Quansec maintains a presence in this system is because of the gas giant Helveka V, and the research and development opportunities to be found. 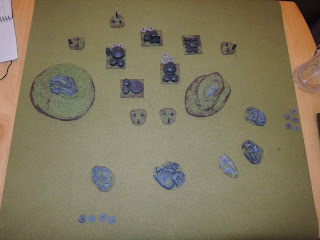 Meehua Colony. Abandoned 50 years ago, it still stands...mostly. The occasional ship crew will stop here for a while, just to be planetside for a time, but they always move on in search of actual profit making ventures.

Lem, Rhoro, Jarek and Flint advance up into the settlement. This is where Lem believes his wife is being held by goodness knows who. From the west, what looks like Quansec security operatives approach, their intentions unknown. Signs of life and occupancy exist in the village. 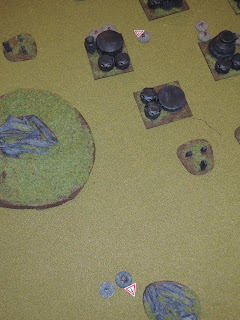 Throwing caution to the wind, Rhoro and Lem approach the outskirts, only to take fire. Lem dives for cover, bullets whipping past his head, while Rhoro returns fire, pinning the mysterious figure down. 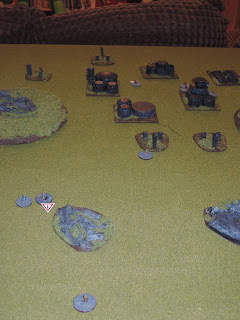 Hearing the shots ring out, and knowing that his shotgun is near useless at this range, Flint makes a mad dash towards the colony buildings. The "run you fools" rule allows me to add 2D6 to his normal amount (3D6) dice for his movement roll, AND add 3'' to the score. In addition to his trait that allows for +1'' anyway, Flint manages to advance 10'' but at the cost of not being able to fire and becoming pinned (hiding, catching his breath). 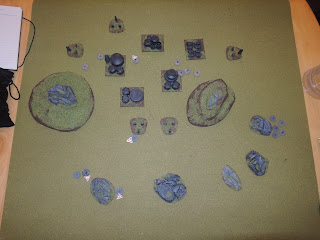 Jarek advances, more cautiously, although it appears to have been pointless. mysterious figures fire at long range, sending him to the ground, seeking cover. To the west, the Quansec operatives advance slowly, keeping squad cohesion. 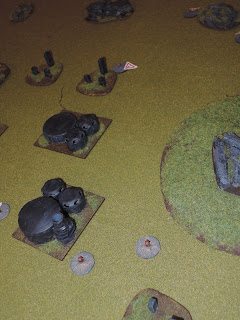 As there were no casualties, no morale checks were needed. Initiative went to the mysterious occupiers of the settlement and they unsuccessfully attempted to bring fire down on Flint. 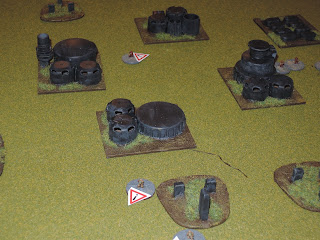 Jarek, deciding he needs to close range, sprints past Flint, but becomes pinned to catch his breath. 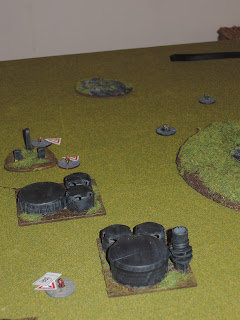 Rhoro takes a long shot at the pinned figure, killing him under a hail of fire. Because the figure is just a Goon, and was already pinned, a second pin makes him "down" (kills him). Bruisers, Aces and Heroes ignore second pinnings, as the rules currently stand. 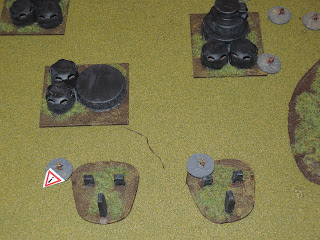 Flint moves westwards and fires at the red-armoured men, missing them, but making his presence known. 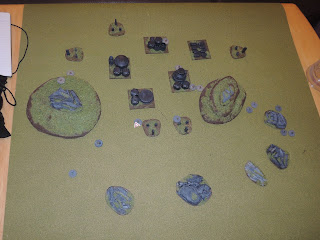 The turn ends with the occupiers spreading, attempting to flank our heroes. The Quansec operatives are still advancing. Because they took a casualty, the defenders need to take a morale test, but because their leader has a leadership trait it cancels out the -1 from the figure being down. 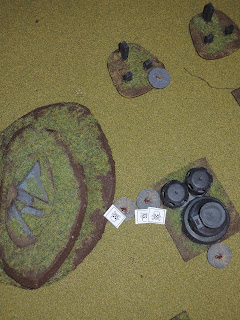 Flint gets the drop on the defenders and unloads shot after shot, the two most forward defenders going down in a hideous fashion under a hail of shells and blood. One death was horrible which will effect the morale roll even more next turn. 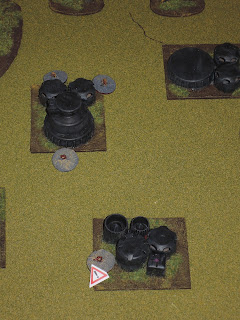 Jarek advances and pins the leader of the defenders, who had been hanging back, organising things. 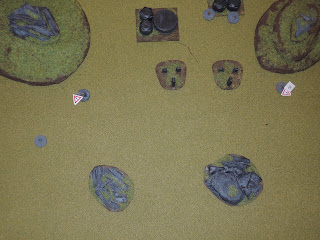 Lem and a Quansec operative exchange fire, pinning each other. Rhoro fires at the surprise attacker, killing him. 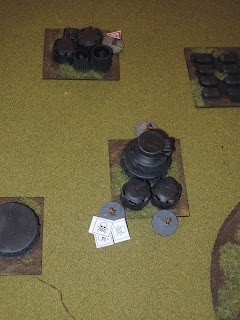 The leader of the defenders shoots at Jarek with his Gallet Rifle. This has the trait "piercing" which means it ignores armour rolls. He scores 3 hits, sending Jarek (a hero) down. However, I forgot that the leader is pinned, and should have only had 2D6 against Jarek, so while Jarek is out of the game, he might be just wounded and return at some point. The leader then advances to try and get a better shot at the others. 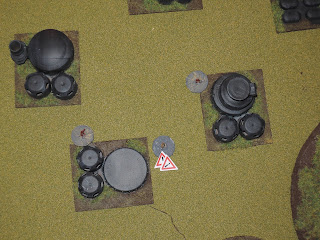 Enraged, Flint charges at the boss, pulling out his blade and trying to fight. His opponent was well matched and managed to evade, retreating a short distance, as one of his subordinates opens fire at Flint "wounding" him. I am not entirely sure what "wounding" does as it does not specify this in the rules yet (Or I have completely overlooked them, which is probably the most likely scenario). I am treating it as "double pinned" meaning Flint has -2D6 to his action rolls, and can recover 1 pinned marker each turn. 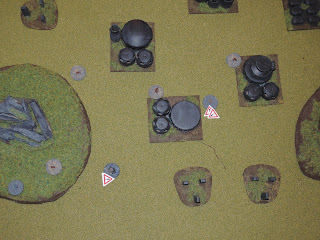 The defender on the hill pins Lem down, and his buddy tries to finish him off from the lower ground. 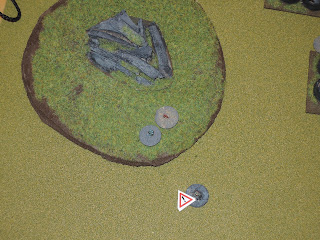 With Lem pinned, Jarek off comms and Flint under heavy fire, his suit giving him triage, Rhoro charges the defender on the hill, pinning him with a blow to the gut. 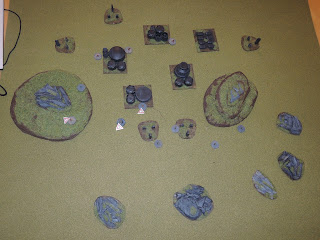 The Quansec team advance quickly around the flank of our heroes. They are in a bad spot right now. The turn ends and morale checks are made. The heroes pass theirs, and the defenders become rattled. However, with their leader's trait, they can fail one morale test while rattled and not have it count. 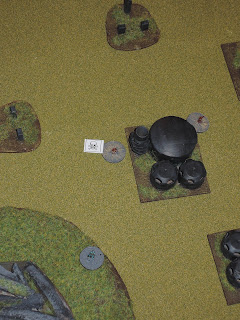 Rhoro takes down another defender. 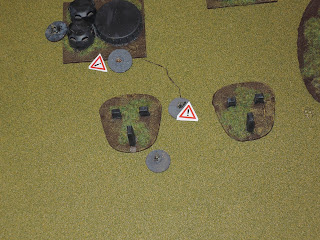 Flint recovers slightly and exchanges fire with the Quansec operatives behind him. 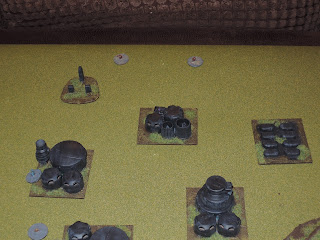 While the heroes are distracted with the Quansec forces, the leader of the defenders and one of his team escape into the distance. Our heroes consider chasing after them, but need to search the buildings for Lem's family and deal with this Quansec threat. As the operatives advance in the new turn, Rhoro connects to their comms with a successful roll, and opens communication. 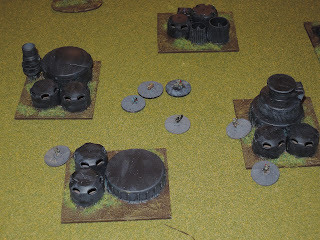 Apologizing for taking one of the operatives out, an agreement is made. The Quansec squad are the remnants of a group that went rogue when they discovered that the Sector Commander of Quansec was dealing with the gang defending the village. They are people smugglers, which is considered a crime in this sector. Not wanting to be involved with that, this team waited until it was their rotation to sweep Helveka III for pirates and then never went back. This team no longer exist and are considered dead. They remained to hunt down and take out the gang of people smugglers run by a man known as The Buzzard.

"How would you like to combine resources?" asked Rhoro of the squad leader.
"It would be a waste not to."

After sweeping the buildings for survivors, none were found. However, this is not the only settlement that comprises the Meehua colony, and the Quansec team had come across other concentrations of this red-armoured gang.
Posted by James at 1:49 pm