"Anything you need to tell me can wait until we get off this station!"

Those were the words said by Rhoro to Lem, the "bounty" who turned out to actually be a Collective sniper in the process of defecting. After a slightly messier bounty collection than anticipated, the station was on high alert and the remaining Quansec security team had gathered to bar the airlock and force Rhoro and team to give up arms. If bounty hunters were being sent to collect this prisoner, then he must be worth something.

Another craft has docked. Four men in armour similar to Lem disembark. Armed to the teeth, they intend to find their lost brother and bring him home to repent and make amends for his sins. Desertion was one of the greatest sins, an affront to the gods. 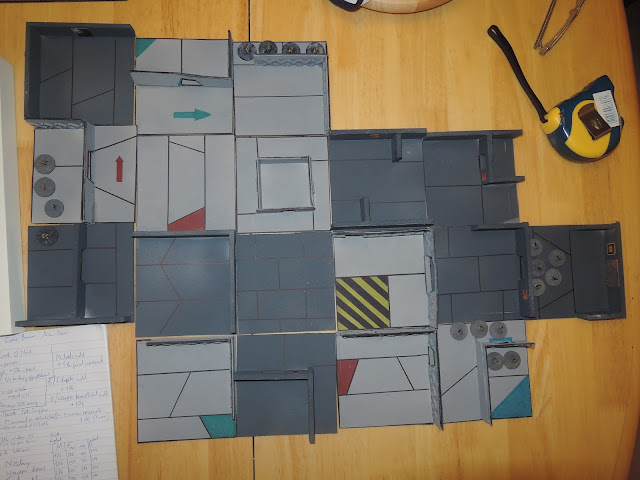 The station, looking like it has been cobbled together from different parts of different stations. Rhoro's crew are on the left and need to get to the airlock on the right. Two squads of Quansec guards are positioning themselves to defend, while a Collective strike team get into position. The Collective soldiers will not activate until Rhoro's team move into the third section of the station. 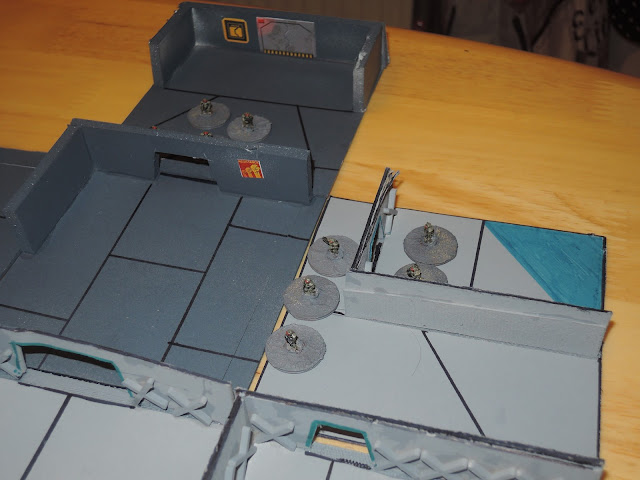 The guards begin advancing in order to guard the door. I used squad moves here, which was nice and no hassle. The issue is I don't know if they are allowed to fire afterwards or anything. 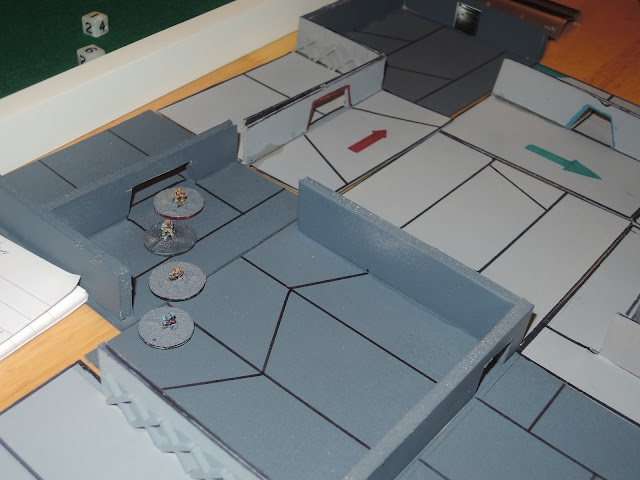 Rhoro's team begin making their way to the airlock. Guns locked and loaded, they are ready for trouble. Lem is armed with a gun he picked up from one of the unfortunate Quansec guards left bleeding out on the detention level. 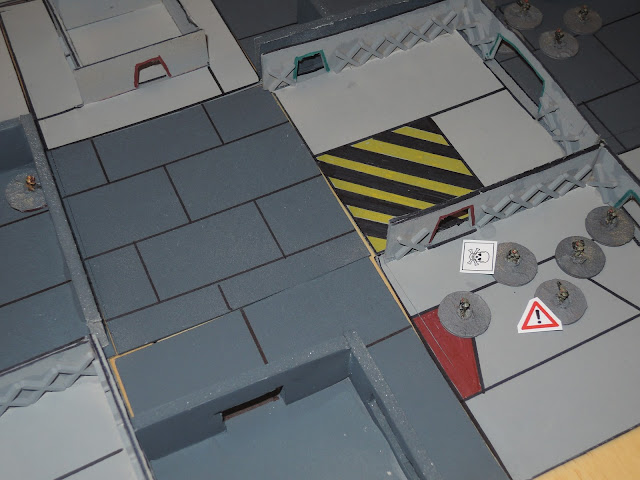 Flint Church arrives at a doorway, spots the advancing squad and fires some shells towards them. It was done to great effect as one guard dives for cover and another crumples in a pool of blood. The guards look at each other and resolve to take revenge. 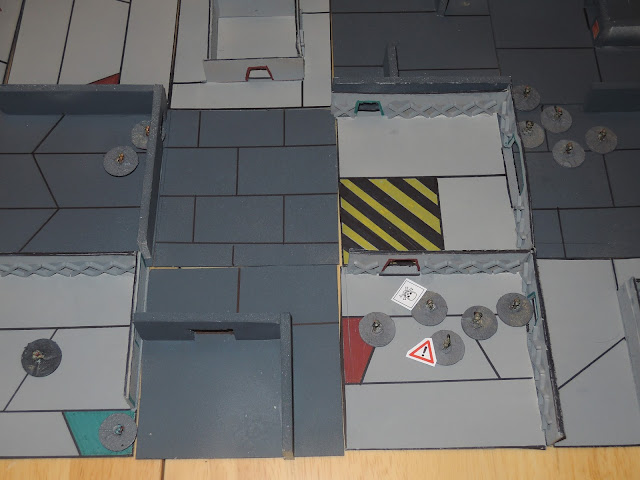 More shots are exchanged, but body armour does its job. 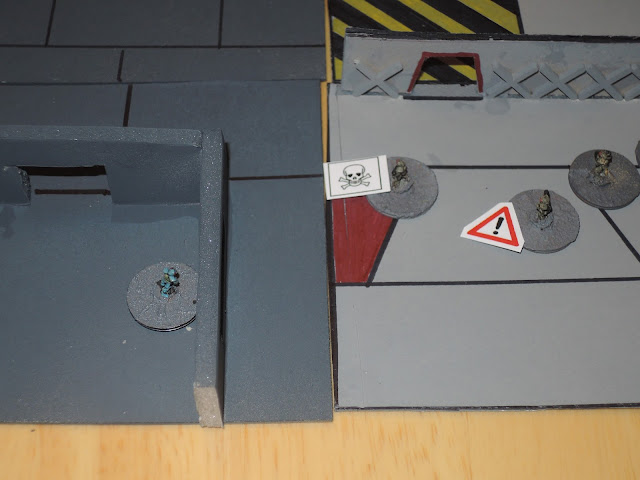 Rhoro pulls out his Raptor pistol and fires through the window, finding his target who falls back with a thud. His partner is still pinned, but the other guards open fire. 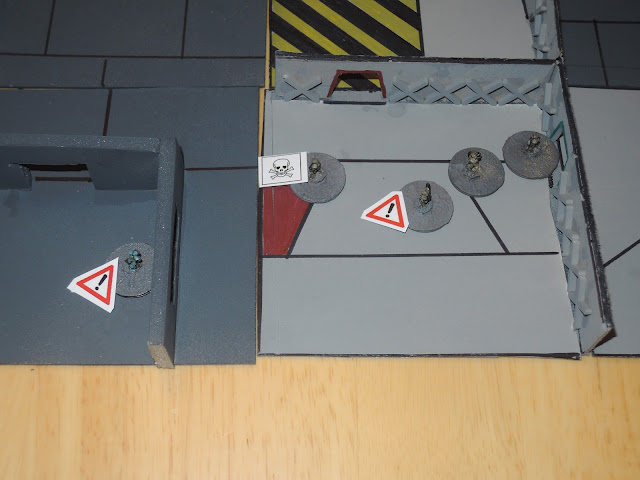 Bullets rattle around the window and ping off Rhoro's armour. He ducks down to take his breath. That was close! 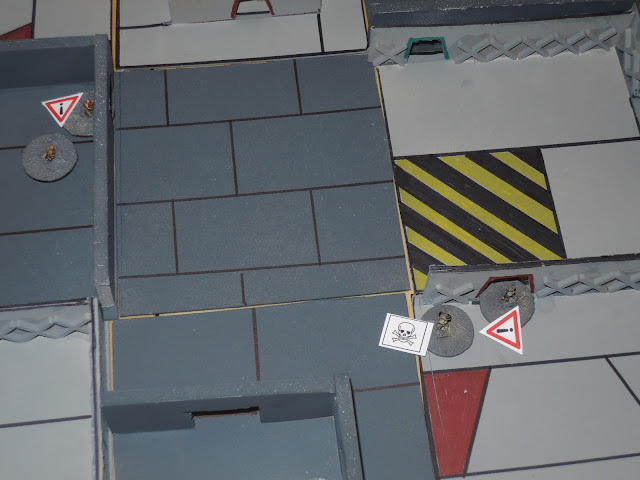 The pinned guard pulls himself together enough to advance to the hatch and let a stream of bullets loose in Flint's direction, pinning him down and sending him scampering. 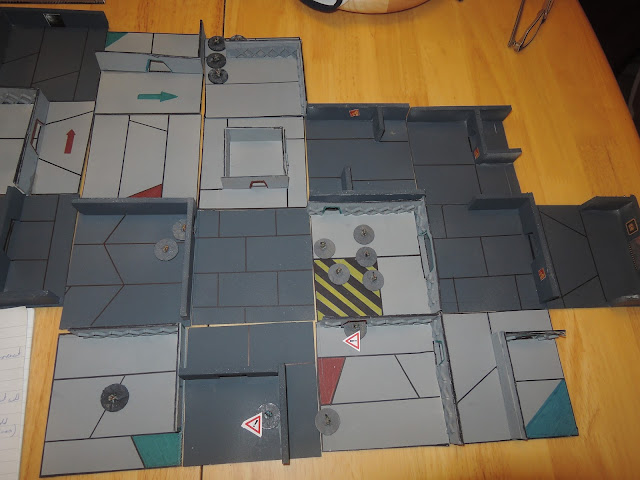 The other squad advances up the centre, while the Collective strike team begins to advance in an attempt to flank our heroes. 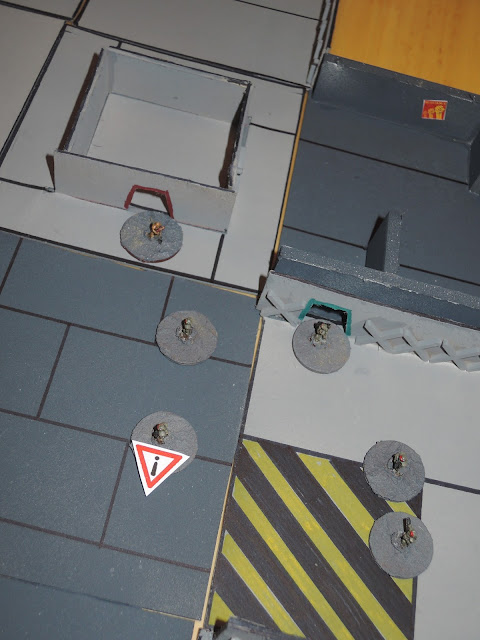 Aware that they need to reach the airlock, Flint charges in and fires his powerful shotgun into the squad. Miraculously only one guard dives for cover (although now I think about it, I think he should actually move 2 inches towards cover as he was pinned in the open). 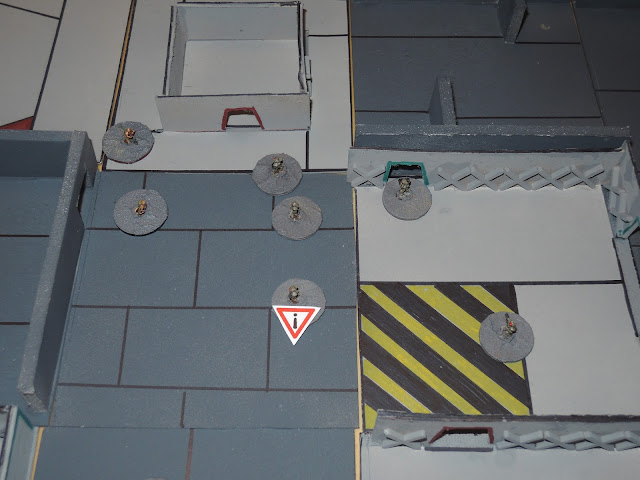 Jarek also advances, not having much luck with his shots. A brave Quansec guard charges Flint with his P-Blade. Flint manages to evade the attack, but is forced to back up a little. Jarek looks over...this might be more difficult than expected. 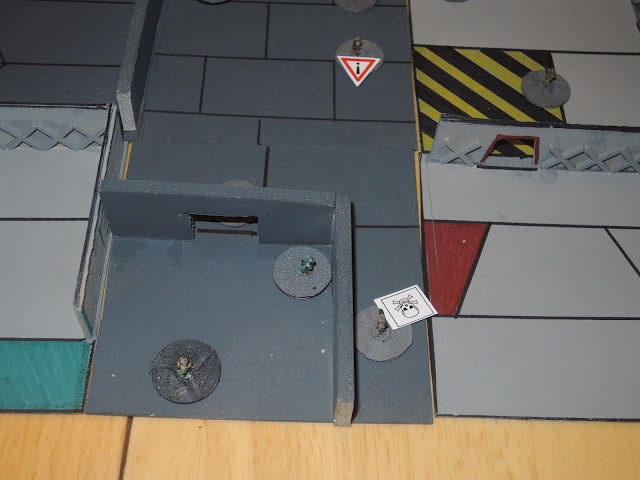 With Rhoro in cover, a guard charges, but Lem returns fire, quickly dispatching the would-be-hero. 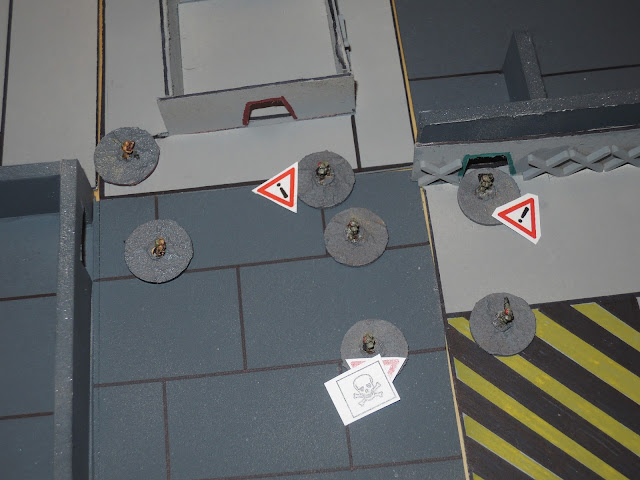 The guards pass their morale test again, but lose the initiative. Flint fires into the squad, this time pinning and killing over half of them. Two guards find themselves unscathed... 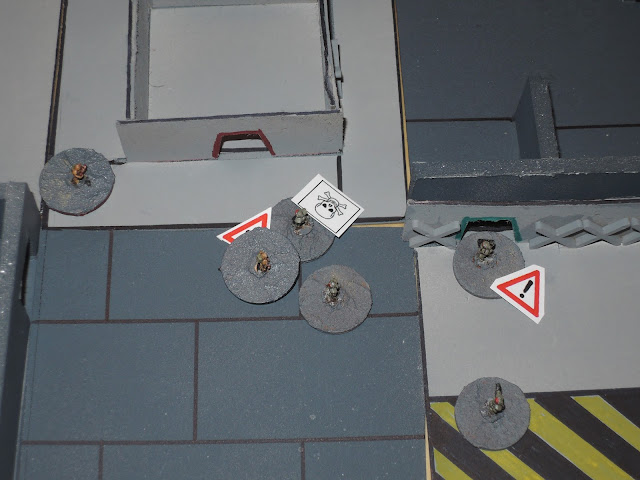 ...only to be charged down by Jarek. His knife finds a gap in the Quansec armour and blood gushes out, staining his orange glove a darker, browner shade. 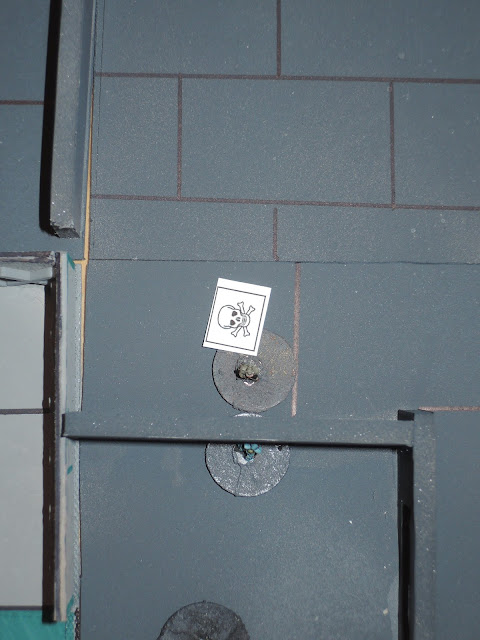 Rhoro charges another guard, again finding a sweet spot just under the armpit. 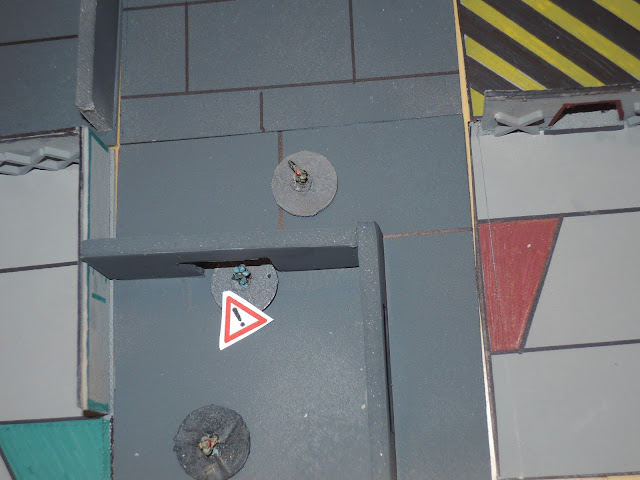 Another brave guard opens fire on Rhoro, pinning him yet again. He needs to be more careful. 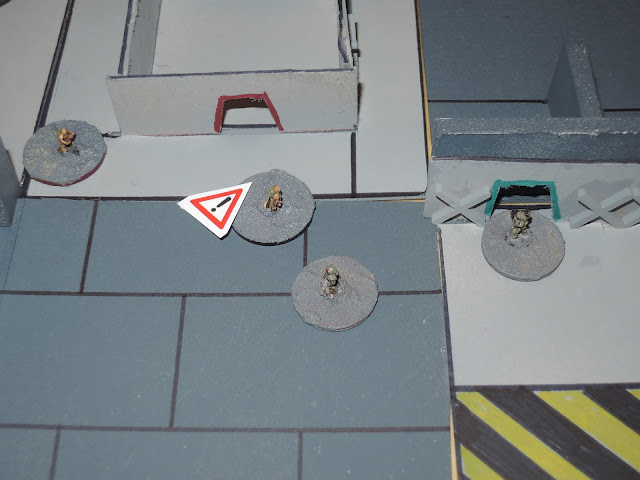 The remaining Quansec guards fire on Jarek, pinning him down, but no bullets find their way through his armour. 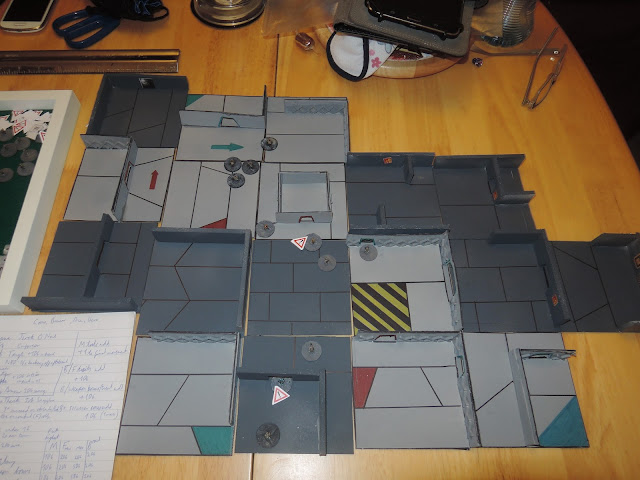 The Collective strike team are about to show their stuff. 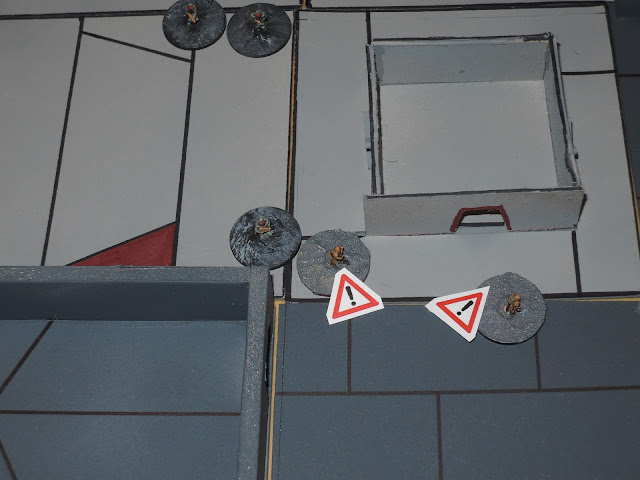 Charging Flint, one of the Collective soldiers manages to knock him down and keep him pinned. 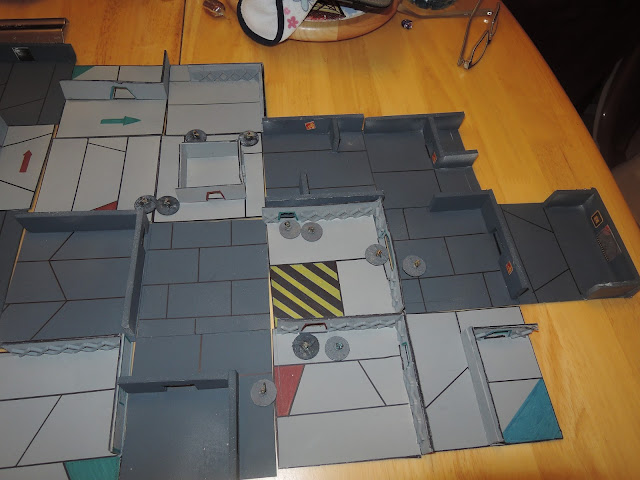 At the end of the turn, the Quansec guards give up the fight. With only three remaining of the ten, they lay down arms and realise they don't get paid enough for this...
Rhoro and Lem have decided it is time to go. Jarek and Flint charge for the airlock. 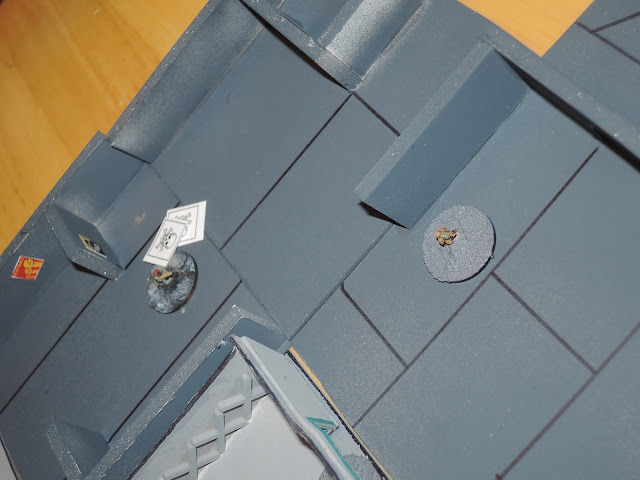 Flint turns around on his way to the airlock and blasts a collective soldier away, his armour shredded to bits. 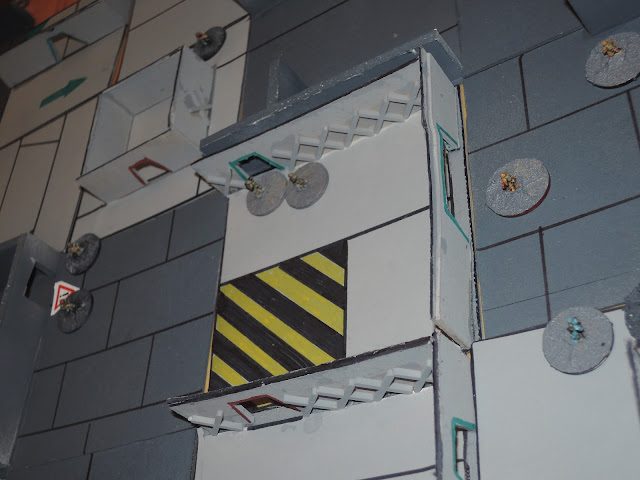 Jarek runs up, then turns to pop off a shot, pinning one of the collective soldiers. 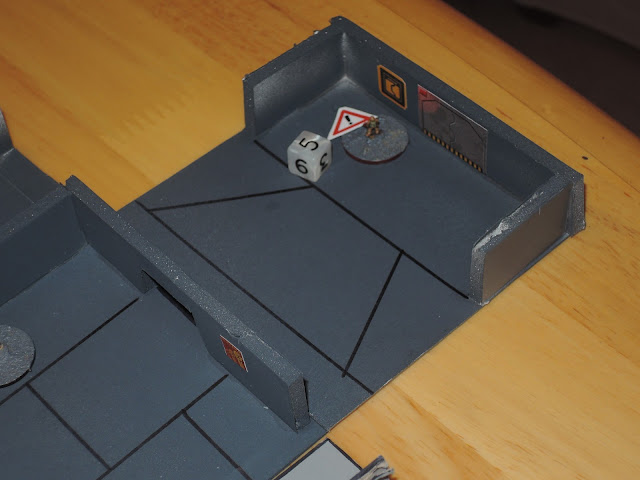 Flint gets to the airlock, pinned down from other shooting, and he successfully unlocks the airlock. 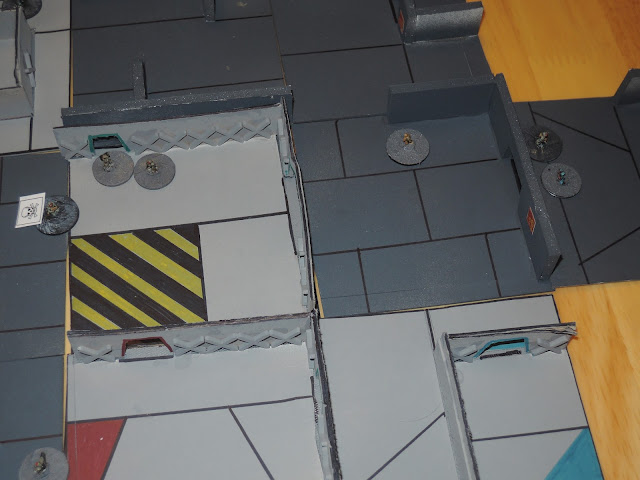 Rhoro and Lem get into the airlock room, and Rhoro turns to fire off another Raptor round, penetrating the faceplate of the Collective soldier. He collapses. 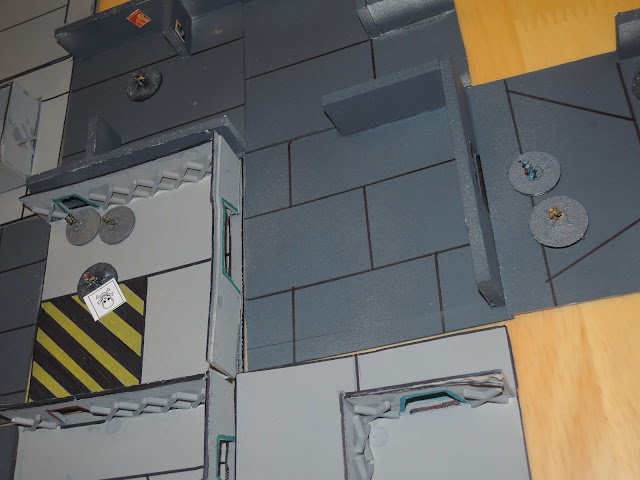 As the airlock opens with a hiss, a Collective soldier tries to shoot at our heroes, but is dispatched by Rhoro. The team pile into the pressure chamber as the door closes behind them. They had made it, and could fly away into the proverbial sunset.

Collapsing into pressure couches, as the ship departs, discussion opens up about exactly why Lem defected and what he wants.

"I need to return. I was found on Helveka III in the abandoned colony of Meehua...things were happening there. It was meant to be abandoned, but there is too much activity going on"

"Why is that any of our business?" asked Rhoro.
"We don't need to get involved in random things like that. Maybe bounty hunting is not for us," added Jarek.

"My...my family is there. Or at least I think they are. In the Collective if you do not comply, you family can be taken and sold into slavery. I have been searching for them for five years now and believe they have ended up on Helveka III in an abandoned colony for some reason. Please help me...I can't do it alone."

"I always was a sucker for a sob story" replied Flint.
"Yeah, me too. And I haven't been planetside for too long. Would be nice to have some steady ground under my boots for a while" said Jarek.
"I guess we are going" finished Rhoro, "tell us everything we need to know."
Posted by James at 9:34 pm