Sat down for another game of Battlegroup the other day. I have to say it was my favourite game yet. I am really getting the hang of the rules now. Unfortunately I didn't actually manage to finish the game as something came up during turn 6 or 7, but it looked like it was going to be over soon anyway.

The forces:
American infantry holding a defensive line that is a tied together with the wooded hill and the village.
1 infantry platoon with an HQ squad, 3 rifle squads and 3 BAR teams
2 MMG teams
1 81mm mortar
1 57mm AT cannon + loader team
1 M8 Greyhound
3 M4 Shermans, one being the MVP from last battle and as such gets a free pass on a morale test if it occurs. I couldn't justify it to myself to flat out upgrade it to elite for free. I didn't want to pay for an upgrade, because that is just boring. I needed it to be special, extra, earned. I also wasn't sure if this morale test pass would be special enough though.
BR rating of 28 I think. 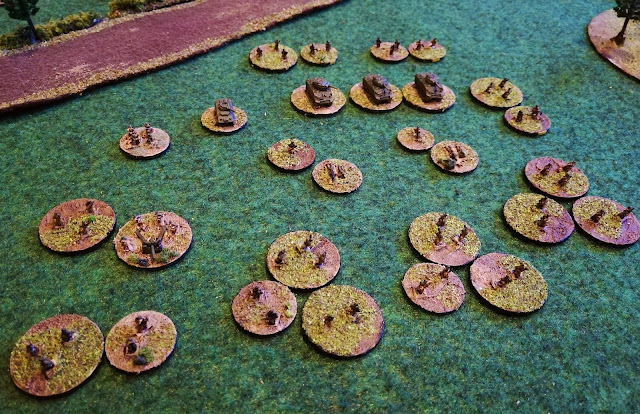 The Germans ordered to counter attack are as follows:
1 Panzergrenadier platoon - 1HQ squad, 3 grenadier squads, 3 MG34 teams.
2 MG42 on tripod teams
3 Panzer IVs, one of which is an ace (making it elite)
1 StuG III 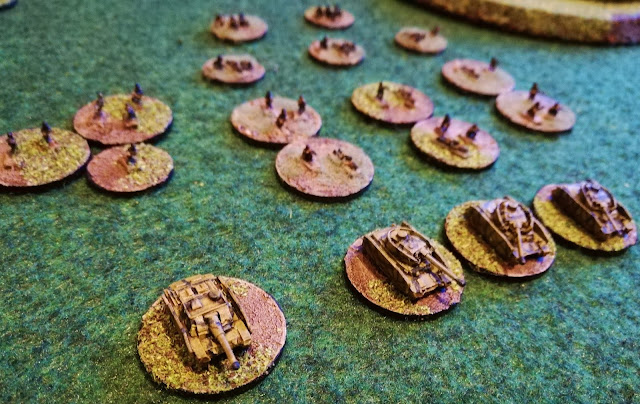 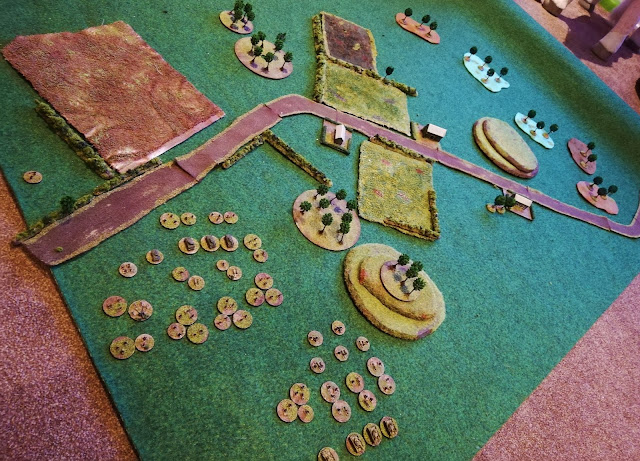 I moved the battlefield across a little, but when setting up it didn't feel like it. The central part is the same, but in the end all it feels like is I added 12 inches deep of wooded areas. The Germans will be attacking out of the woods towards the farms. 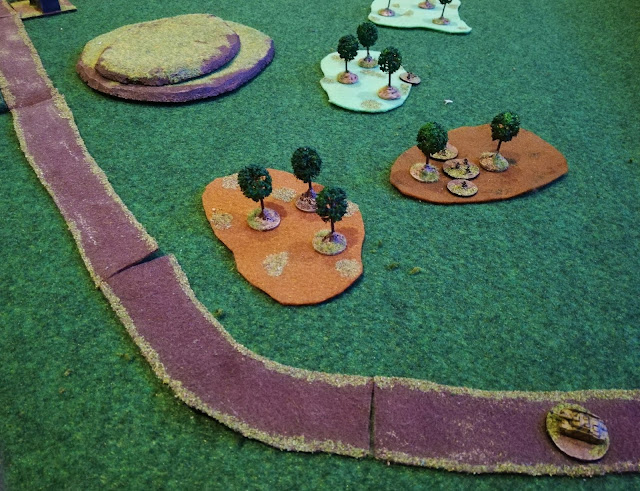 Initial German probing forces consist of the platoon HQ, an MG34 team, and a StuG III. They have no reconnaissance units to come on either, so the scenario limit is just three. 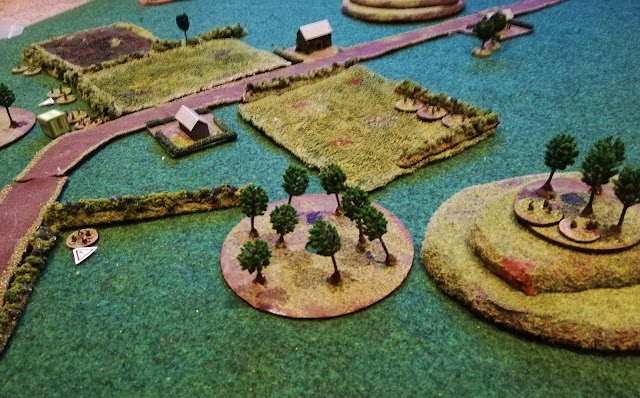 The US defenders rolled their 2D6 for initial defensive line and got 6. The platoon HQ position themselves on the hill to spot for the mortar down on the low ground. An infantry squad in the field up front. Holding the centre, covering the road and fields is the 57mm cannon and it lies in ambush. On the left flank is a BAR squad and an MMG team. They begin with the mortar and BAR teams pinned from an initial bombardment. 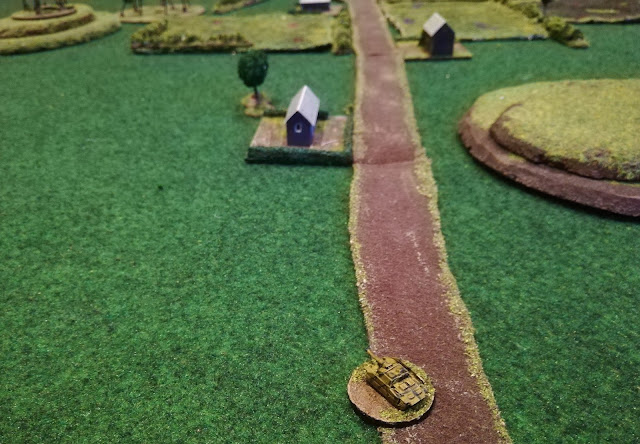 Turn 1: The Wehrmacht platoon commander manages to get all of the probing force moving. The StuG III advances up with the intention of circling around and taking the wooded hill overlooking the farms. 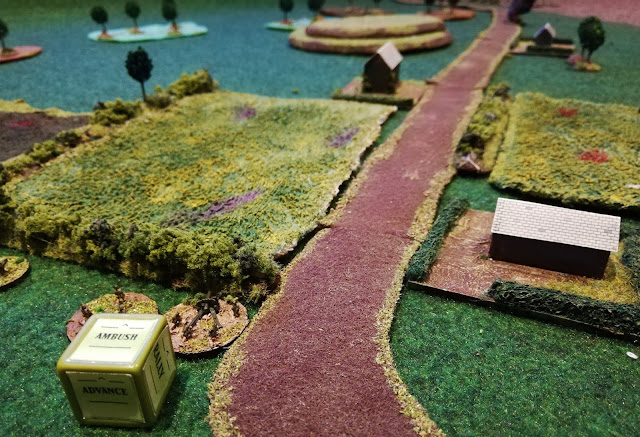 Crack! A 57mm round is fired at the advancing StuG.

The die is one of my home made Bolt Action activation dice that I used once when I played that one game years ago and have since remained in a bag since then. 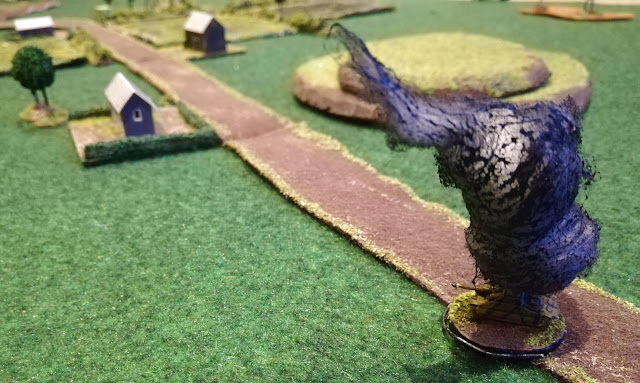 The round penetrates, brewing up the StuG.


The 57mm is a better gun than I had initially thought. But then again my only reference point is from more than a decade ago when I played these rules with my brothers and we never actually finished a game. It didn't have much punch. Also the StuG...died right at the beginning to a 57mm again. I mean what does a guy have to do to have a StuG survive the first turn? 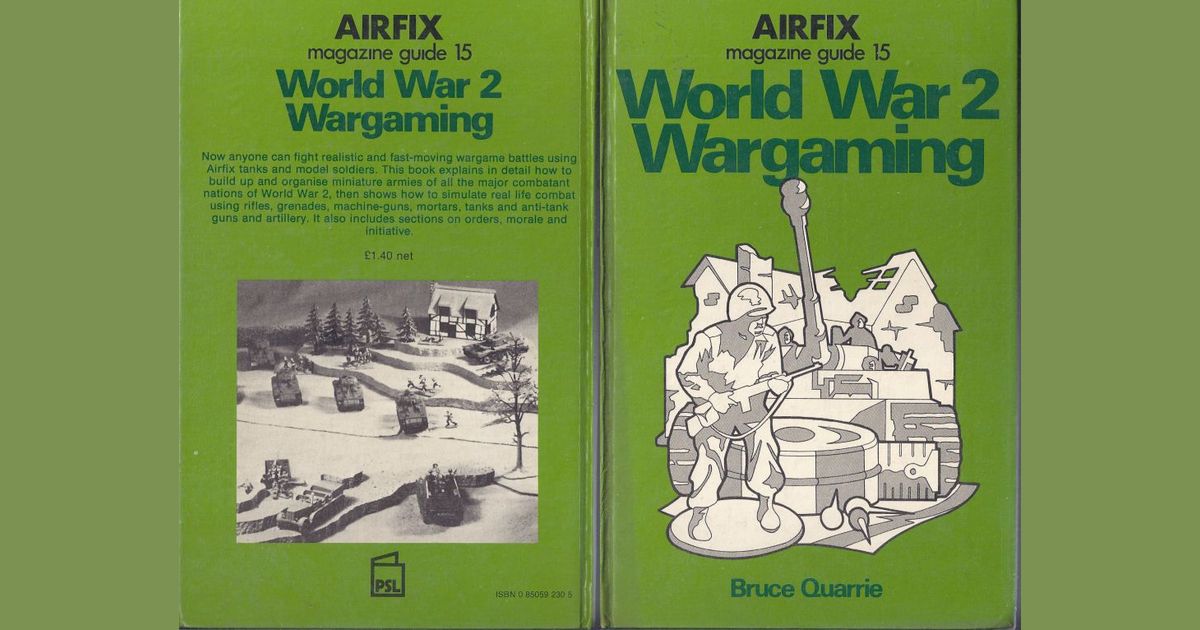 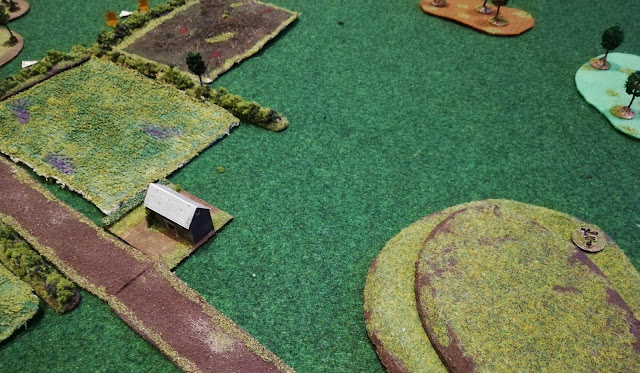 The MG34 team advance up the hill and open fire on the .30 cal team, pinning them.

The US commander orders his forces into ambush positions and manages to rally the mortar team and MMG team. 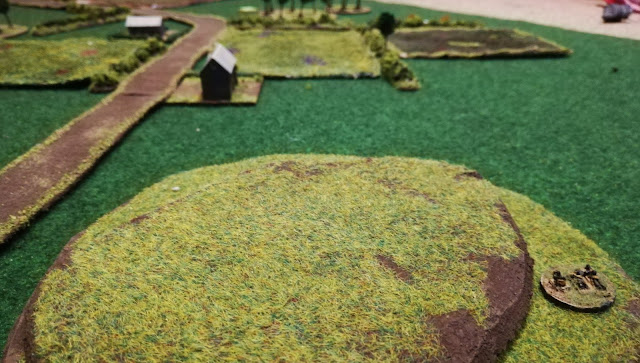 Turn 2: The MG34 team opens fire on the US infantry again. 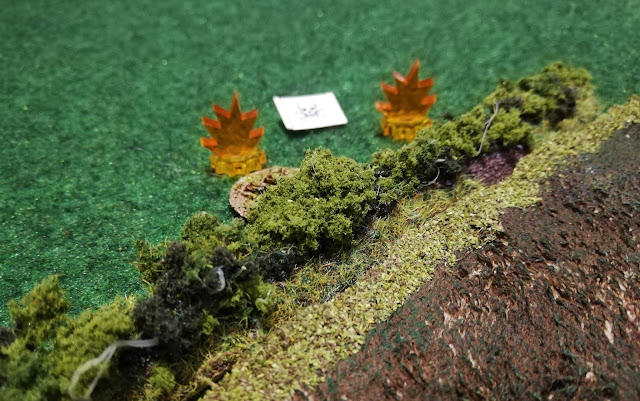 ...causing a casualty. The remaining two GIs rally and remain in place, themselves returning fire on the MG34 team.

They actually rolled a 6 on their morale test, which means they were eligible for a "beyond the call of duty test" which would mean they could make a free action. They failed that roll though. 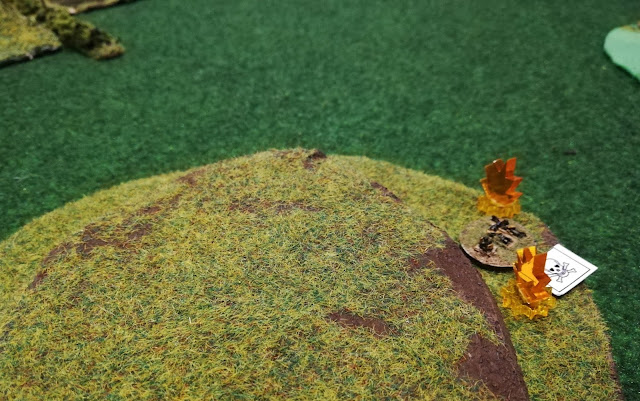 The .30 cal team, opening fire on the MG34 team kill them to a man. That is some sharp gunnery. On the flip side the platoon commander fails to order a successful mortar strike against the German HQ in the woods.

German commander pulls a chit. BR up to 9 now. An awful start, really. US BR 5 to unpin infantry. 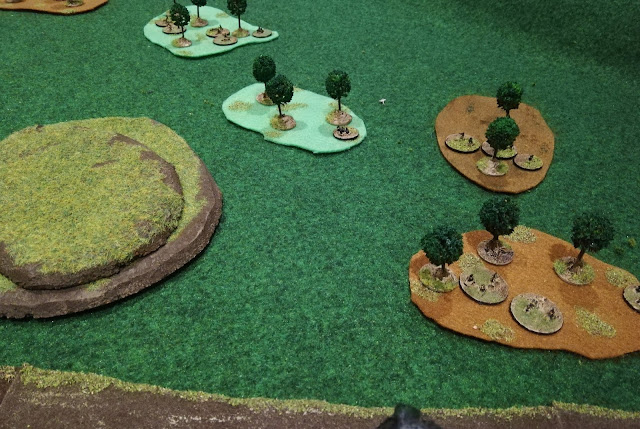 Turn 3: German reinforcements arrive: the Germans were allowed to bring six units on the table and advanced all the infantry up into the woods. 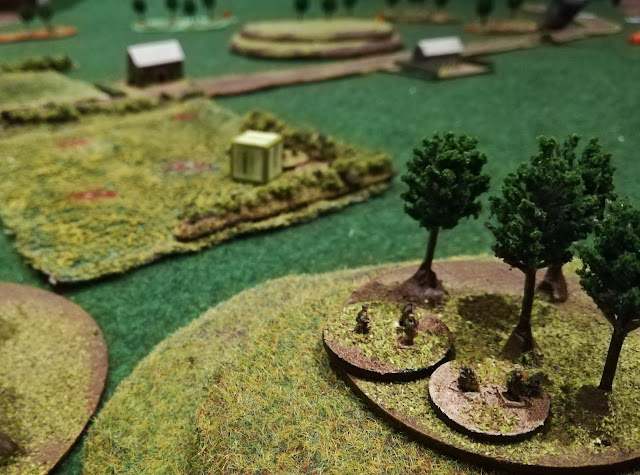 The US commander spots movement in the woods so orders the mortar team to open fire.

Thanks to help on the Battlegroup Facebook group I learnt that the communications test for a medium mortar is 3+. 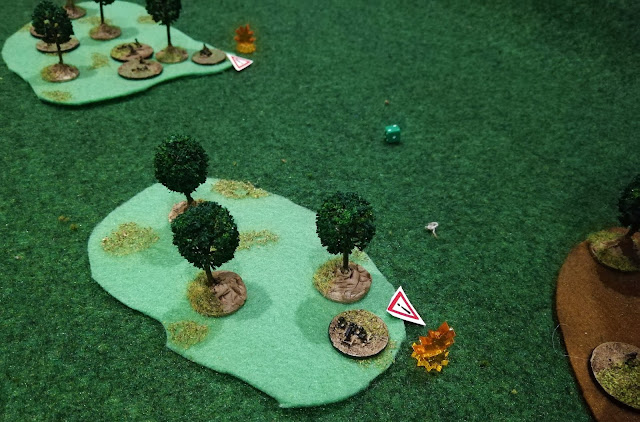 Two MG42 teams get pinned down by mortar rounds.

The spotter round missed quite a bit, but the 10 inch radius of artillery fire is nice. I like the way artillery works. Again, I was used to those Airfix rules where each individual shell was tracked, and had a blast radius. Mortars were something like 3cm radius, but could go way off course. I like that in BG the blast radius isn't physically measured, more that you roll more dice to get more casualties. 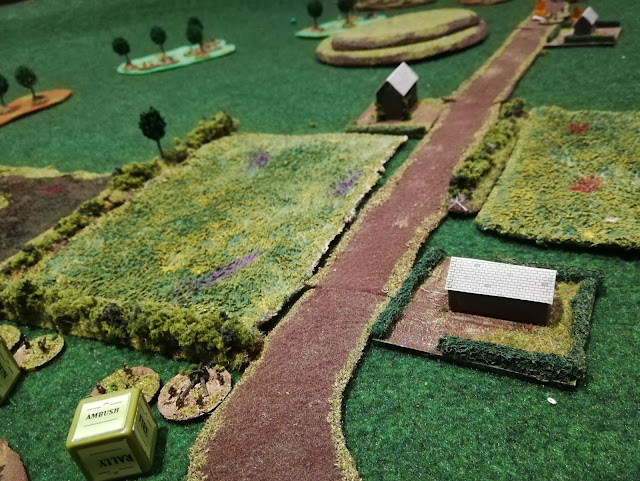 Turn 4: A German squad advances across the road to the outlying farm but gets ambushed and pinned down in the open by the 57mm crew. 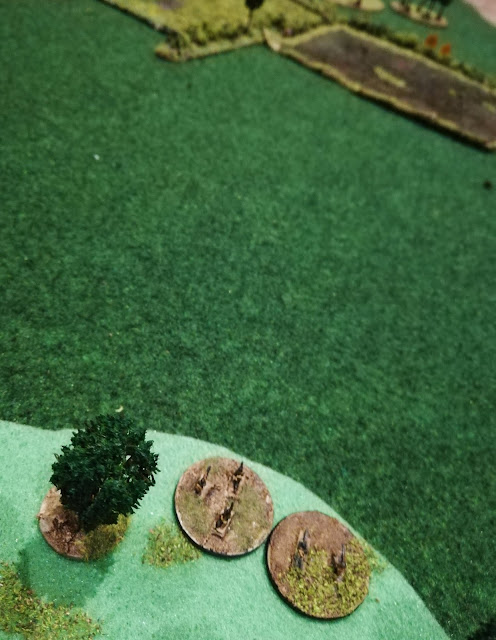 A grenadier squad opens fire on the .30 cal team... 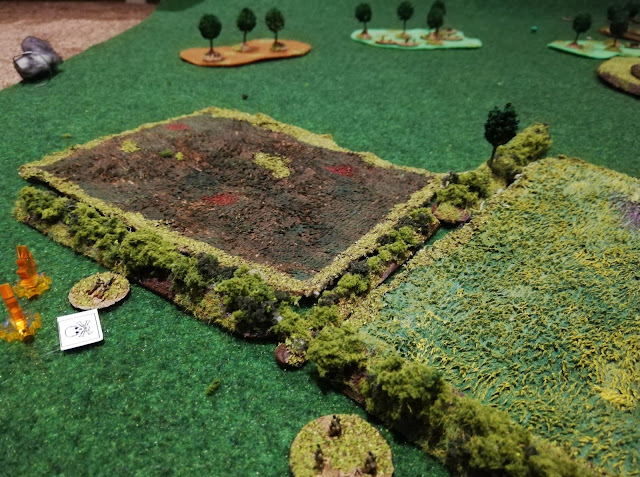 US commander takes a chit. Up to BR 8. 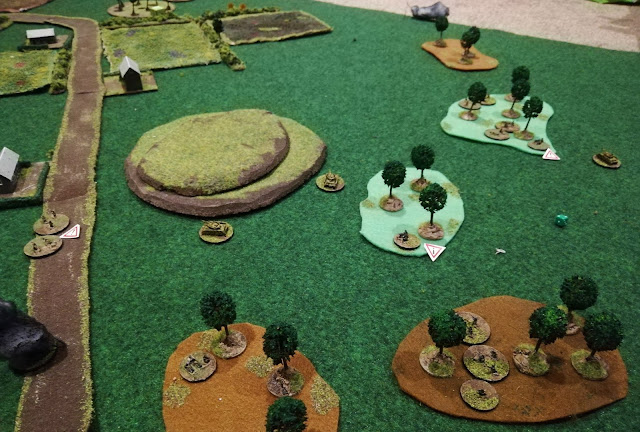 The German panzers arrive! They advance up the field to begin opening fire on the defenders. One circles around the flank, while the others remain protected from the AT gun behind the hill.

German commander tries to unpin three units and ends up with 14BR. 10 left to go.

The US commander tries to order a mortar strike but it goes wildly off course. However a grenadier squad is caught in the blasts and hunkers down, pinned. 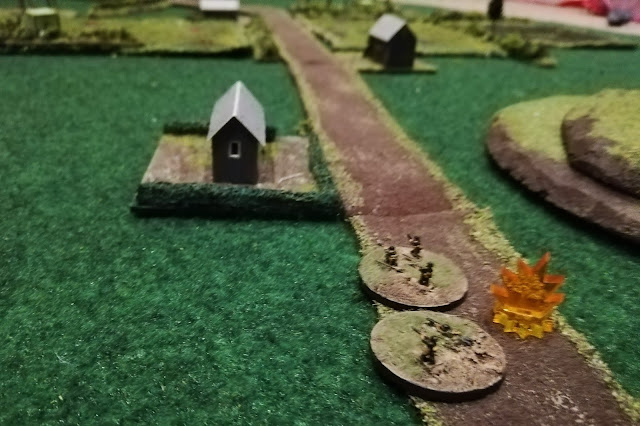 The 57mm cannon tries to punish the grenadiers on the road, but misses. They will live...for a while at least. 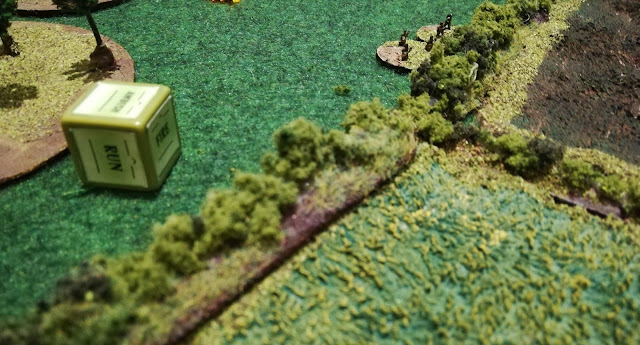 In an attempt to sure up the flank the BAR squad advances along the hedgerow and opens fire on the grenadiers in the woods. They miss though and the fire is ineffective.

The Panzer IV gun is powerful, and is actually a great HE gun. More and more I am pleasantly surprised by things in this game. 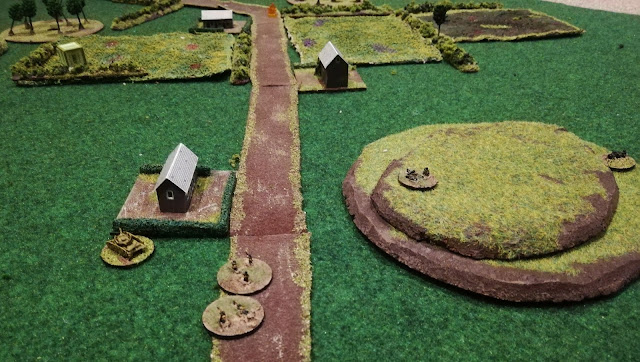 Another Panzer IV advances up to the farm building, in order to fire on the rifle squad in the hedgerow. However, it fails to spot them. 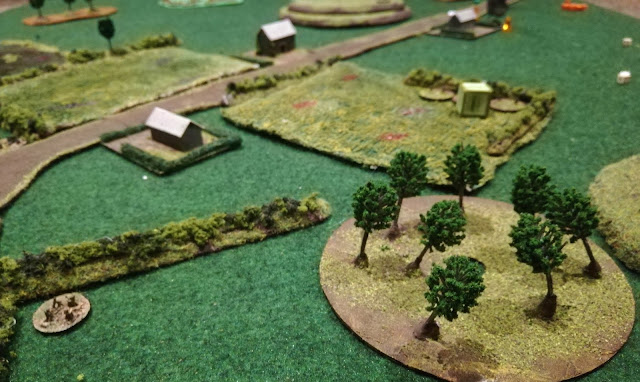 The US platoon commander orders a mortar strike on the German lines. The fire is unbelievably effective! 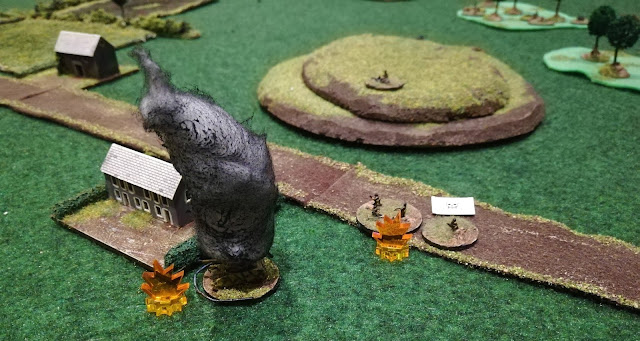 The grenadier squad on the road takes some casualties and the panzer IV brews up.

This felt weird for me. I got two shots, because the mortar has the Open Fire! move. I rolled 2 sixes, which means direct hits. The infantry then take a normal HE hit. The hit on the panzer is to be counted as a AP value 2 attack vs side armour. I needed to roll 8 or more on 2D6 and rolled 10. Panzer destroyed. I just struggled to accept that a mortar can kill a panzer IV.

Germans pull a chit: BR 20 now because they also need to pull a chit to unpin units. US BR 8. 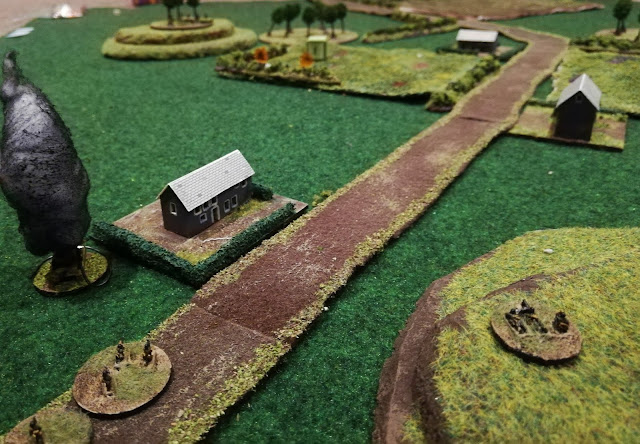 Turn 6: An MG34 team advances up the hill and opens fire on the infantry squad who have been sitting behind the hedge, ready for action. 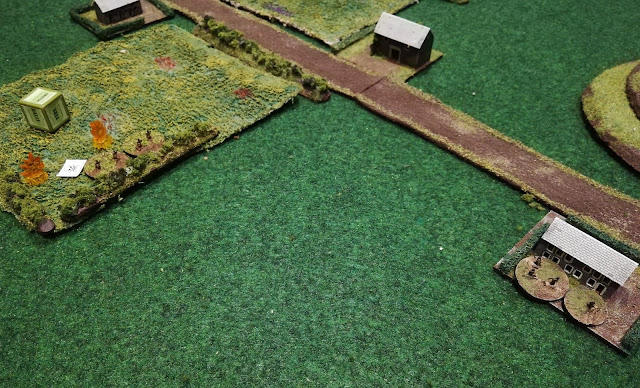 A grenadier squad manages to advance up to the farm house and opens fire on the US squad, wiping them out.

US commander pulls a chit: BR 12 in total now.

The panzer IV on the right flank fires HE at the BAR team on the US flank... 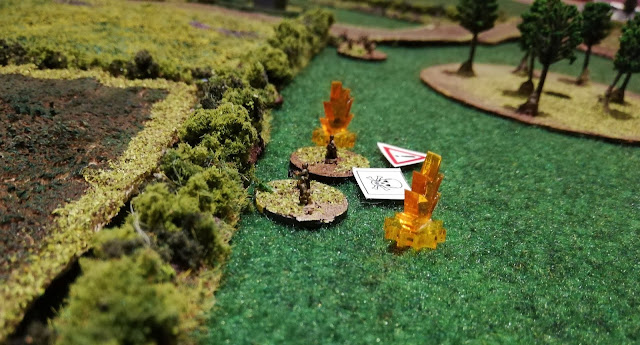 Two shots. The panzer IV gun has 4/4+ meaning you roll 4 dice and need 4+ to cause casualties. It is super effective. US commander pulls a chit: BR 15 now. 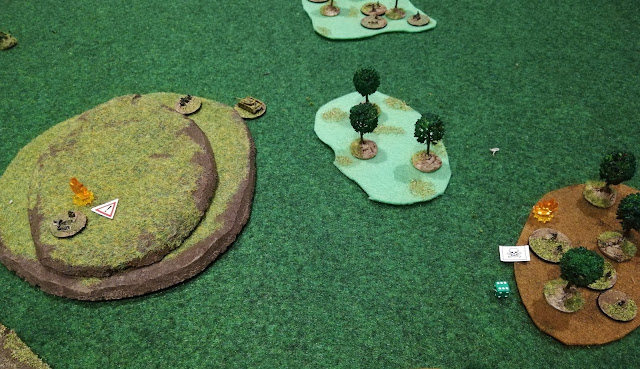 Another effective US mortar strike, pinning the MG34 team, and killing a couple of Gefreiter in the platoon command squad. They pass the morale test.

This is where the game ended. I feel like it was going to be a US victory because the Germans only needed 4 more to break, which can be one chit. Also with it being turn 6, the US main force was starting to enter and some Shermans were running up the road.

I took photos to store just in case I want to finish it later, but I would rather just play a new game.
Posted by James at 11:49 pm