Song of Blades and Heroes - first game ever

So I have owned these rules for ages and never played them. Maybe I should have gotten some 6mm fantasy miniatures and I could have been playing this loads, although I would probably have bought Dungeon Scum for this...and might as yet buy it. All of these miniatures are from the very first Reaper Bones kickstarter that I backed in 2012 and received in 2013. Seven years in the making this game then... 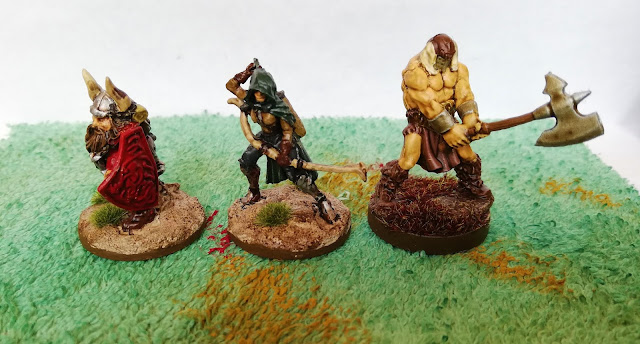 Our adventurers. Out to investigate an old ruin on the outskirts. Rumours of strange goings on brought these three together. 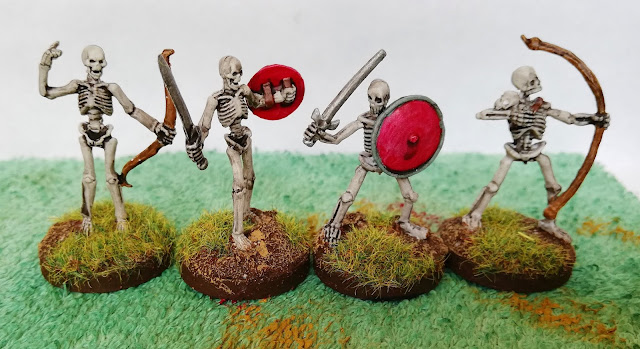 The strange goings on. Someone, or something has been reanimating ancient warriors. 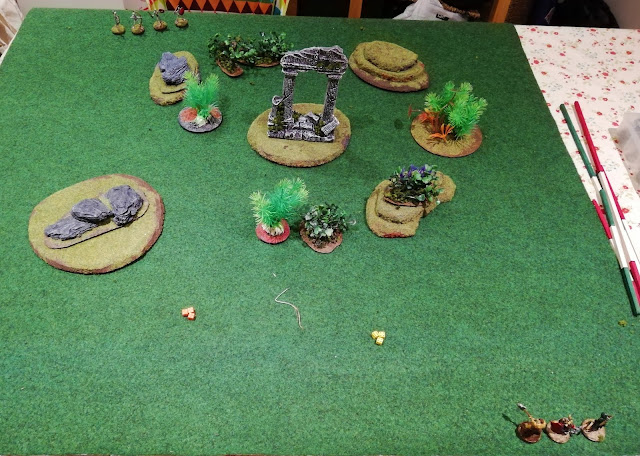 The ruin in the middle. Our adventurers are advancing. 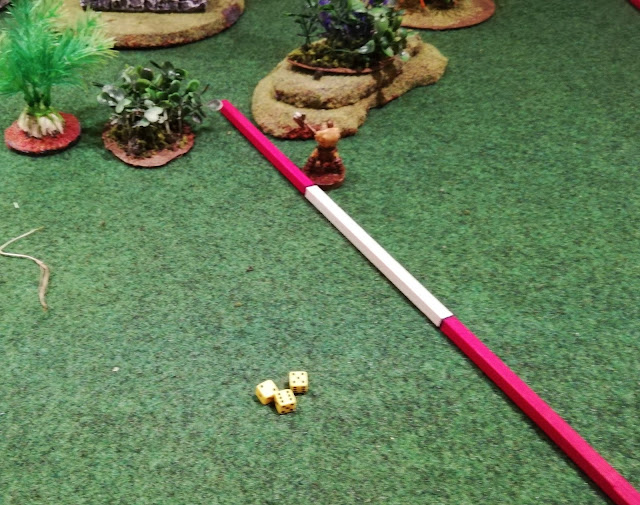 So each time you activate you can choose to roll against your figure's quality to make up to three actions. Here Barb the Barbarian passed two so can make two actions. Beware! If you fail two of those rolls then initiative passes to the enemy. Behold my measuring stick that is three medium lengths long. 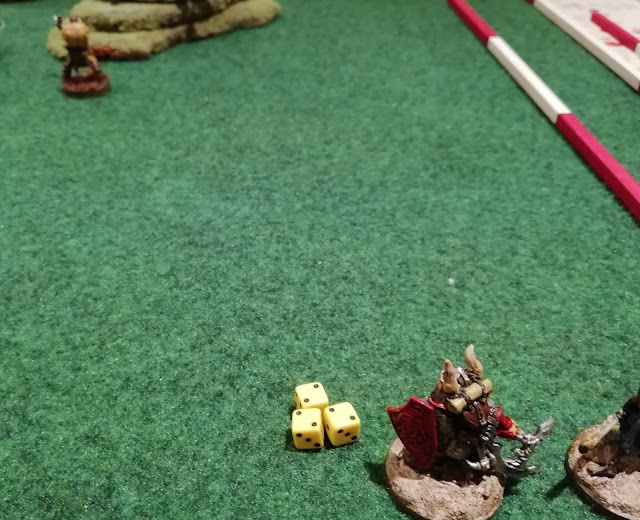 Darren the Dwarf fails all three. He needed 3+. Initiative passes over to the skeletons and my archer and Darren both get to do nothing. 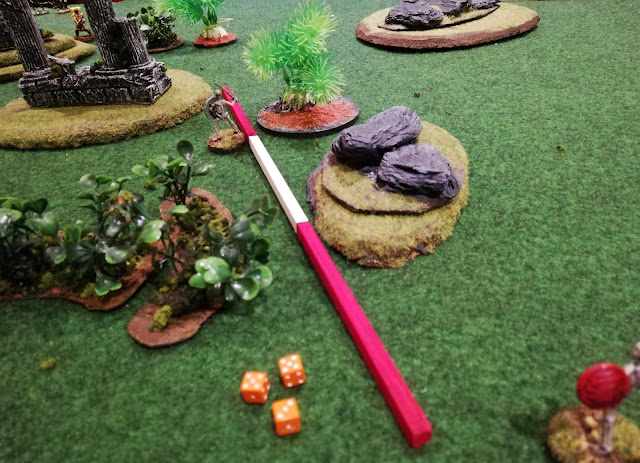 Simon Skeleton advances up twice, even though he could have taken three actions. Oops. 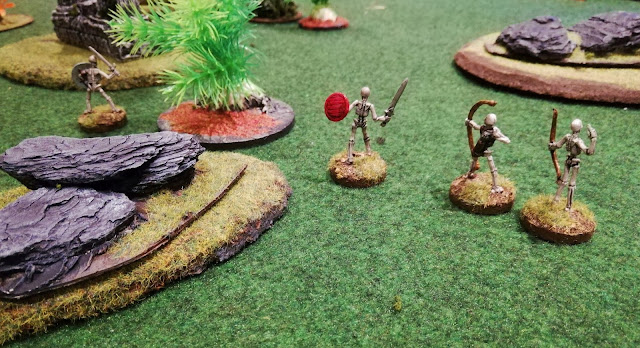 All the skeletons manage to advance up. 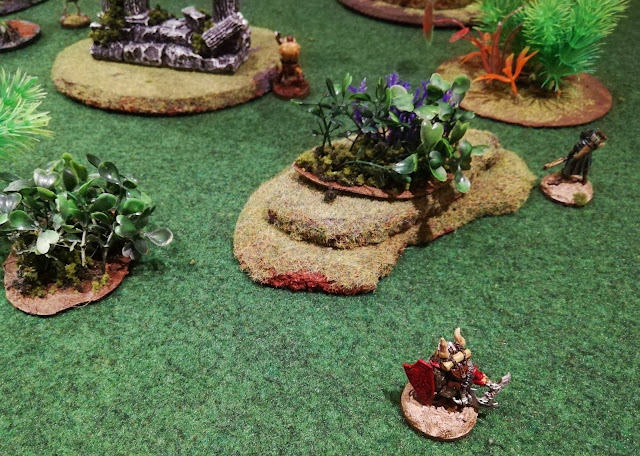 With all the skeletons activated, initiative passes over to the adventurers and all manage to advance. They all roll for three actions and pass either all three or at least two. 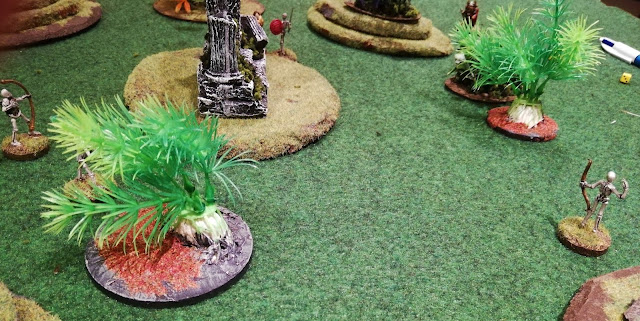 Skeleton archers take up flanking positions. Sam advances up to engage Barb. Simon fails to do anything. 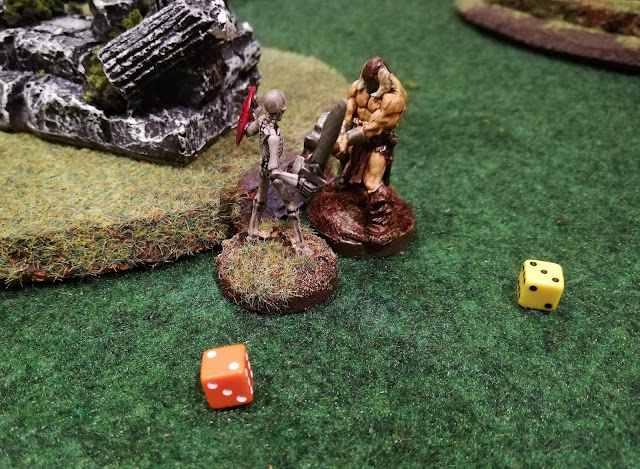 Barb and Sam start swinging at each other. Sam rolls 2, adds his combat score of 2 getting 4. Barb rolls 3 and adds combat score of 3 (6). He wins the combat. His total does not double Sam, so Sam is not dead. BUT because the number on the D6 is odd, Sam is forced back a base length. 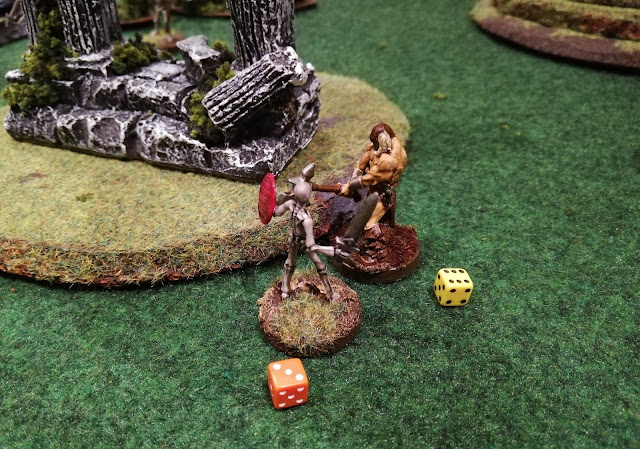 Barb uses an activation to close the gap and then attacks again. More than doubling Sam's score. Sam is dead. Again? Or was he really alive again? Either way, Sam is gone. 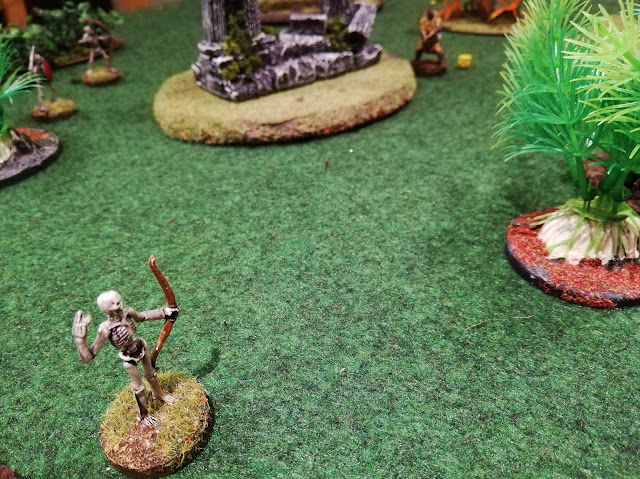 Sally looses a few arrows at Barb but misses wildly. Sam's "range" is Medium and Barb is 3x Medium away so Sally is shooting at -4. 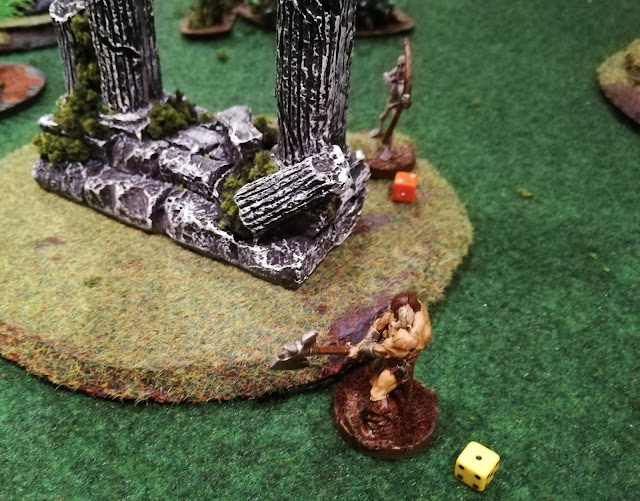 Same goes for Sarah. She at least manages to hit with a draw, but it does nothing, so may as well be a miss. Maybe it is? 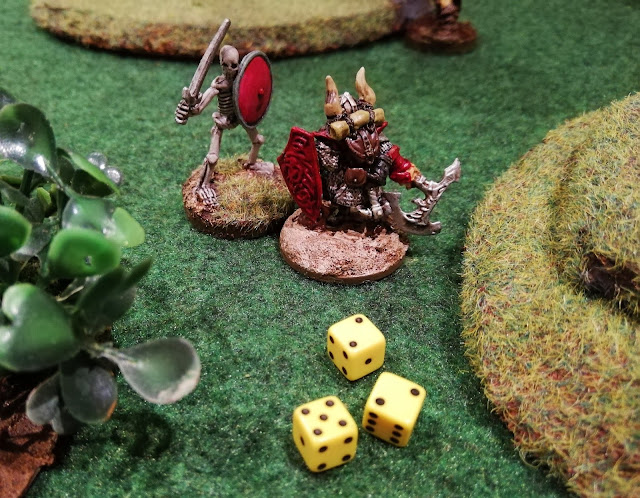 Simon engages Darren in melee, but used all actions to get there. Darren tries to activate and fails utterly. Initiative back to the skeletons. 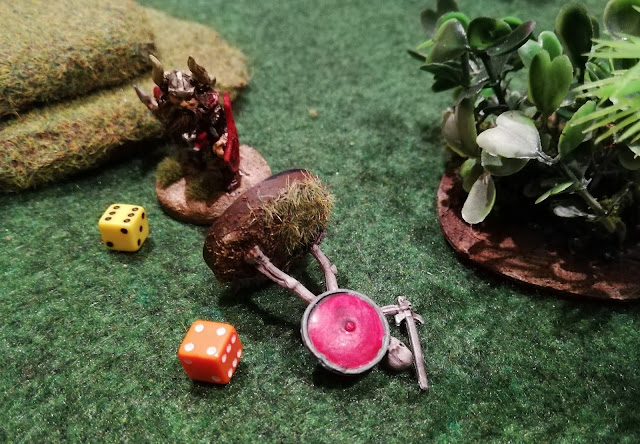 Simon swings at Darren. Darren gets the better of the exchange, knocking Simon down (even number on D6). 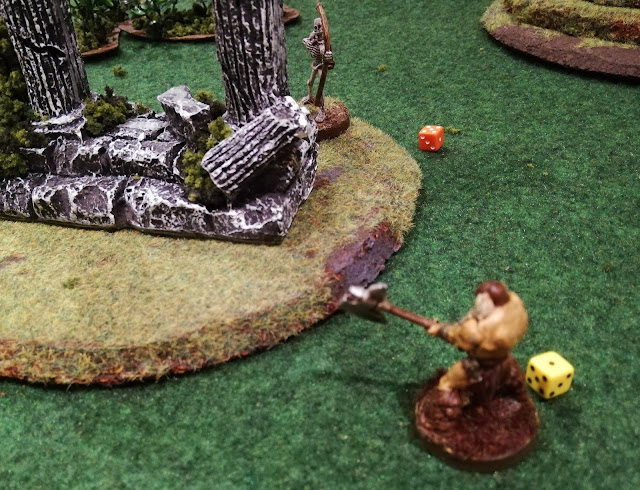 Sarah manages to convince Barb to recoil back with some pretty close arrows. 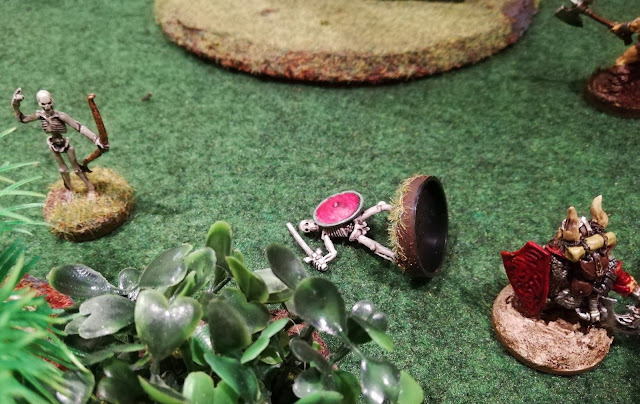 Sally looses some arrows at Darren, but does nothing. 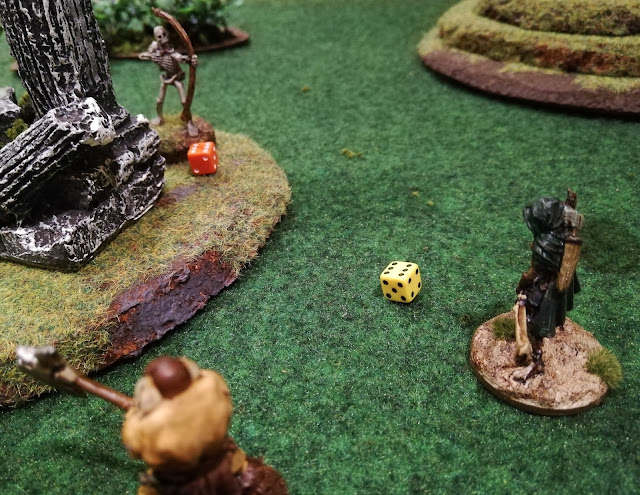 Andrea Archer gets herself into an utterly disappointing, pointless archery duel with Sarah. They both waste pretty much the rest of the battle fighting each other. Ranged attacks get -2 against skeletons, as they have the Undead ability. Why did she even bother coming? 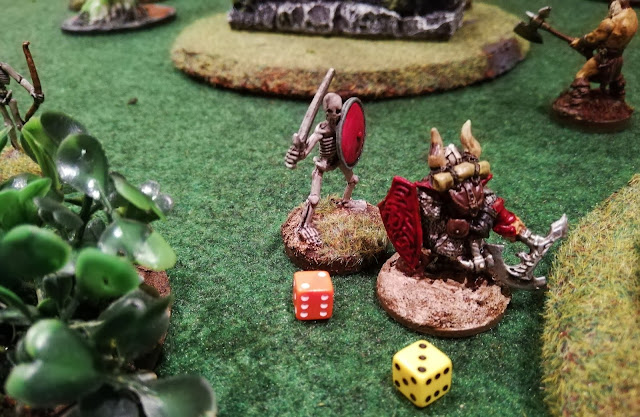 Darren and Simon have at it. 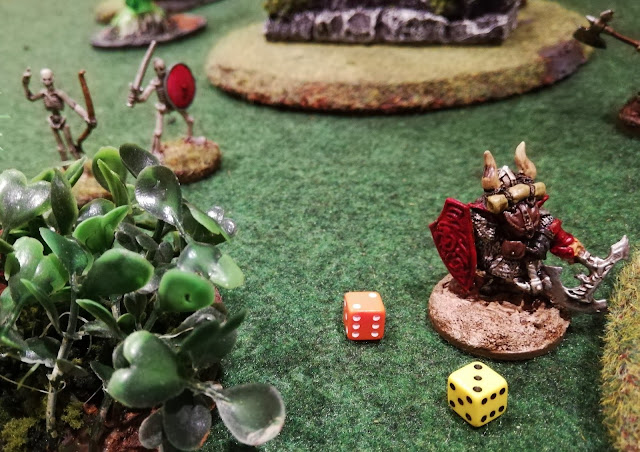 Simon gets beaten back and decides to withdraw a little to force Darren to advance through Sally's hail of arrows. 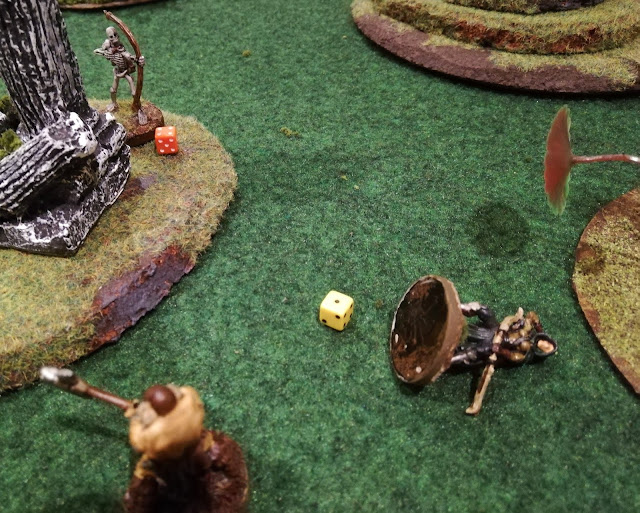 Sarah getting the better of the boring archery exchange right now. 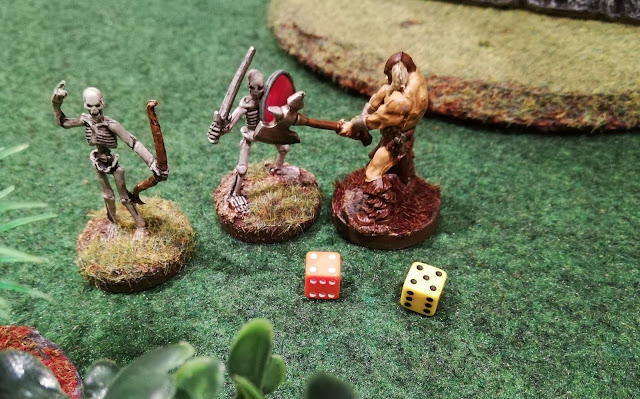 Barb runs over to Simon and Sally in order to end things. 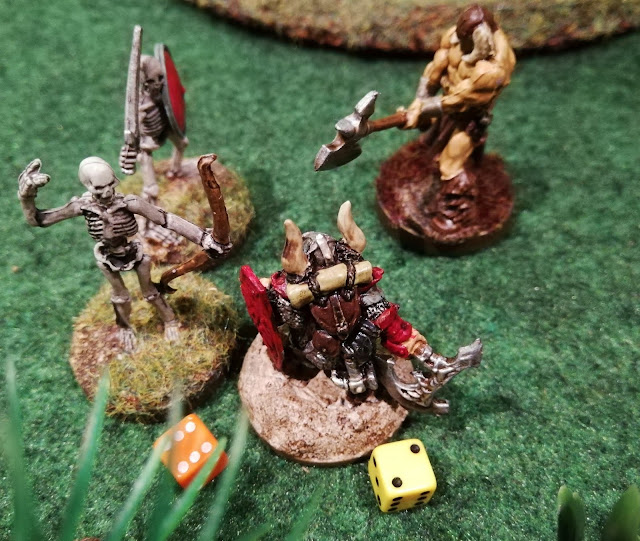 Darren runs over also and attempts to attack Sally. However, she manages to knock him down with her longbow. 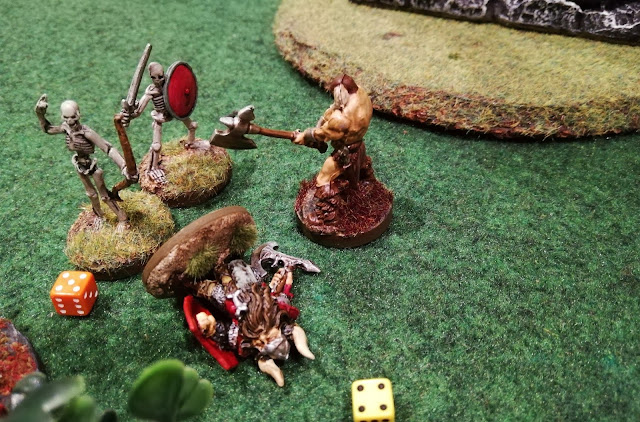 Sally has a blade...hidden in her... pocket? She manages to slip it between the folds of Darren's armour, wounding him badly. He is out of the fight.

I mean, I made up the wounded part, just in case these characters have legs and I want to do anything else with them. Sally doubled Darren's score so he is out of game. She got a +2 against him as well because he is a fallen enemy and she is in melee combat not ranged. 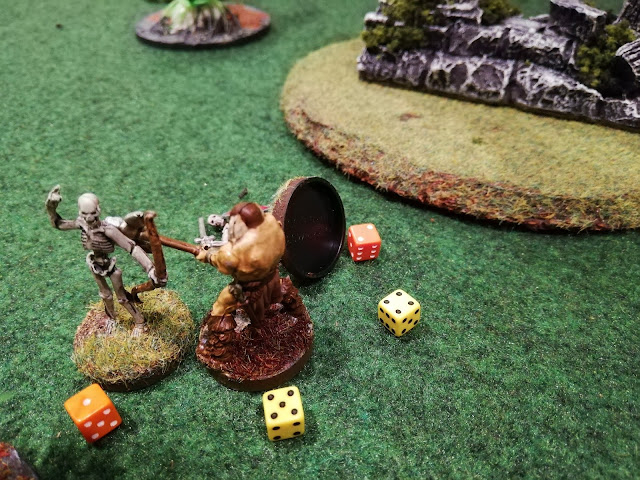 Barb full on beserks Simon and Sally, re-killing them both. He rolled three successful actions. Kill, move, kill. It was beautiful. 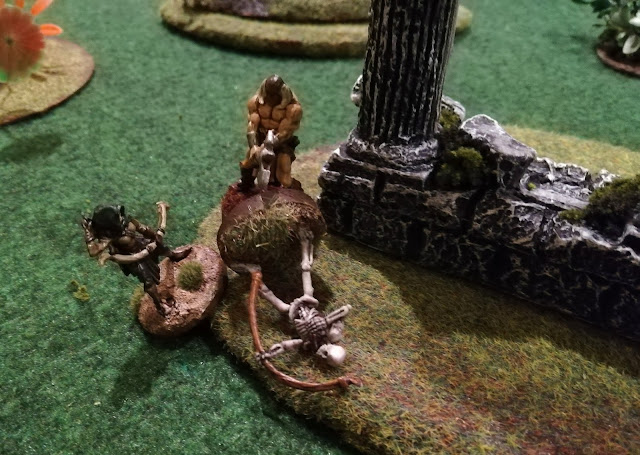 Between the previous photo and this one there have been about six rounds of failed activations because I kept rolling three each. However Barb and Andrea advance on Sarah and send her back to the grave.

It was looking dicey when Darren went down, and when it seemed like Andrea was dead weight with that -2 against her enemies. However, in melee her combat score is equal to her archery score so she is fine in melee. Although that seems odd to me. I might need to house rule it.

Fun game though. It was quick. Annoying about archery vs skeletons. But fun. I can see myself playing this more. My 5 year old showed interest in playing with my miniatures so I might teach her it, or something simpler.