First Battlegroup Game - Verdict: Why did I wait six years to play?

My wife ordered new wardrobes and while rearranging furniture in the bedroom my Battlegroup rule book appeared behind a chest of drawers. I knew I had lost it upon reading it on the toilet. Feverishly reading the rules over the past few days has enabled me to be ready to play. Tonight I did it.

I chose army lists from the Overlord supplement: 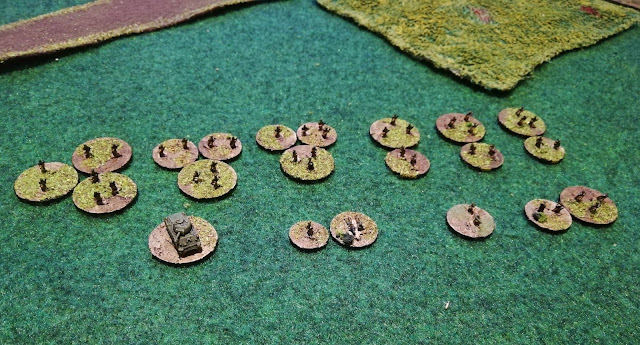 I upgraded them to regulars, but I was unclear about whether the upgrade only counts for the platoon itself or if it included the support weapons so I just upgraded everything. It came out at 182 points and had a Battle Rating of 18.

These were already regular. Battle Rating 16. 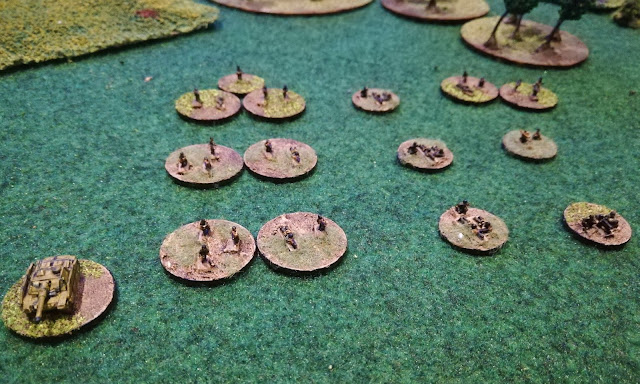 In Battlegroup there are various things that occur and you pull a Battle Token. This include a unit dying, an enemy taking over an objective, attempting to rally pinned units. These tokens have numbers on or other random events. If you pull enough tokens that the sum exceeds your Battle Rating then you lose the engagement.

Right: Let's see how it goes.

Scenario: Attack/Counterattack. The Amis have broken out of the bocage, finally. To try and stem the tide a Wehrmacht platoon is sent to fortify the village on the main road of advance. They might, however, be too late.The objectives are three: the centre hill, the large wooded stand, the house furthest from the right edge.

The Americans will enter from the bottom left. Germans top right. Scenario rules state that reece units enter on turn one, but there are none, so I just started. You can enter the board with 1D6 of units. Each turn you can add another 1D6 of units. Also at the beginning of each turn you roll 1D6 and then add the number of officers you have. You mad activate that number of units. Each side in this fight only has one officer so it will always be 1D6 +1. 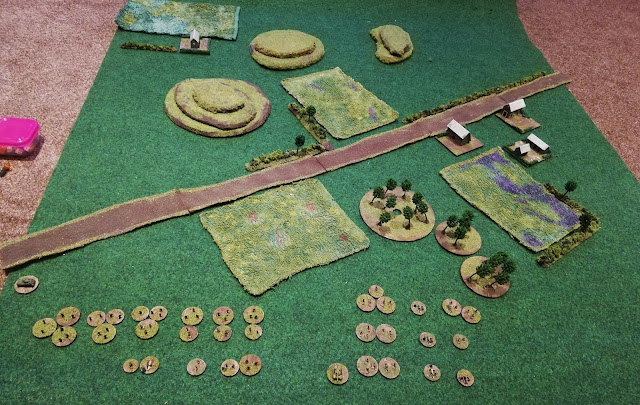 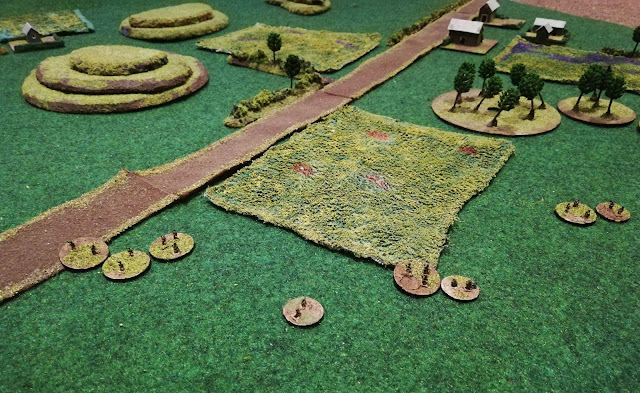 Turn 1: The Americans advance. A rifle squad rush up the left flank to secure the high ground, while the bazooka team heads for the hedge rows to fire along the road. The platoon commander and BAR team advance towards the woods.

I rolled 4 to allow 4 units onto the board. For my command roll I rolled 6 (plus an irrelevant 1 for having an officer). They all did a double movement as their activation. 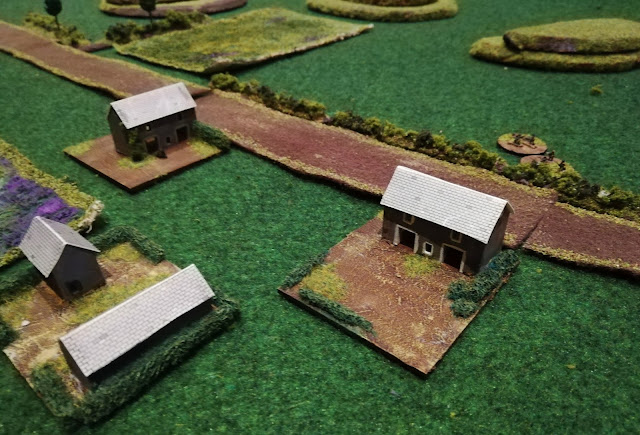 Rolled a 1 for units onto the board and there was no point in rolling a command roll as I can get a minimum of 2 (1 +1 for officer). 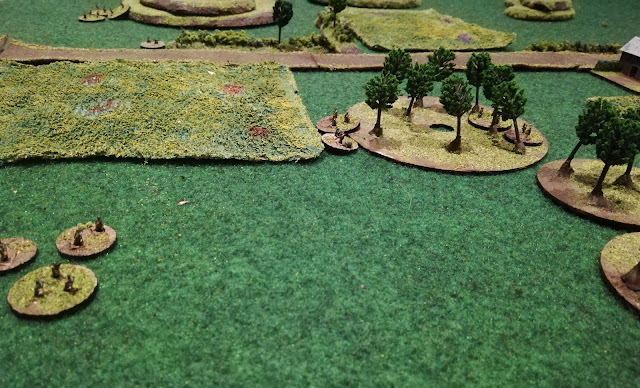 Turn 2: Another squad enters the fray for the Americans, and they all advance. On the right flank the BAR squad and platoon command make it to the woods and seek firing positions. 1 unit enters the board. 5+1 can activate. The Americans taking positions in the objective force the German side to pull a Battle Token: it is a number 3. 13 more and they break. 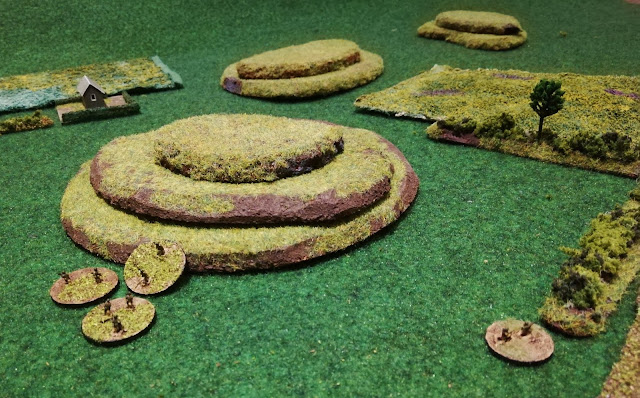 The bazooka team and rifle squad keep advancing up the left flank. 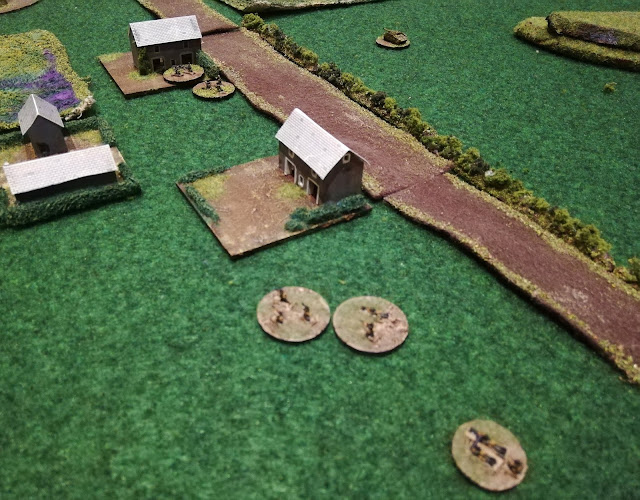 A large amount of the German platoon approach and are successfully able to follow orders. An MG34 team and rifle squad advance to secure the village. The platoon commander takes up position behind the house which is one of the objectives. A StuG IIIG rushes up the centre to try and find a position from which to fire on any infantry. 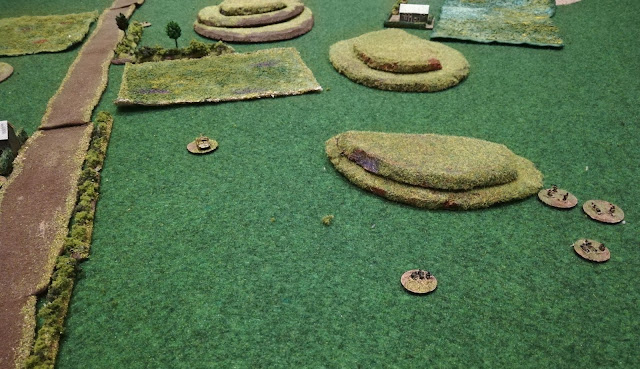 The StuG again and the German advance. A rifle squad and MG34 team advance around the hill. Another MG34 team, this time with a tripod mount advance in support.

6 units entered the board and 6(+1) were able to activate. This was a strong round for the Germans. But am I burning through too many good dice rolls too soon? The German platoon commander taking the objective forces the US commander to pull a Battle Token. It was a mine strike to be played against enemy armour.

Suddenly the StuG hits an unexpected landmine, but luckily the blast is ineffective and does little more than rattle the crew a little. 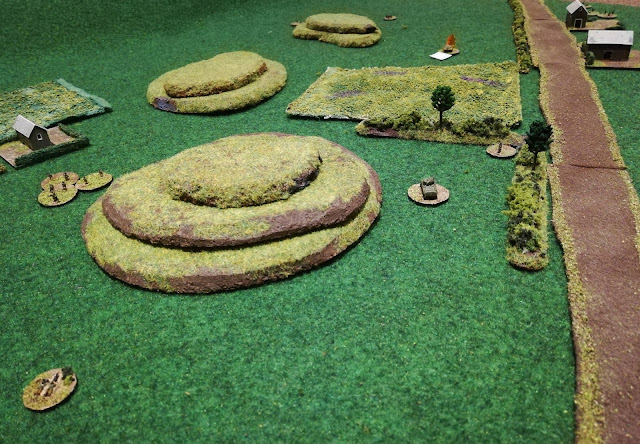 Turn 3: The Sherman makes an appearance and advances up towards the hedgerow from which to fire at enemy armour. Infantry get into positions, such as the bazooka team, nestling in against the hedge. 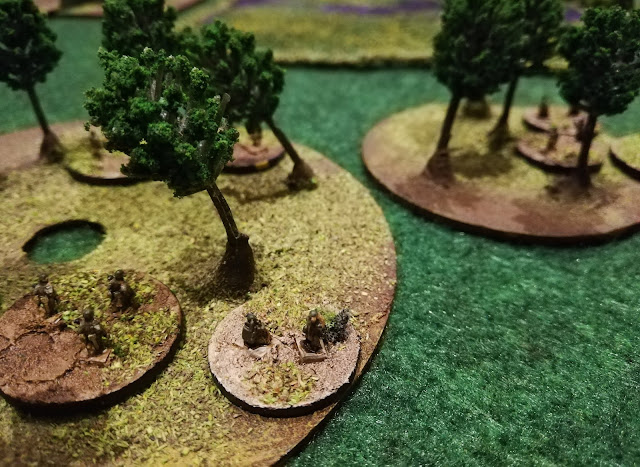 The infantry secure positions in the woods from which to fire on the village. The rifle squad lay down some ineffectual fire at long range.

I attempted some area fire. 1D6 to hit. 1D6 defender cover save. If they fail the save then the unit is pinned - cannot be ordered to do anything. In the "rally" phase at the end of the turn the commander pulls a Battle Token and rolls a D6 to see how many units it can unpin. 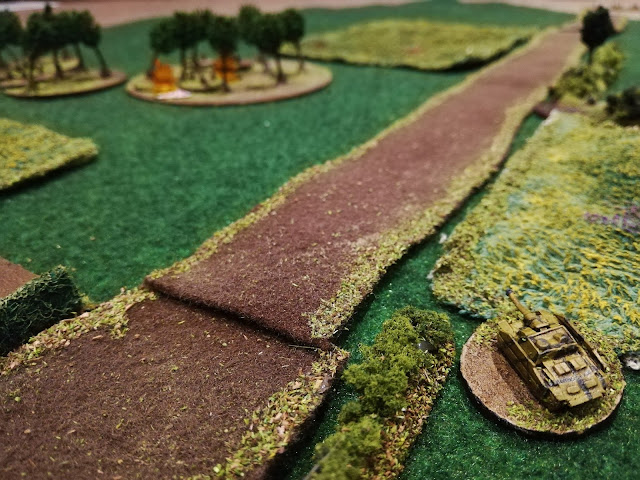 The StuG advances to lay down fire against the infantry in the woods. A squad is successfully pinned but no casualties suffered.

Area fire apparently rarely causes casualties. The idea is it forces the commander to pull Battle Tokens to unpin them and crawl further towards their breaking point. 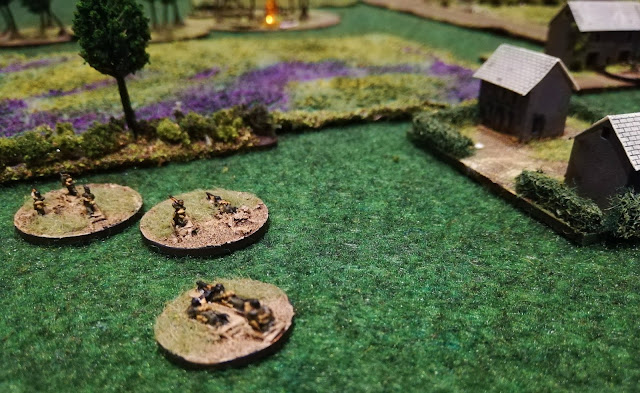 On the German left flank an infantry squad and MG34 advance up to the hedge... 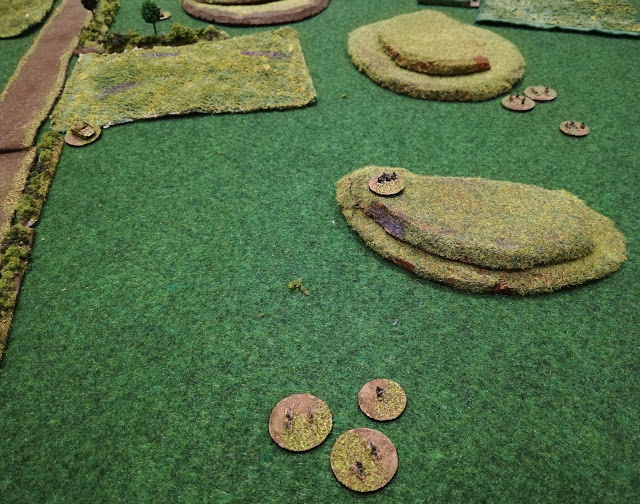 ...while the MG34 team take up firing positions on top of the hill. Infantry advances along this flank also.

All German units are now on the board and 7 can be ordered to move. At the end of turn 3 the Germans have 3 towards their BR of 16. The Americans are still on 0, because their Battle Token was the Mine Strike token. 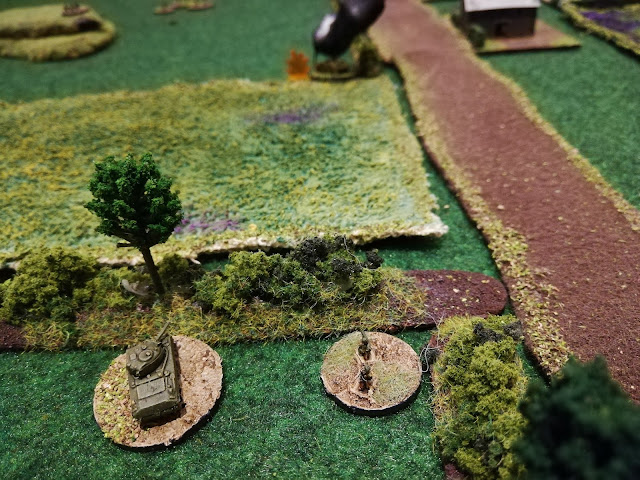 Turn 4: To tackle the StuG the Sherman advances to the hedgerow to lay down some fire. It scores a direct hit brewing up the vehicle and killing the crew in the process as ammunition begin to cook off inside. 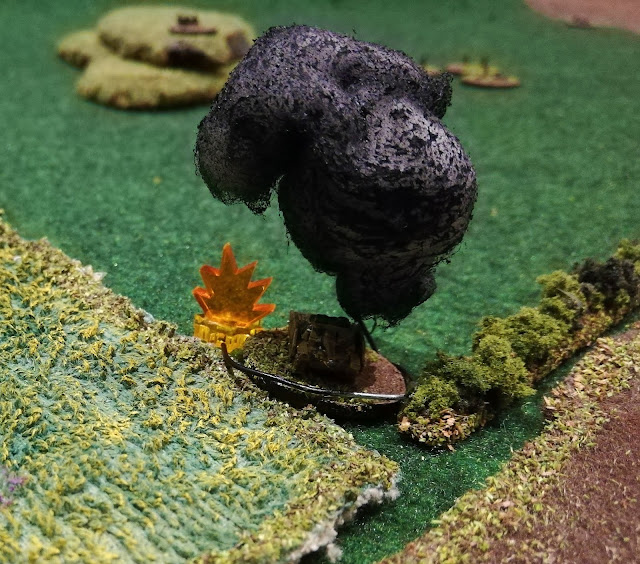 A large plume of black smoke marks the death pyre of the StuG and its' crew.

I am quite pleased with the smoke marker, although it was a pain to make and paint properly. Aimed AP fire is pretty easy to resolve, you just need to know what your gun is and what their armour is. It reminds me of the AP fire in the old Airfix Guide WW2 rules. The destruction of this vehicle forces the pulling of another Battle Token. It was an Airstrike token, but the Germans fail to successfully call it in. 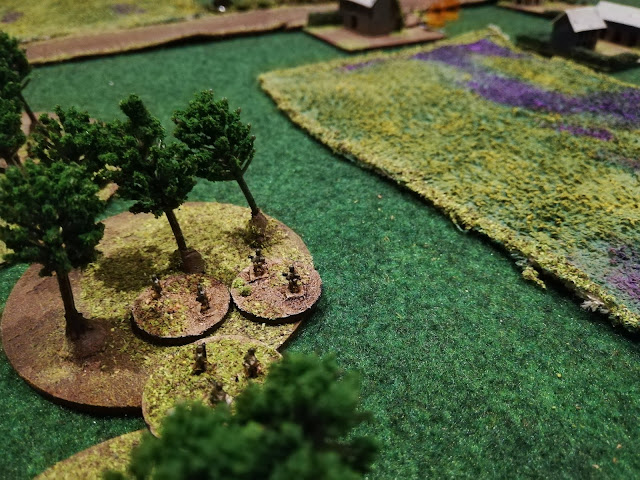 Riflemen in the woods open fire on the German platoon commander pinning him. 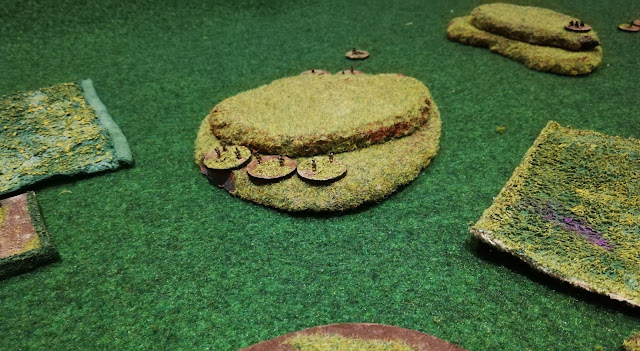 US infantry advance up the hill, securing the objective for now.

This forces another token on the Germans. They are up to 5/16. 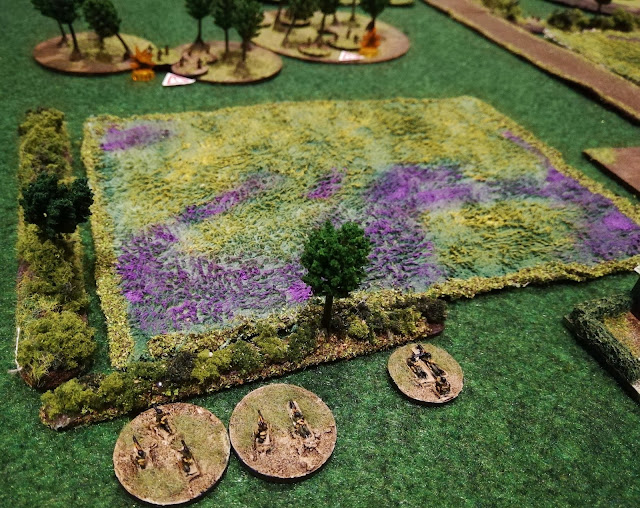 German infantry open fire on the Americans in the woods pinning two squads. This may prove costly with morale overall.

The US will have to pull a Battle Token at the end of their next turn to un-pin these guys. 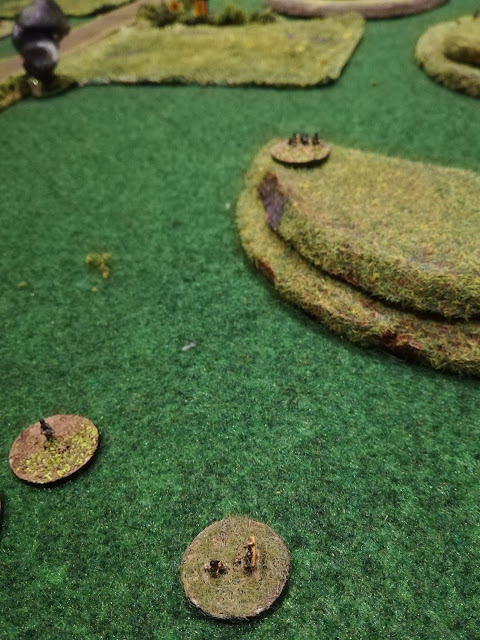 To tackle the Sherman the Panzerschrek team advances. At the same time the MG34 team opens fire on the bazooka team in an attempt to avenge the burning StuG. 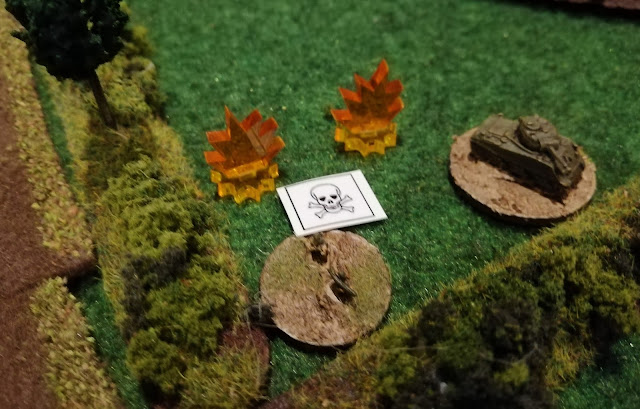 The bazooka team dive for cover but to no avail. They fall in a hail of bullets.

This was aimed fire. Fire to inflict casualties. I figured with the small figure count of this team, getting caught by the MG34 would be deadly. I was right. This death forced the pulling of a Battle Token.

The US and Germans had to pull a Battle Token each to unpin units this turn. Or will have to next turn. The Germans are up at 9/16. US are at 5/18. 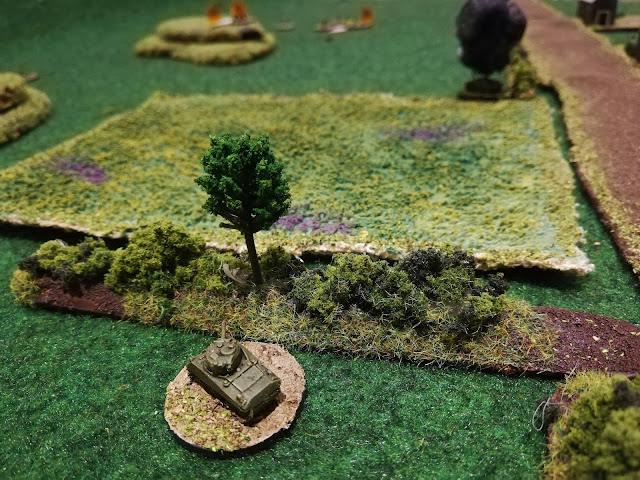 Turn 5: The Sherman opens fire on the German infantry using its HE rounds. This is to support the advancing infantry who are hoping to secure the left flank. 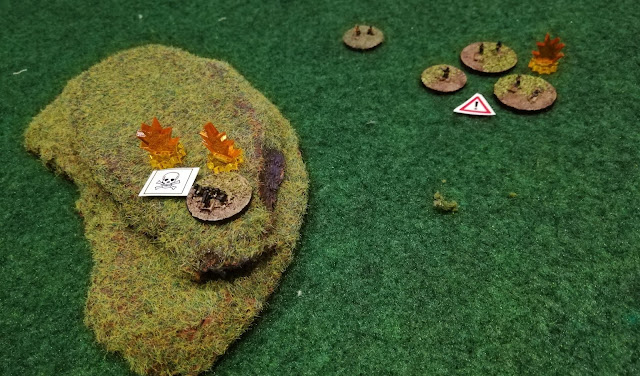 The fire is effective! The MG34 team is wiped out and the advancing infantry are pinned out in the open.

The death of the MG team forces the pulling of a Battle Token. It is high. They are up to 13/16. Close to their breaking point. 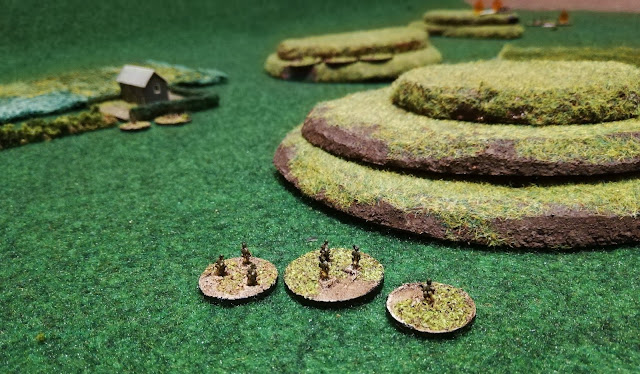 US infantry rush up to secure the hill and support the squad already sheltering in the lee of the central hill. 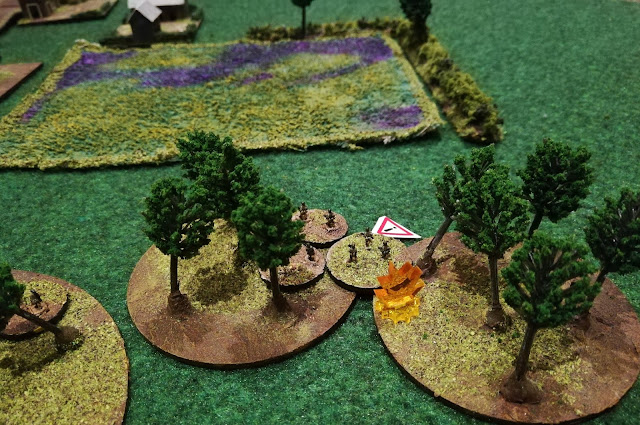 US infantry in the woods take fire from the infantry over the hedge, but as the Germans spot movements in the woods, and as the platoon commander gets reports of infantry flooding towards their weakened other flank he decides to pull back and regroup further up the road. Hopefully soon enough resources can be pulled together to stop the US advance. 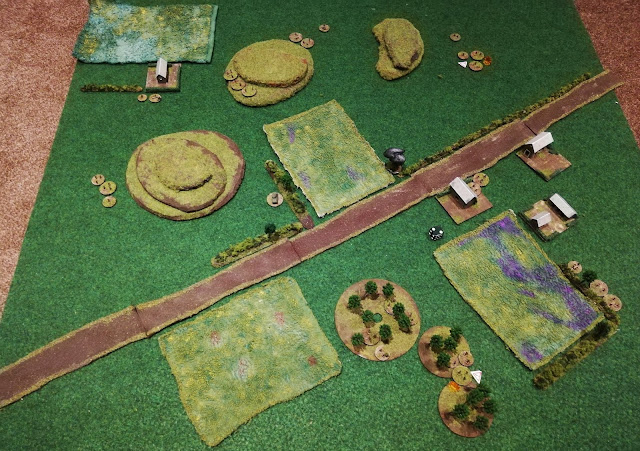 This is how it all looked at the end. 3 units killed. Multiple pins that force Battle Token pulls. In all, I like what I have seen so far. Next game I will try and get some mortars in the mix, maybe some off board HE fire also.

I recommend. This is a 3x3 table so I didn't in any way edit the distances. I had thought to reduce inches to centimetres but didn't need to based on the small size of the forces.