My efforts to make the Achilles look presentable are slowly moving along. I decided to put some bed rolls, or rolls of stuff hanging from the sides. This helps cover some of the bare surfaces. This is the second tank I have tried this on. The other is a Sherman that hasn't been posted up here yet.

I made the long one on the hull first. You can see remnants of my indecision about where to put the straps. It is unfortunate, but I hope paint will cover it, or I might use some filler to hide it better. These rolls started off as sausages of green stuff. I then flatten the ends by tapping them on my desk, and attach them onto the surface I want them on. Next comes the sculpting. I used the back edge of a craft knife to make the strap marks. I just roll the knife around the sausage a couple of times, and press gently in. 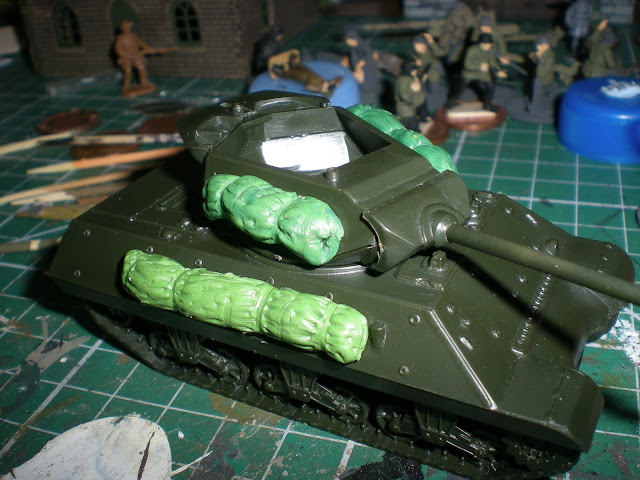 The other indentations are created by using a cocktail stick, the pointed end facing the strap marks. I then do a few more dotted around the sausage to try and make it look natural. 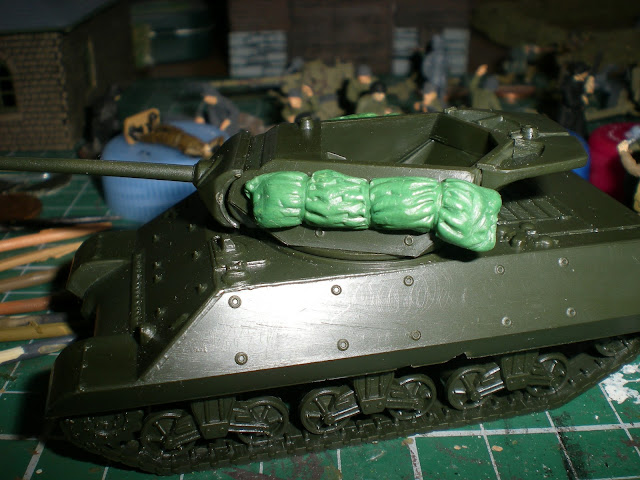 I stick the end of the cocktail sticks into the ends of the sausage, and work it so there is a circle hole. I then squeeze it back together, leaving the hole visible, making it look like it is actually a roll of something. 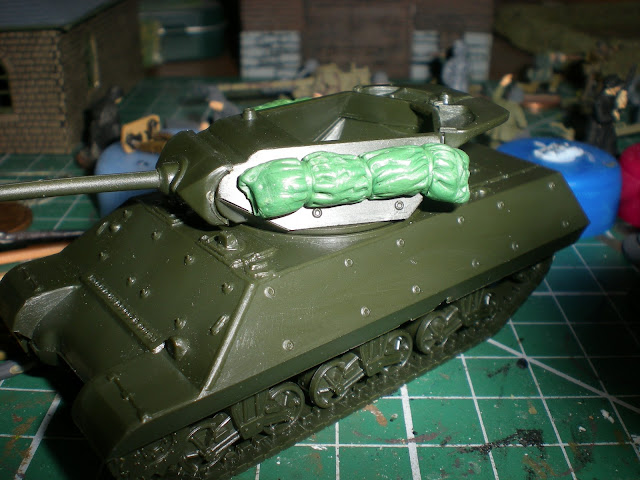 We will see how they look when I get around to painting it all up. More stowage will follow. I am trying to work out what to use as shells to fit to the back of the turret. My only thought right now is of possibly using the ends of cocktail sticks.

Here is my attempt on the first Achilles. Excuse the shoddy knife-work. I did this before reading an article where a proper circular drill was used. I wish I had such a drill, instead of chipping away for hours with a knife.

The turret needed the middle part, so I could attach the turret to the hull. I cut away as much as I dared. Should be able to fit two men in there. 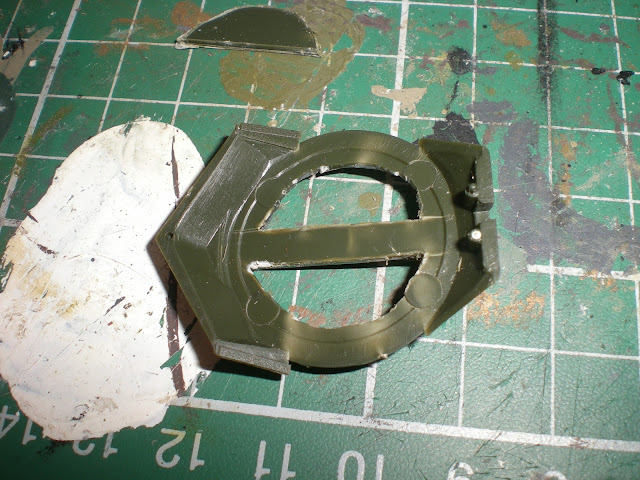 I didn't want a matching bar across the hull. It would limit the turret traverse by getting stuck on the legs of the crew. This way I think I have managed to find a way where the legs won't get in the way as much, and I can traverse the turret between 90 and 180 degrees. 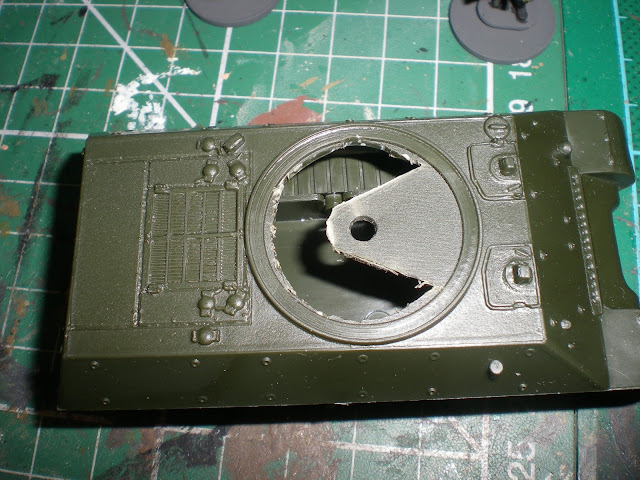 This is how it looks together. I am tempted to take more off the hull. 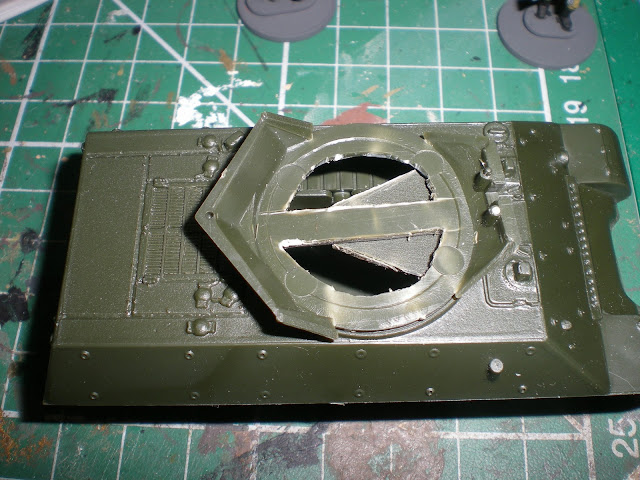 I asked for the Saturday off in order to come to Salute. My request was accepted. I then proceeded to plan out how best to do it. I didn't feel like driving into London on the Marathon weekend, nor did I really want to get the train... I could have driven, and parked at my brother's house, very close to the ExCel centre, but again, the London Marathon kept scaring me from doing that.

I then discovered that on Friday night, the Farnborough Wargames club meets. I have friends in that city, so thought I could attend the club, stay over, and get the train in from closer, thus being cheaper. The problem was, to avoid parking at the station, I would need a lift. My lift would then be travelling to Watford for a performance of a show, and couldn't get me back to my car. It was all a bit of a pa lava (I have never had to write that word before...). I ended up just driving with my friend into Watford, and using public transport to travel right across London, and back again to get to her show. This meant I didn't arrive at Salute until about 2pm, afraid that I had lost my chance at filling my shopping list. To be fair, it was only a short shopping list (PSC Russian and German infantry support weapon sets).

I arrived and was handed a bag. A quick glance showed a magazine, and I thought nothing more of it. I went on to shop and admire the games going on. I lingered a little bit at the Battlegroup Overlord beach game, and admired the other Battlegroup board. I couldn't bring myself to buy the rules though, as I play barely enough as it is.

In the end, this was my final haul: 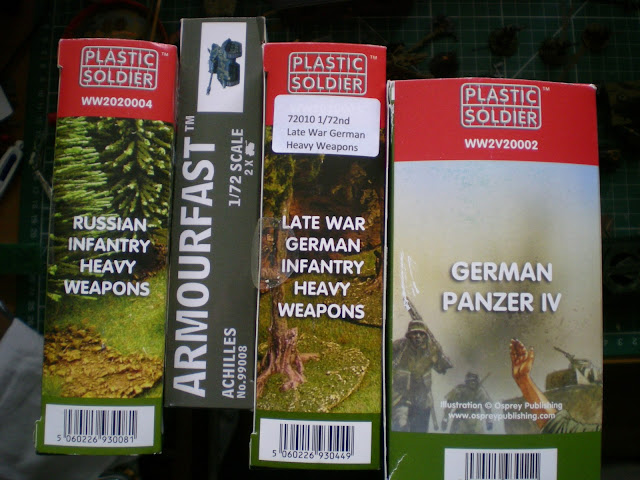 I only have one Panzer IV, so thought I would bulk up my numbers. I also have no Allied tank destroyers, so got some Achilles to go with my Brits. I will need a lot of stowage to bring these Armourfast kits to life though, and, inspired by another modeller's blog, I will be cutting out the bottom of the turret as much as I can (read: dare) in an effort to make them look better too.

Upon arrival home (Sunday night) I unpacked all of my gear, and tipped out the Salute bag. To my surprise, a sprue fell out with the Salute figure (I thought it was awarded to pre-ordered tickets only) and a die. I love dice: collect them even, so the more special edition dice I get my hands on, the better. This one will be kept with my collection of Gencon 2012 dice.
Posted by James at 12:02 pm 3 comments:

I have been working on some British Support Weapons. I don't want to be fielding infantry squads who are required to just charge into the Hun with no mortars or anti tank support. I dug out my old Revell British Infantry and took out all of the PIAT, 2 inch mortar, and bren teams. I washed them in a bowl of water and washing up liquid, and then proceeded to paint them.

I now have three PIAT teams, three mortar teams, and I think four bren teams on the move, with a couple firing. I took photos of a couple, but need to find a better place to take photographs. 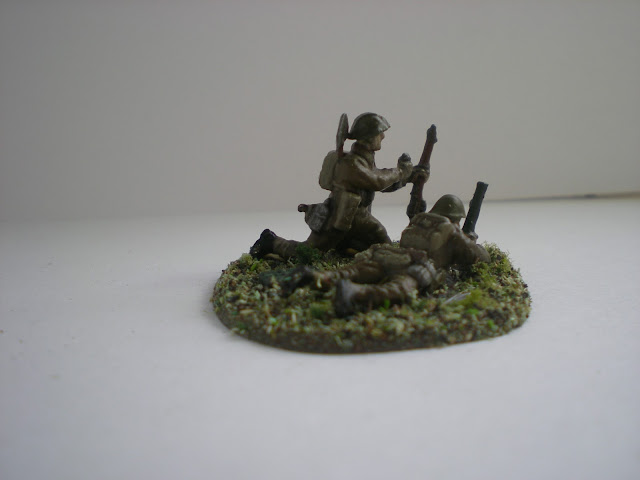 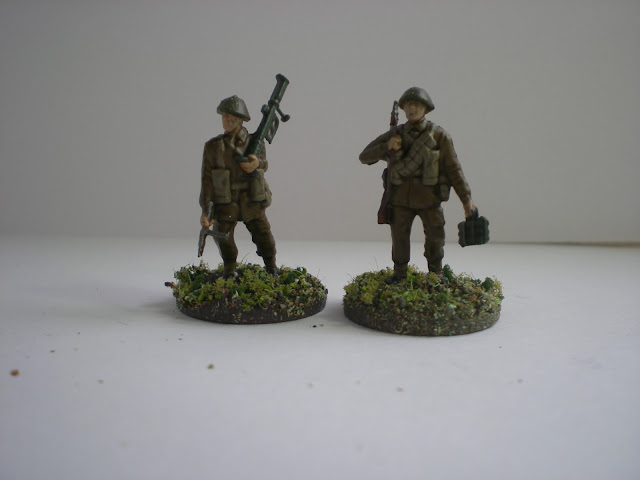 Yes, sometimes I even play games.

So it finally happened! After months of preparation, modelling, painting, basing, I managed to find a free evening to shamble along to a games night for a Bolt Action engagement. I have the rules. The book is a nice looking thing, and the rules seem simple enough, but also not too simple. I met a bunch of new, interesting people, and had a laugh. Ironically, we used someone else's 28mm armies, so I didn't even get to take my guys for a spin. It was probably for the best though, as I don't have a very good array of support weapons.

It was a four player game, 1400pts, playing an ultimate destruction scenario (is that its name?). The Germans had an SS platoon of small squads, supported by an MG42, medium mortar, a 75mm infantry gun, Hanomag, and a Panzer IV. There was also a Wehrmacht platoon of large squads, a Pak 40, and Puma. The allies consisted of a regular US platoon, 2 large squads, bazooka team, medium mortar, 50cal, halftrack, and an M4 Sherman. They also had a British Para platoon of smaller squads, a 6pdr, a useless jeep, and sniper. I played as the US.

I didn't get many pictures. I didn't want to be the new guy who was going around taking photos every five minutes. What photos I did take, were taken on my phone, and as such aren't great.

I advanced my less experienced force into the town, in an attempt to get the added defensive bonuses from being in buildings. It didn't really achieve much, and I ended up spending most of the game just camping here, taking long range shots. 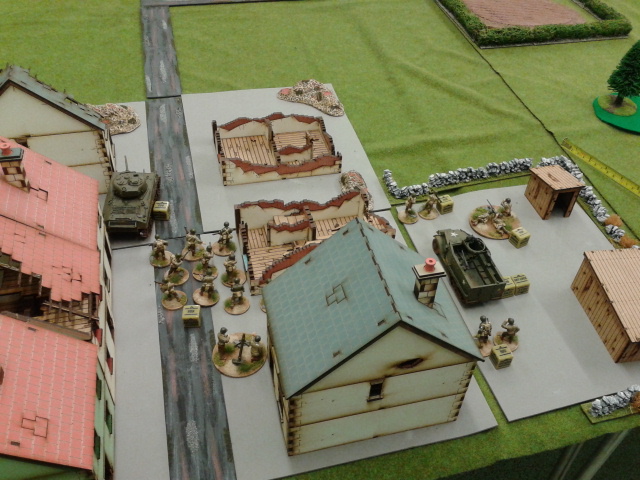 The Brits took up the right flank, getting the 6pdr into position in the field. It stayed there all game waiting for the puma to make an appearance. The sniper (in the bottom corner) set up in that wooded area, proving to be totally useless, all game. 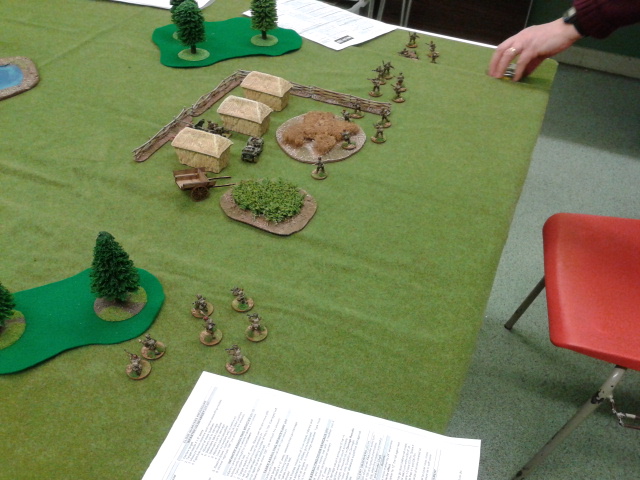 This blurry shot shows most of the German forces. SS on the right flank, Wehrmacht partially visible on the left. Puma and other infantry are out of shot. 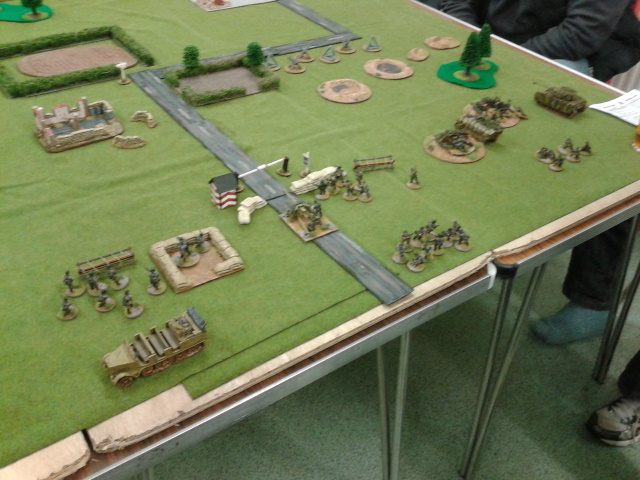 Early on my Sherman lights up the advancing Hanomag, causing massive damage and brewing her up. This put the allies up one point for destroying an enemy unit. 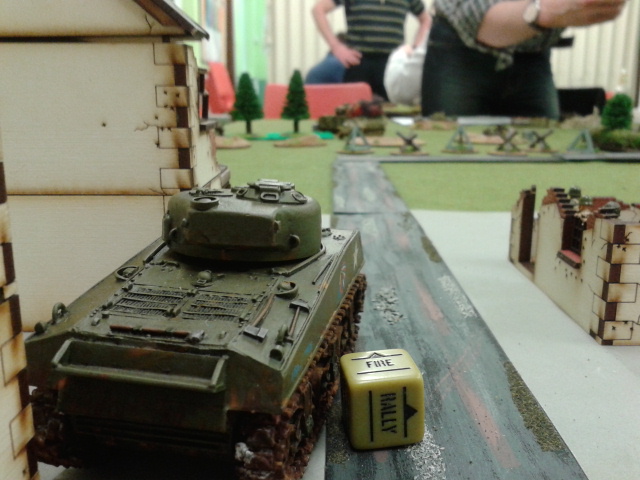 Unfortunately the Hanomag wreck provided hard cover for the Panzer IV, so he just parked there for the rest of the game missing his shots at the Sherman. 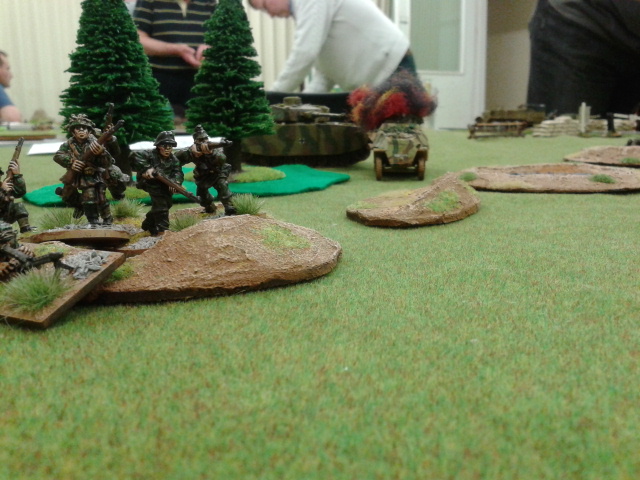 I set up an infantry squad in this building and they managed to cover the field in the middle of the board. But they couldn't hit much until the very last round. I think they scored a couple of pins is all. 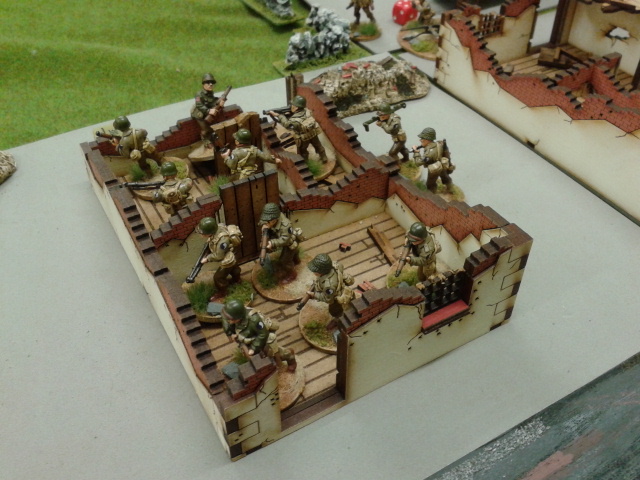 I eventually charged my Sherman out to get a better shot at the Panzer IV, scoring a hit, but the crew managed to put the fire out. Here you can see the Sherman clearly in the sights of the Panzer IV.... 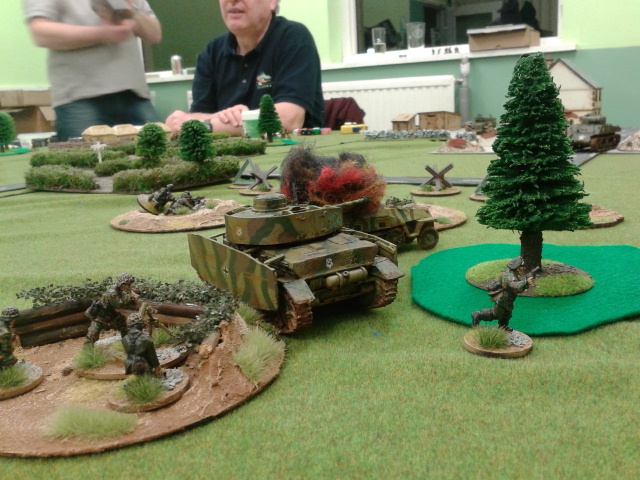 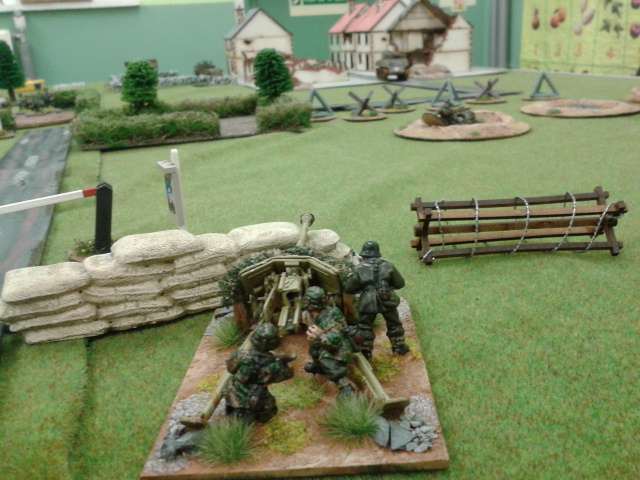 The game ended before she could die though. Below shows the beleaguered Wehrmacht squad in the middle of the board who took fire from all directions in the last round of play. More pin markers than men! This is also the field where a close combat took place. Because the SS squad was attacking the paras through the hedge, both attacked at the same time, wiping each other out. I don't know if that was correct, but we were all very new at this, and the rulebooks rarely left out hands (we had about five copies between us). The game ended with an allied "victory" because we had wiped out two units, and the axis had only wiped out one. 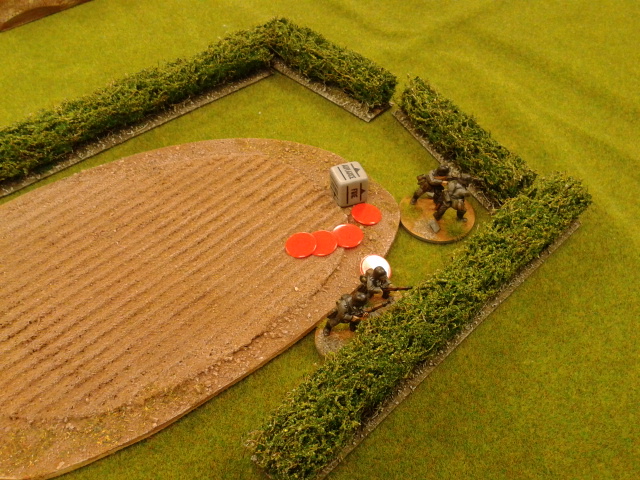 We undoubtedly did things wrong. But it was a fun game. My next one will hopefully be on a much smaller scale, perhaps just a few infantry squads to get a feel for it first. I also doubt I will be playing a destruction scenario again. It just encouraged us to sit in cover and camp.

I really liked the indirect fire mechanism. We didn't score many hits (one in total!) but with the likelihood of hitting the target getting better each round, it meant you couldn't just camp a unit somewhere and hope it survived. My HMG team was almost constantly on the move because the German artillery was following it around. They had no spotter though, so we may have been playing that wrong.

As I get more experienced with this game, and build forces myself, I will be able to give better reports and next time I hope to have a better camera, and my own figures on the board!
Posted by James at 12:19 am 2 comments:

Jagdpanther, the first of a million (okay, four, but still...)

This puppy has been sitting on my desk for ages just waiting to be finished off. I still think it is a bit too clean, and may do some more work on that. I had to add a track link into the left hand tracks. The same mistake won't be happening on the other ones I build. 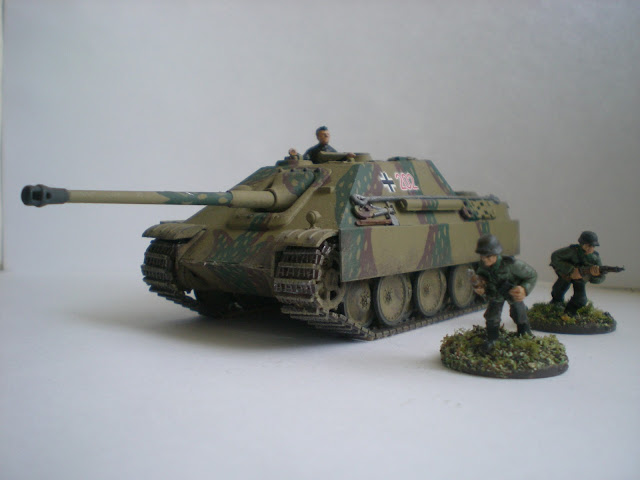 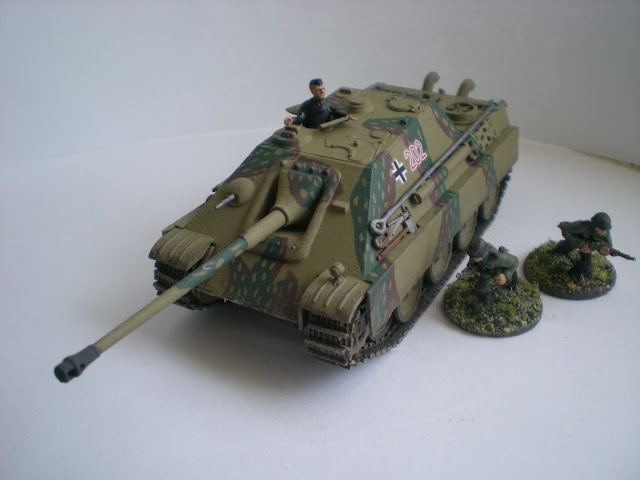 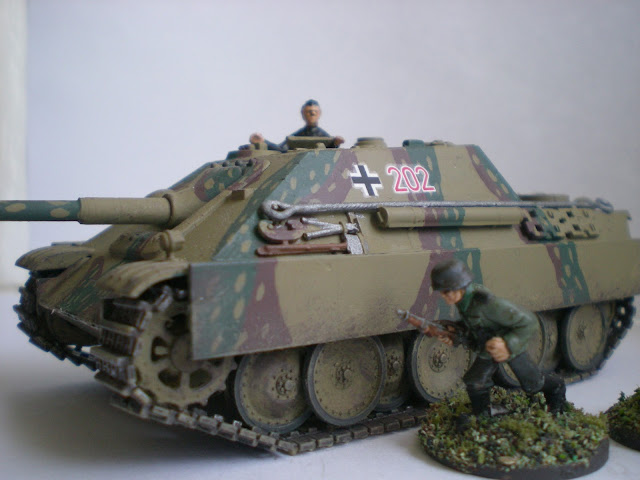