Many Blogs do this at the end of each year. I look back to mine from last year and see how I missed out a section and had hopes and dreams that never materialised. So here goes, in no particular order:

PC gaming
I never finished Xcom. I nearly finished it, and meant to complete it, but haven't loaded it since March/April. I bought Northgard and played it a couple of times, but again nothing since February. I bought Starcraft 2 Legacy of the Void in n attempt to complete the narrative of that game. I completed a few missions over the summer holidays and haven't touched it since.  Worst of all, I bought Galactic Civilisations 3, having loved the 2nd one. I do not know when I will ever have the time to play that game. It is not something you can drop in and out of. It is also only playable on my gaming rig, which requires me to sit in my dining room, alone. Not what I want to do. Skyrim? I enjoyed it for a few weeks back at the beginning of the year,  but again haven't touched it since. All in all, I feel like I am at a stage in life where gaming is not a prime concern. I should sell my rig and upgrade my laptop for the odd game on the sofa.

6mm WW2
This project has completely stalled. I based a squad of each nation but the rest remains unfinished. I feel as though I have neither the time or terrain to want to move further along. But at the s me time, WW2 is my first love, and I want to take my Battlegroup rules for at spin finally, or A Sergeant's War, or Bolt Action, or Flying Lead. My brother is building a 15mm WW2 collection with which to play Flames of War, so this has inspired me slightly. I own a handful of buildings that I can finish, but again I can't be bothered.

20mm WW2
This is being mentioned only because I brought some miniatures out to use for a stop motion film as an example for my students. I made a 6 second video of an Airfix jeep driving along. Not super interesting. This project will stay shut down until I have a larger house, or a dedicated wargaming club to attend.

6mm Sci Fi
This is where all the action is. Admittedly I have had only 4 games this year, 3 of Horizon Wars and one of Starport Scum, but I have had breakthroughs with terrain, figure basing and the further development of the Tranquil Stars universe.

I am very excited about Horizon Wars.  After purchasing Laserstorm for my after school club, I will probably end up starting them off with Horizon Wars because I still don't have enough miniatures to form larger armies. I also have a narrative I want to stick with for a little while, which will help me get games in. I also discovered that I can just lay out a game on my lounge floor to get a large battle in. Again, will help me get games in.

Starport Scum: I have a shopping list with multiple expansions of this game on. I haven't bought them yet. Until last night I hadn't played since November 2016. But again I have characters and some storylines I want to explore, which will help me get games in. The rules are great, although last night I had a sudden  panic that I wasn't enjoying them anymore. But I feel like it was ,ore to do with my lack of proper campaign preparation than anything. I have been really thinking about the role playing elements of this game and hope to implement more of those also.

So all in all, I am happy with where my 6mm journey has been going.

OTHER NOTABLE THINGS that don't fall in the remit of this blog:
I became a dad again. That was amazing.
My marriage has matured to a very happy place right now.
I have lost 2.5 stone through Slimming World.
I am feeling more settled at work having been there a year.

This year has been a roller coaster and has ended in a very good place. I look forward to next year.
Posted by James at 10:27 pm No comments:

Edge of the Storm part 1: Youbos: The homestead.

Youbos is a dustball. On the edge of UCS space, the government presence is minimal. The sector Govenor is out to enrich himself, and as such cares little for the plight of the average citizen. On this planet, there is the barest minimum of regular UCS military forces, found in a small garrison on the planetary capitol city.

One of the only ways to make a living on Youbos is to farm moisture from beneath the desert, or from the air. It is on one such farm we find ourselves now: another evening, another shakedown by local "law enforcement". 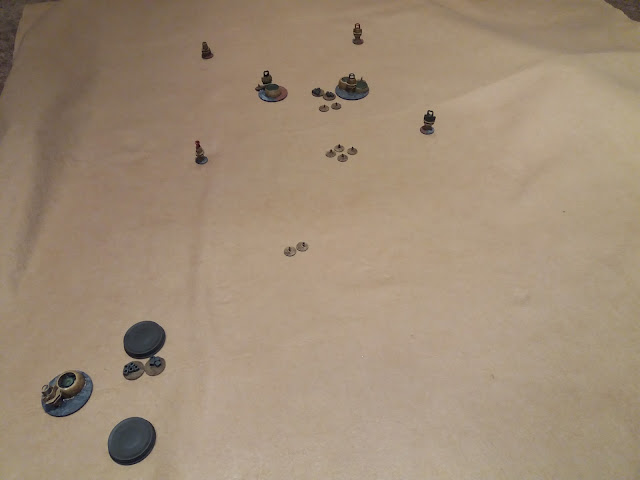 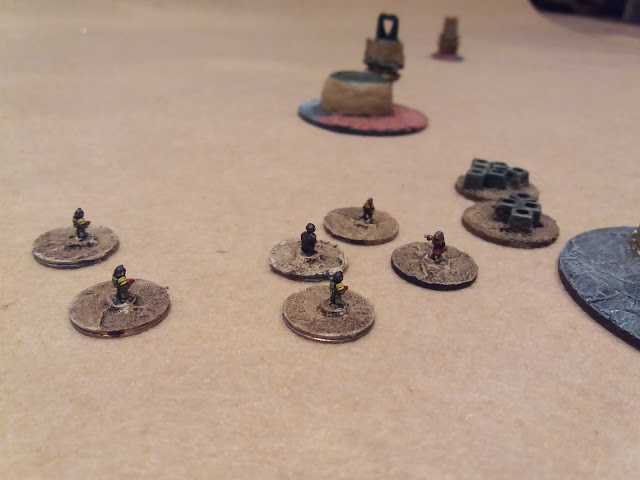 Pleasantries exchanged, the lawmen get down to business. Sara wants none of it. She has hired some help to disuade the uniformed thugs from bothering her again. Failing to reason with the men, she gives the signal to her help. 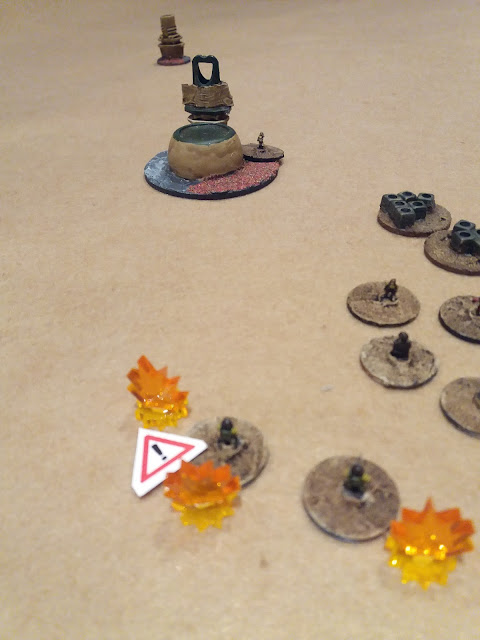 Corde Tane leans out from behind one building and opens up with her shotgun, pinning one thug and missing another. 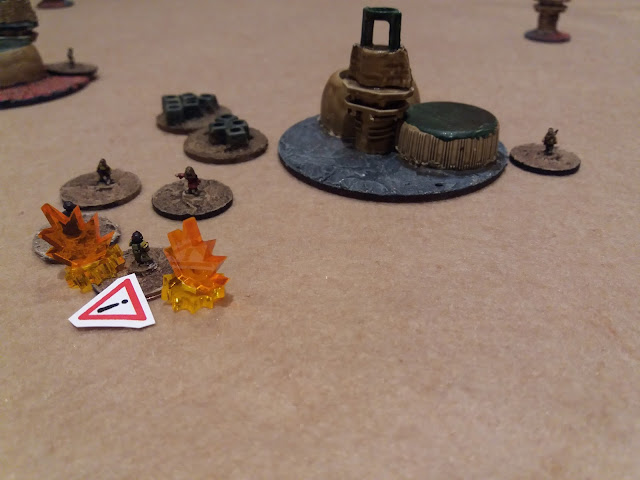 Ulrich Nolan pins another with a shot from his Lenherr rifle. The Lenherr rifle is designed to be used by large game hunters. It can punch through the armoured hides of some of the toughest creatures the galaxy can throw at you. This attribute has not gone un-noticed by those who would shoot at other humans though. 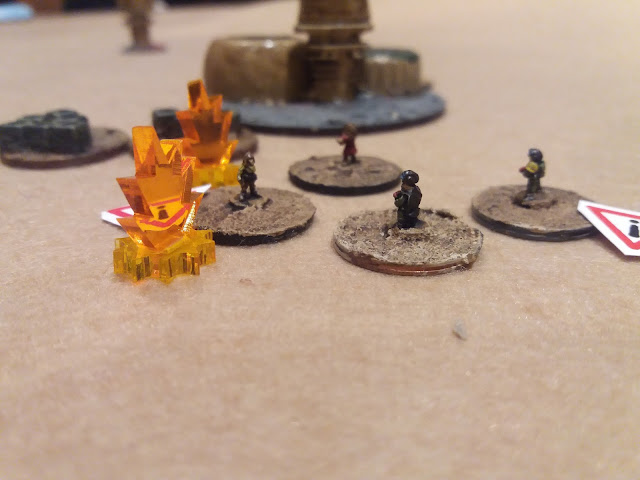 The squad leader opens fire on the farmers, wounding Jane. 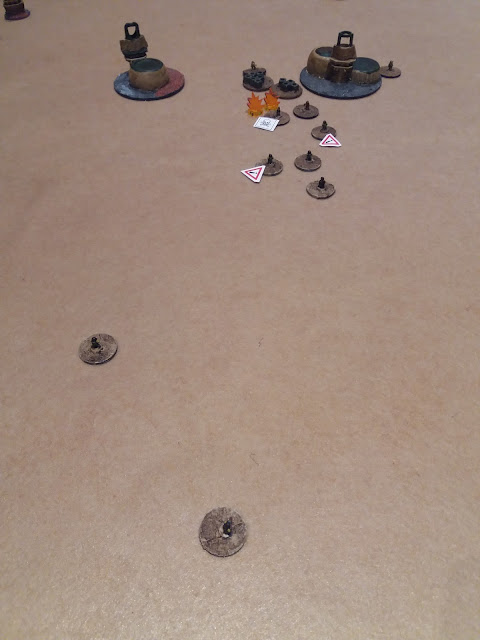 The squad's backup open fire, one being armed with an assault rifle. Jane falls in a hail of bullets, Sara looking over, unable to hide her emotions. 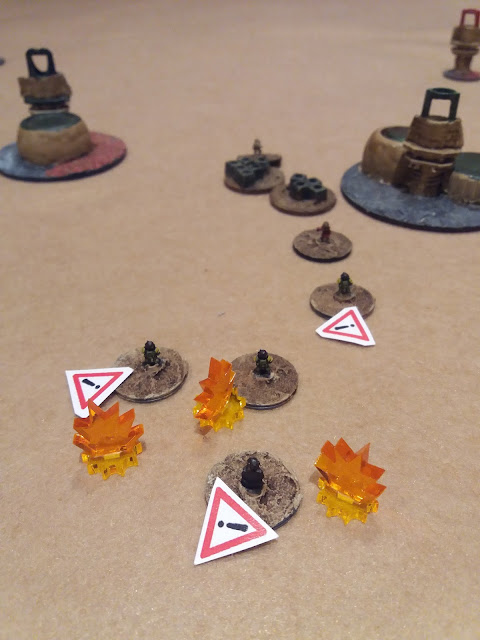 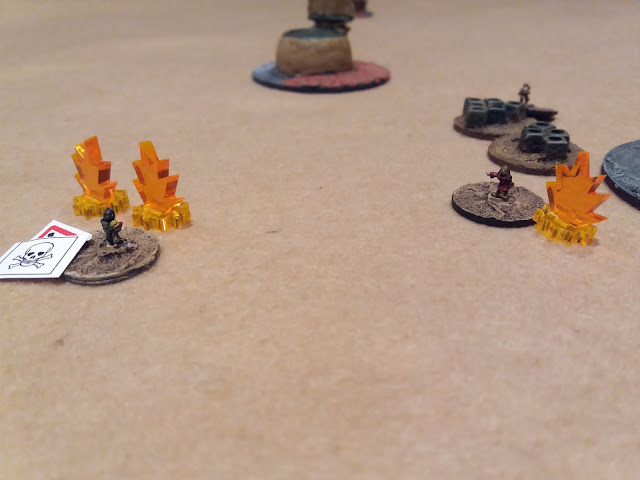 Sara and another lawman exchange fire, the lawman falling to the ground, hit by a shot to the head, dead before he lands. 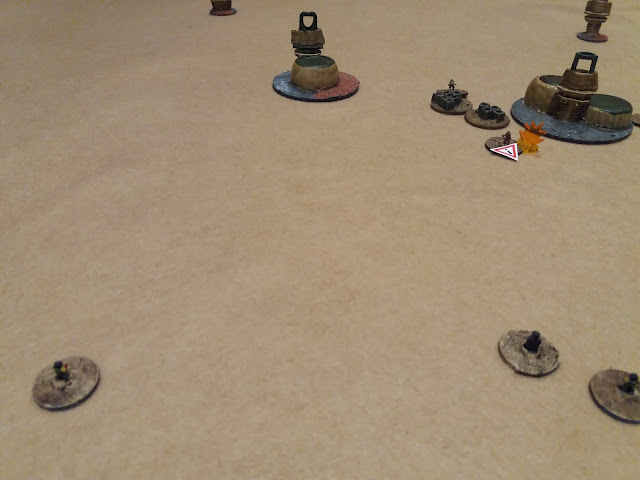 The lawmen keep Sara pinned down while they seek better cover. 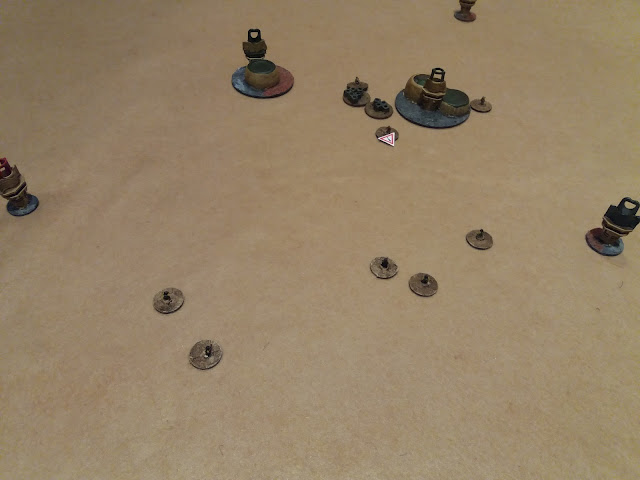 Having backed off, the lawmen decide to advance in order to end the firefight and loot the premises. 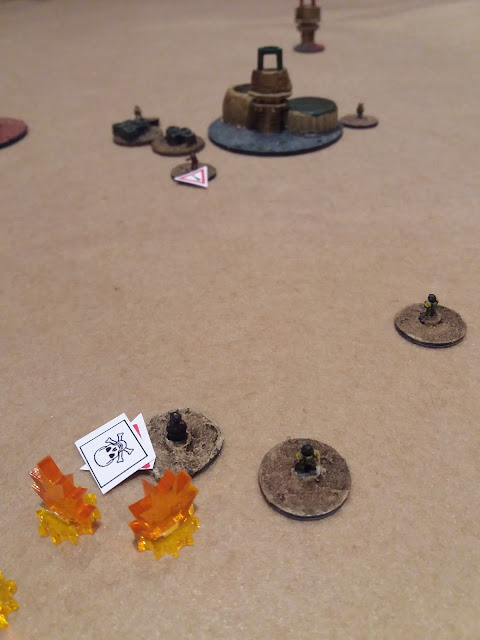 Caught in a crossfire the squad leader takes a few rounds, takes a few steps, then keels over bleeding. There is nothing his men can do for him. Shaken, they decide to fall back, return to town and regroup.


On their way back, Ulrich manages to take down another with a pinpoint shot.

Sara looks over the carnage: Jane is gone. Was it worth it? Three lawmen escaped and will surely be back in greater numbers. Ulrich and Corde forgo their fee, this is less about making money than it is about helping those in need.

"I could use some help packing. I won't be staying here" announces Sara.
"Sure thing, we will do what we can" replies Ulrich.
"We will need to go into town and get a flight offworld" says Corde. "We have another conract surveying potential colony sites in the Khalla sector. We could probably help you get work over that way, further away from the arm of UCS law?"


I went into town yesterday, alone. It was lovely being able to go without having to worry about my girls or having the boss wanting to go in her shops. I picked up a few new tops that aren't like tents (I have lost just over 2 stone since july), some paints to help me make a good white, and a sand coloured sheet of felt. I think it is perfect,  but what do you think? 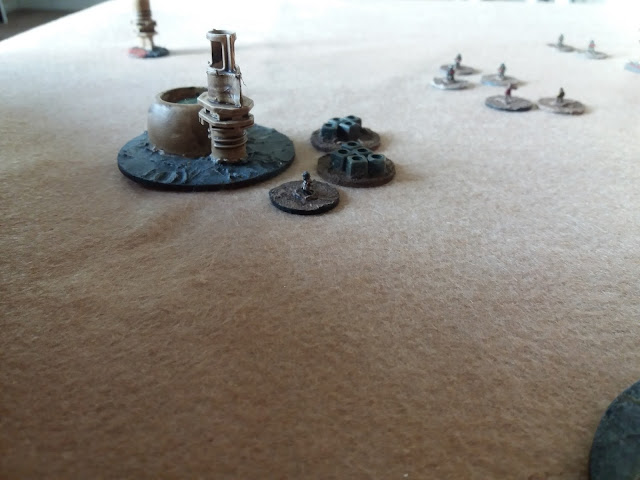 Another evening, another shakedown by local law. The protection rates have increased year on year, making it harder to make ends meet. 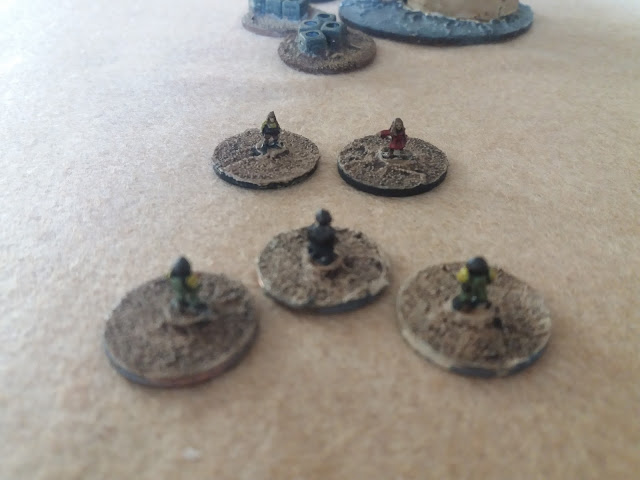 The moisture farmers come out to meet the lawmen...barely more than uniformed thugs enriching themselves and the often crooked UCS governor. 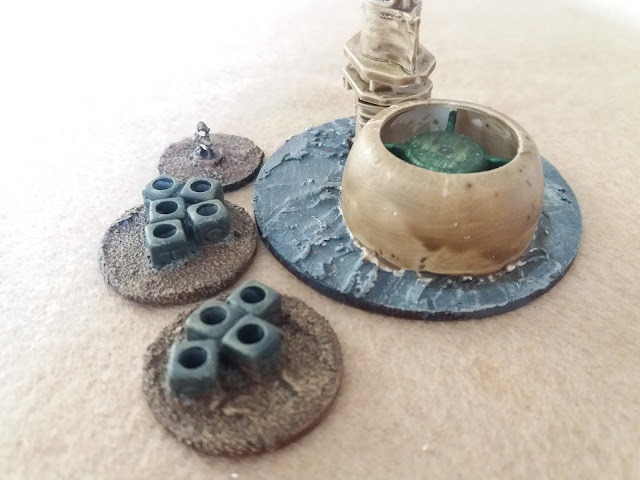 But this time the farmers have had enough. Hiding out of sight hired help is assessing the situation.

My wife was lovely and bought me a south African army from Brigade models. I love the infantry with their hats and was excited about the rhino tanks which I have ummed and ahhed about for ages.

Last night I based a few and primed them this morning with the last of my white spray.

I also put the final dry brush highlights on my terrain. 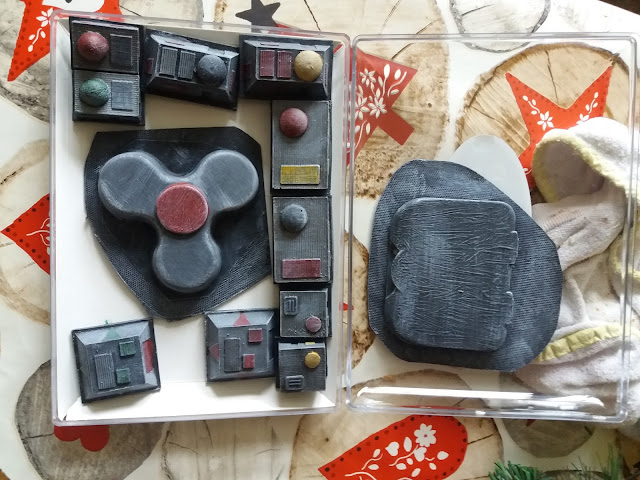 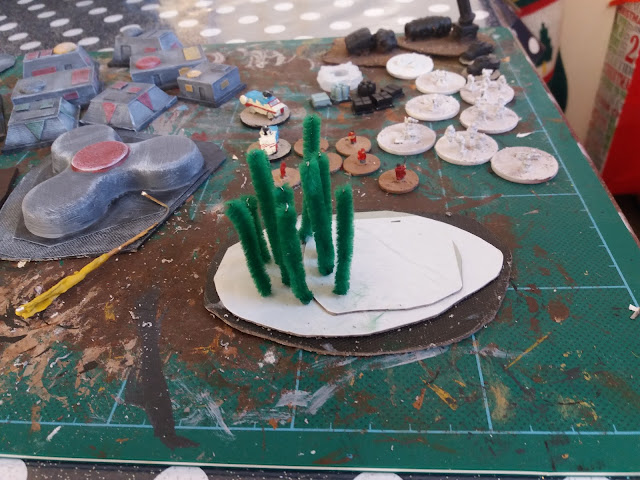 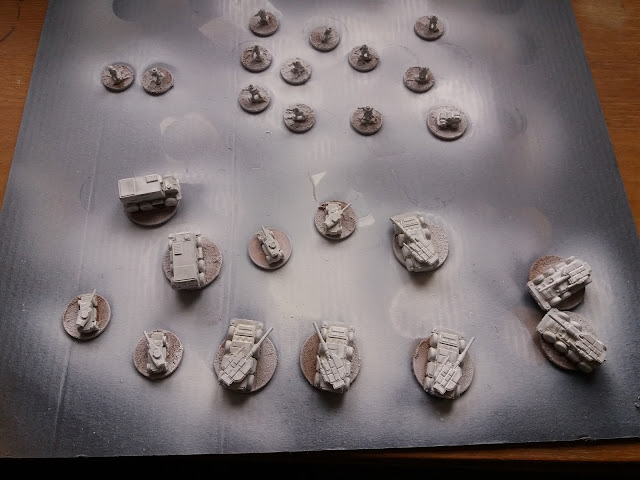