I love these MDF buildings from HACME, available over on Rapier Miniatures. They are a delight to put together and turn into terrain. I purchased two packets of the Normandy farm buildings at Colours 2016, and only now, nearly two years later are some of them pretty much table ready. I have two more stands not as ready as these, but I am confident that I will be setting up a WW2 game before the end of the year. They just needed a little bit of grass to make them pop. I now have dreams of making a small well and other random crap out of Green Stuff. 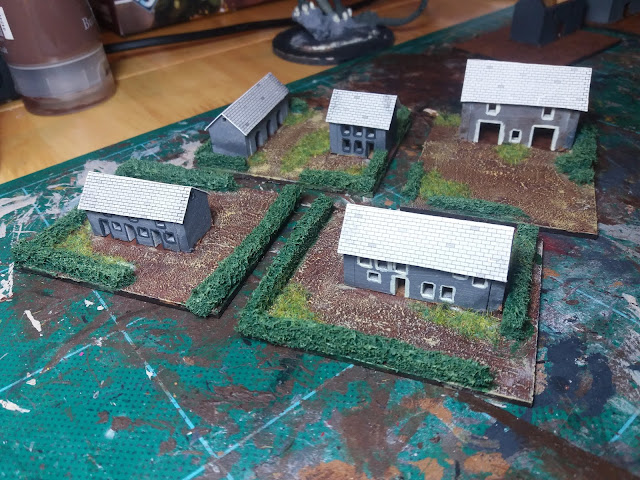 A few weeks ago my brother asked if I could paint some of his Imperial Assault miniatures from Fantasy Flight Games. I agreed as he gave me no time frame other than "take as long as you want". He also didn't offer to pay, nor did I ask him to. I love Star Wars and love painting. This will give me the chance to improve my 28mm (ish) skills with the benefit that I don't have to store them anywhere long term. 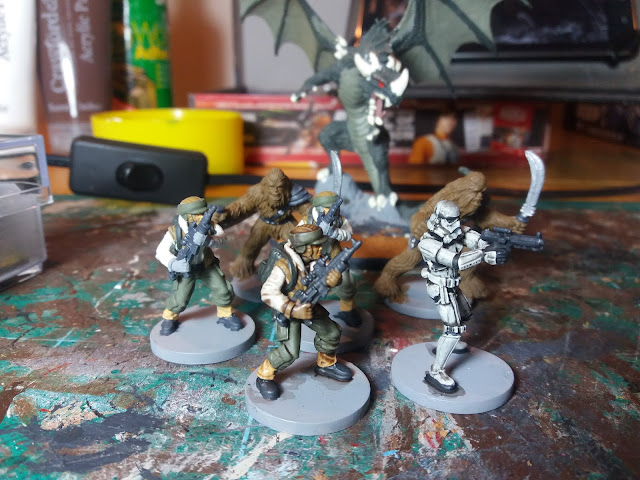 I am pleased with the stormtrooper so far. I need to highlight him. The rebel commando in the front also just needs a few highlights. The Wookiees and other rebels need to be washed then highlighted. Almost this convinces me to fork out cash for this game... or to just dust off my large collection of Reaper Bones miniatures, such as the dragon in the background which has been sitting around nearly finished for three or four years. Tonight I scraped off the cat litter from the base and textured it differently. The dragon will be finished next week and I keep threatening my wife to display it in our new display shelves in the lounge. More likely it will end up in my classroom.
Posted by James at 10:55 pm